You are here: Home › Naval Architecture › What is Cofferdam on Ships?
TwitterFacebookLinkedInPinterestBuffer

A ship operates using mainly four main kinds of liquids throughout its systems- fuel or diesel oil, lube oil, freshwater, and seawater. These liquids are stored at various places on the ship in their dedicated tanks. Apart from these, there are other liquids such as oily bilge and sludge are also generated on board from the working of machinery.

Thus, several numbers of tanks are provided onboard ships to store different kinds of fluid which are used or generated for normal operation of the marine engine and auxiliary machinery.

In an oil tanker, different grades of cargo are carried in a particular voyage, which needs to be kept separate to avoid mixing.

Since functions and properties of all liquids mentioned above are different, they are stored separately and care must be taken not to mix any two different fluids even when there is a leakage or failure in the boundaries of the tank separating them.

What is Cofferdam on Ship?

A cofferdam means an empty space provided in a ship so that compartments on each side have no common boundary; a cofferdam may be located vertically or horizontally. As a rule, a cofferdam shall be kept gas-tight and must be properly ventilated and of sufficient size to allow proper inspection, maintenance and safe evacuation.

It can be said that the cofferdam is a void or an empty compartment, which is provided between the tanks to prevent two different liquids from mixing with each other. This empty space avoids intermixing of two different fluid when there is a leak from the boundary separating the two liquids. 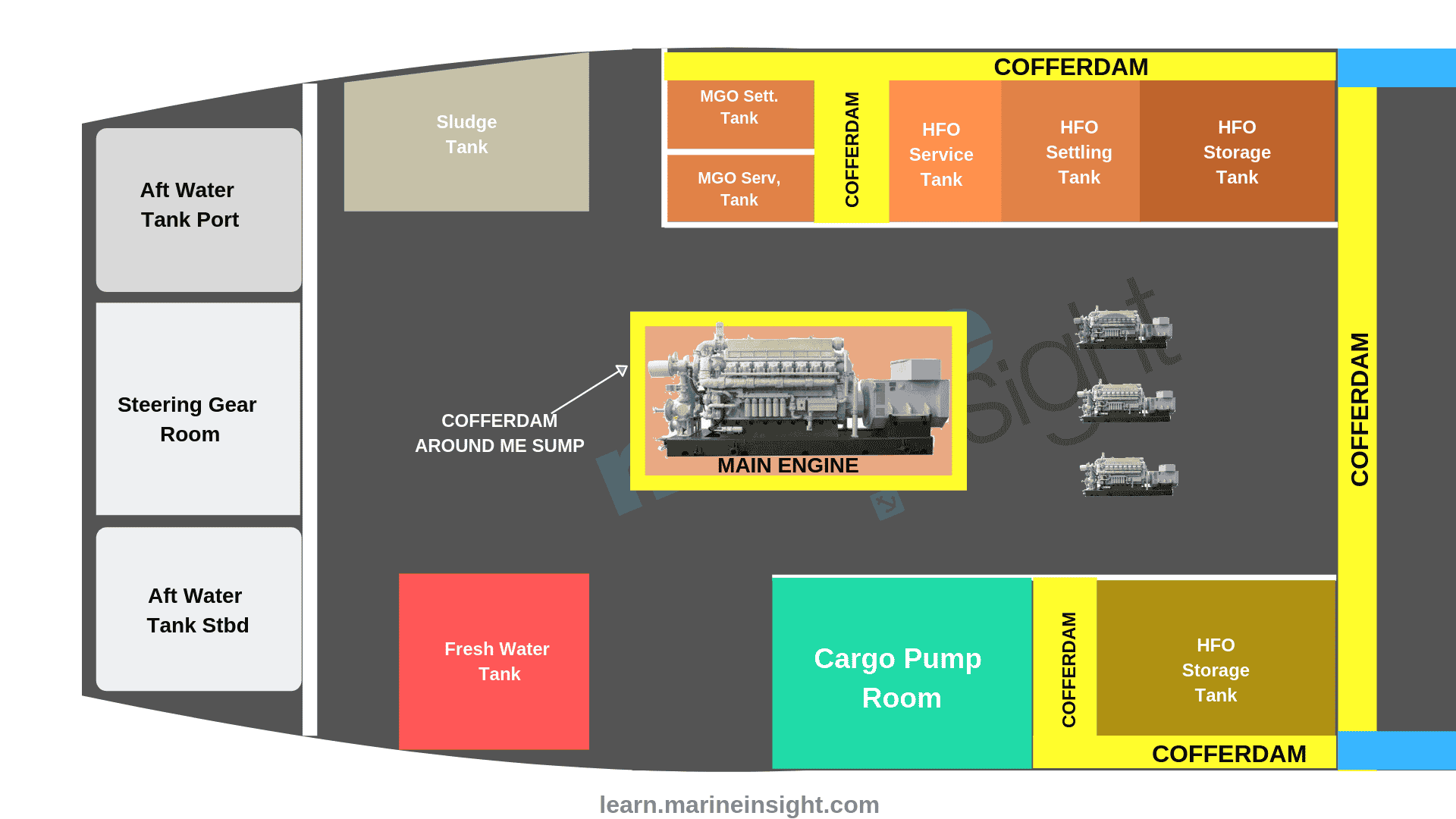 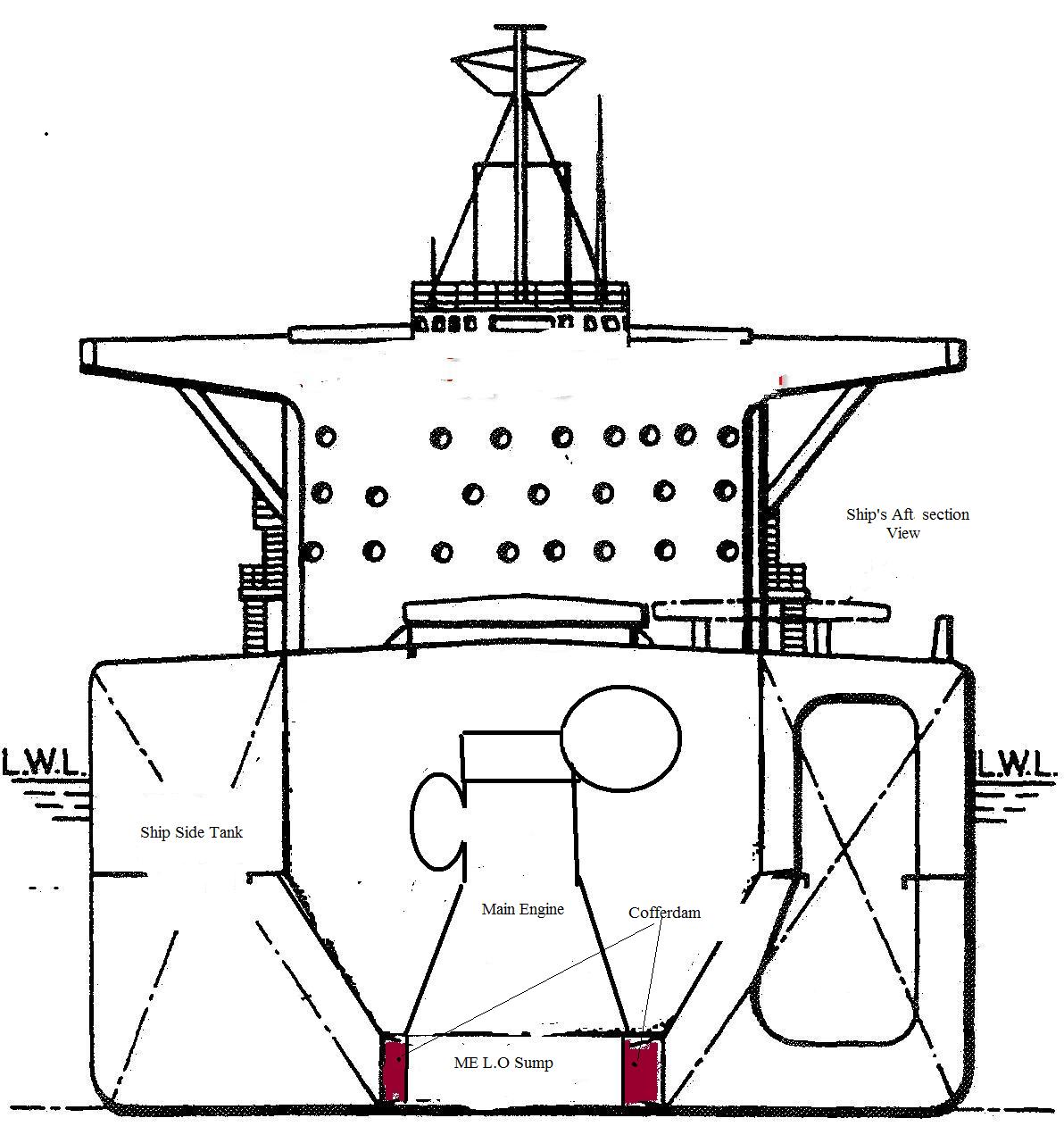 The cofferdam in a ship should be provided with stiffeners and girders to withstand liquid sloshing (in case of leakage), vibratory loads and other loads which may be imposed in service. While selecting the construction materials, especially for the equipment and fittings to be fitted in the cofferdam (such as a level sensor, vent and sounding pipes etc.), the contact spark-producing properties of the material should be considered.

The size of the Cofferdams shall be of sufficient enough for easy access for inspection, and they shall cover the entire adjacent tank bulkhead. The minimum distance between bulkheads should be 600 mm.

Manholes and lightening holes are also provided in the cofferdam. The lightering holes should not be cut in the bottom or top third of vertical web diaphragm plates of cofferdam as this may lead to buckling of the plate. 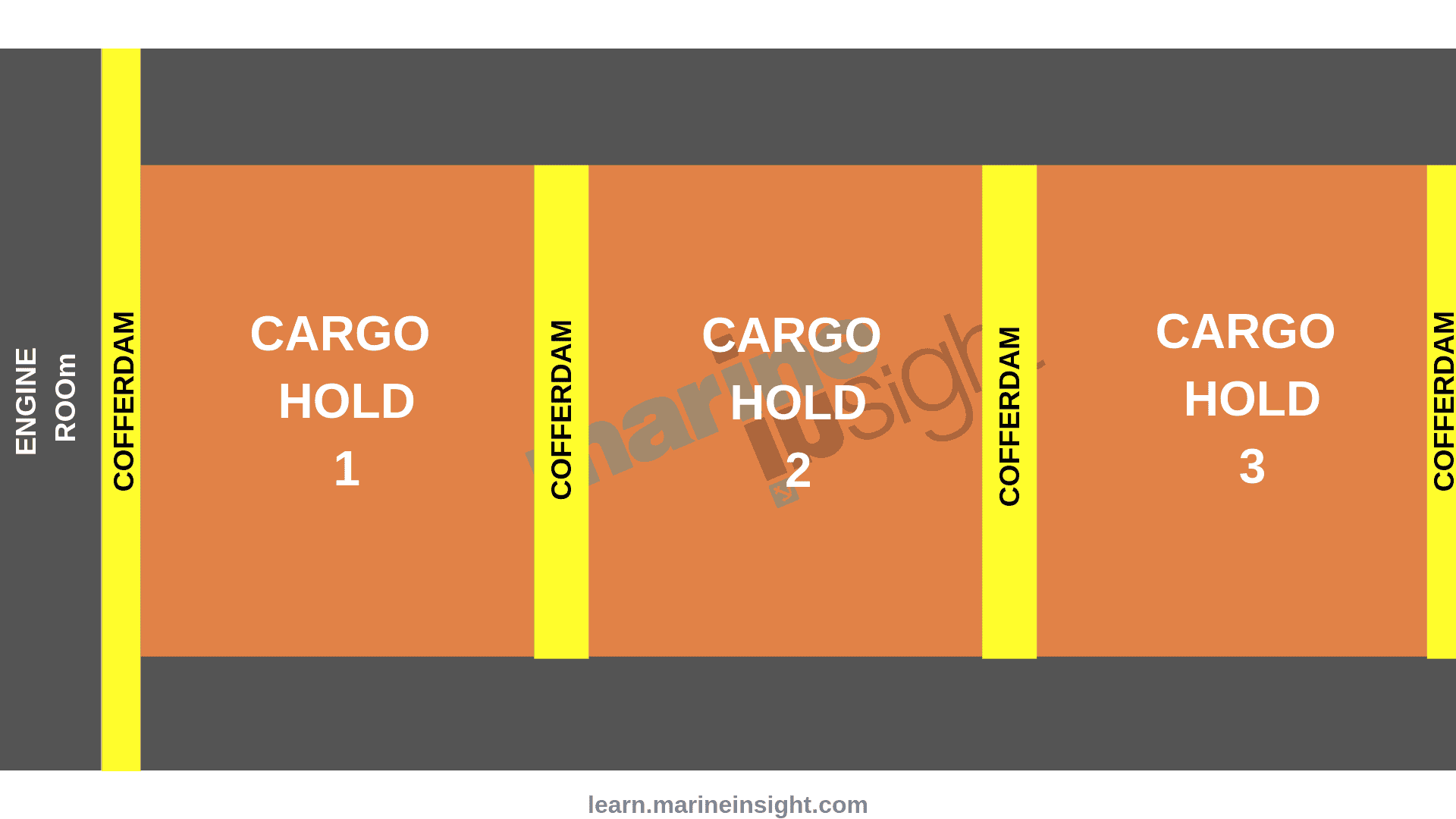 Where is Cofferdam Provided?

Cofferdam dam is there on all the ships. They are provided:

• Between fuel oil tanks which are installed inside the engine room. E.g. diesel oil and heavy fuel oil tank.
• Between freshwater tank and other engine room tanks adjacent to it
• Between lube oil tanks such as Auxiliary engine, main engine, or cylinder oil and lube oil storage tanks
• Between two oil tanks carrying different grades of fuel such as LSFO and HSFO
• The cofferdam is also installed around the main engine lube oil drain or sump tank, mainly to separate it from other double bottom tanks.

The main engine is provided with the bed plate which carries the oil sump. The bedplate is mounted and secured to the engine foundation plate using chocks and holding down bolts. The cofferdam helps engineers to access and inspect the holding down bolts and chalks for the engine.

In Oil Tankers, apart from the locations mentioned above, cofferdams are additionally fitted:

• Between the bulkheads of 1st cargo hold which is right adjacent to the machinery space/ accommodation of the ship
• The pump room in an oil tanker is also separated using cofferdam from the adjacent tanks
• Pump rooms and ballast tanks can be accepted as cofferdams; however, a ballast tank will not be taken as cofferdams if it is a protected slop tank 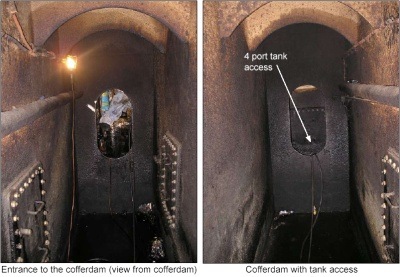 Criteria for cofferdam in tanker ships:

• Pump rooms and ballast tank which are considered as cofferdams in a tanker ship should not have any opening pipe room, double bottom, or any other enclosed space unless that opening is provided with gas-tight bolted manhole covers.

• Cofferdams on such spaces must be provided with sounding and air vent pipes. The air vent pipes from the cofferdam must lead to the atmosphere, and it should be fitted with flame screens near the outlet.

• Where a corner-to-corner situation occurs between a non-hazardous space and a cargo tank, a cofferdam created by a diagonal plate across the corner on the non-hazardous side may be accepted as separation. Such cofferdams shall be ventilated if accessible or filled with a suitable compound if not accessible.

In an oil tanker installed with Framo cargo pumping system, a cofferdam is used for the pump to form a guarding area which separates the hydraulic section of the pump, and also acts as a space to fit seal monitoring equipment. The Framo pump cofferdam helps the engineer officer to check and assess the seal condition.

Purging of the cofferdam should be done prior to and completion of every cargo operation. When the ship is on a long voyage, framo pump cofferdam purging to be done once in two weeks.

Can cofferdam be called a void space?

As explained above, the cofferdam is a type of void or empty compartment; however, the terminology of “Void space” is used for another purpose on a seagoing vessel.

A “Void space” is also a type of enclosed space and it is usually provided in the cargo area of the ship. It is typically present on the external part of the cargo containment system.

The void space is also the result of constructional arrangement for strengthening the ship structure. Unlike areas such as ballast tank, cargo pump room, pipeline space etc. which are accessed by a human for inspection, the void space is not visited frequently for inspection as this space has no commercial or operational usage. 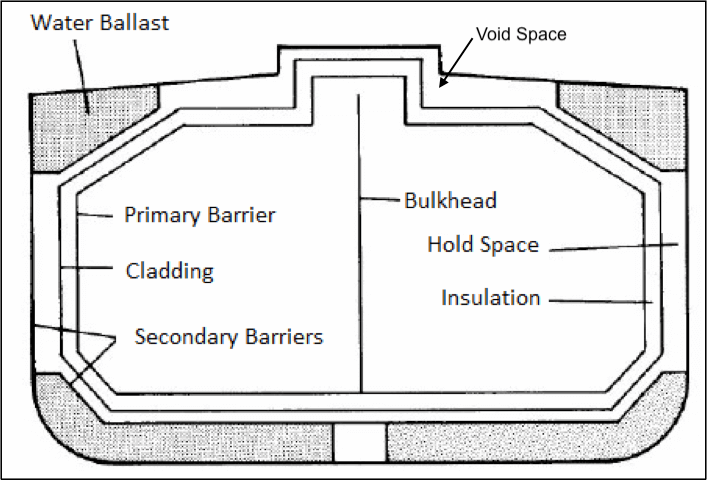 A cofferdam can be tested separately by filling it to the top. Avoid testing the cofferdam in dry dock when there is no side pressure from outside or with all the adjacent tanks empty as this may give rise to large stresses on supporting structure and material.

A cofferdam must be considered as a type of enclosed space, and all enclosed space entry precautions must be taken before making an entry in the same.

Different Types And Designs of Hatch Covers Used For Ships

Top 10 Shipbuilding Companies in the World in 2012

Stopping a Ship: Why Ships Cannot Have Brakes?