You are here: Home › Naval Architecture › How The Power Requirement Of A Ship Is Estimated?
TwitterFacebookLinkedInPinterestBuffer

One of the most important stages of a ship design process is the estimation, calculation and optimisation of a ship’s power requirements. Why? Because the power of a ship is a deciding factor for many other aspects of the industry- both the market and the environment.

A ship with more power requirements will automatically require larger amounts of fuel for each run of voyage, resulting in a hike in fuel expenses for the owner. Also, according to the recent trends, the overall efficiency of a ship is quantified by Energy Efficiency Design Index (EEDI). The lesser the EEDI of a ship, more is the efficiency of the ship from an environmental and societal point of view. As the EEDI of a ship being proportional to the power required, it is always preferred by the designers to reduce the power requirements of a ship by every way possible. It reduces the EEDI, and in turn, brings down the carbon footprint of the ship.

Before we go into the core topic of this article, let me tell you what this article is about. In this article, we will first look at the ways of determining the power requirements for Marine Diesel Engines and Diesel Electric Propulsion Systems (note that the methods of estimating the power ratings for both the systems are quite different from each other). However different they may be, the first step is always the same, regardless of the type of propulsion system that is to be used by the ship, as discussed below.

The First Step: Calculate the Resistance of a Ship

In order to calculate the resistance of a ship, the first step is to conduct a towing tank test. In case of new hullforms, a towing tank test is preferred. However, if the hullform of the ship in design has already been tested in a tank, it is preferred to just follow the scaling method (Which we shall discuss soon).

In a towing tank test, the resistance of the model scale is obtained in the computer of the carriage. This is then scaled up to the ship’s scale by using a set of steps recommended by International Towing Tank Conference (ITTC).

An Interesting Tip: If you now rate the ship’s engines to the obtained effective power, the ship should move at the design speed. Right? But if you actually did, the ship would only be able to operate at a speed lower than this. We will discuss the reason as we proceed.

The Second Step: Decide on the Type of Ship Propulsion System

This is one of the most deciding steps of the entire process. Selection of the wrong type of propulsion system may result in an economic catastrophe for the ship in future. Years of experience and research has now provided us with a clear idea as to what kind of propulsion should be preferred on different kind of ships.

Diesel-Mechanical Propulsion is preferred in most cargo ships which require low speed operations and lower operating costs (operation costs for Heavy Fuel Oil used in Marine Diesel Engines is lesser than operating costs of Diesel Electric Propulsion Systems). In the recent times, slow steaming has become an efficient method to counter the effects of the maritime recession, and diesel propulsion is hence preferred in most cargo ships (bulk carriers, oil tankers, container ships).

Diesel Electric Propulsion is preferred in ships which require more electric power (for example cruise ships require more electric power to run its facilities, drillships that require dynamic positioning systems for most of the time of operation, etc.) and ships that require undisturbed operations with varied torque (for example, tugs). This is one of the most notable advantage of diesel electric propulsion. Where diesel mechanical propulsion systems do not offer high efficiencies at all torques, diesel electric propulsion systems can operate at high efficiencies at almost all torque variations. 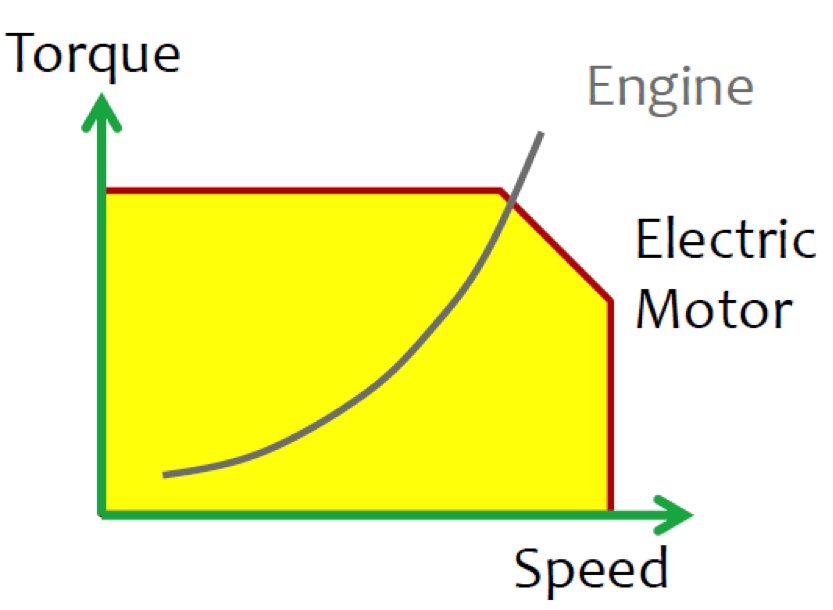 In the above graph, it is evident that the torque supplied by the Engine (diesel engine) varies with speed. That is, higher torque can only be obtained at higher operating speeds. But if higher torques (of propeller) are required at lower speeds (which is the case of tugs and dynamic positioning systems), an electric motor (which is used in diesel electric propulsion systems) stands out.

The Third Step: Estimate the Engine or Diesel Alternator Ratings

Remember the question we had raised in the tip above? Why would the ship not operate at design speed if we rated the engines at the effective power?

> The resistance calculated from the towing tank tests is only the bare hull resistance, that is, the effect of the propeller is not considered in the above. Whereas, when a propeller operates behind the ship, there is the following we must consider here:

Resistance of the ship increases from the value calculated in bare hull condition. The propeller must operate at a torque that is sufficient to overcome this augment in resistance and also enable the ship to overcome its bare hull resistance.

> The power at the engine output (i.e. shaft input) is not fully obtained at the shaft output. This is because of the frictional and heat losses that occur along the length of the shaft. These are termed as shaft losses. Shaft losses are usually taken as 2 percent.

> In case of smaller ships where high rpm engines are generally used, reduction gearboxes are used to reduce the shaft rpm, or operated at various RPMs. The losses induced by the gearbox are classified under gearbox losses. Gearbox losses range from 4 to 5 percent.

> The resistance estimated during the design phase does not consider the effect of waves. Due to the action of waves, the actual resistance on a ship is higher than that in calm water conditions. Hence, a margin of 15 percent is considered as sea margin, and the engine power is rated so that it overcomes the sea margin.

> It is always desirable to keep specific fuel oil consumption as low as possible. For marine diesel engines, the Specific Fuel Oil Consumption (SFOC) is minimum when the RPM of the engine is corresponding to 85% of maximum continuous rating (MCR). Which means, that the design speed should be attained, not at the rated MCR but at 85% of the MCR. So to obtain the MCR, the corresponding factor of 0.85 is considered.

The following table shows a calculation that is used to obtain the rated engine power from the effective power of twin-engine ship using the above factors: 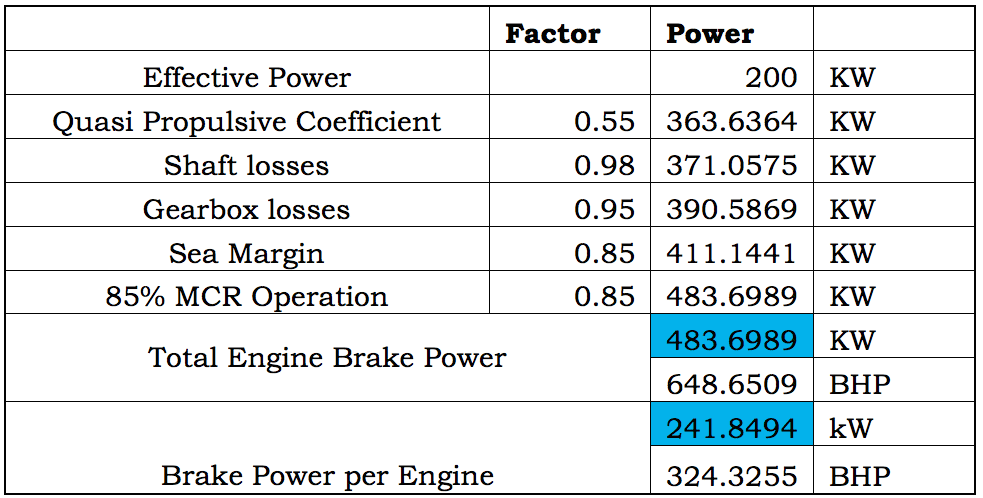 The basic components of a diesel electric propulsion system are:

Diesel Generators, Transformers, Electric Motors and Loads. Now, the loads on the system may be a electric motor driven propulsion pod, or a bow thruster, or any component of hotel load (lighting, HVAC, etc.) 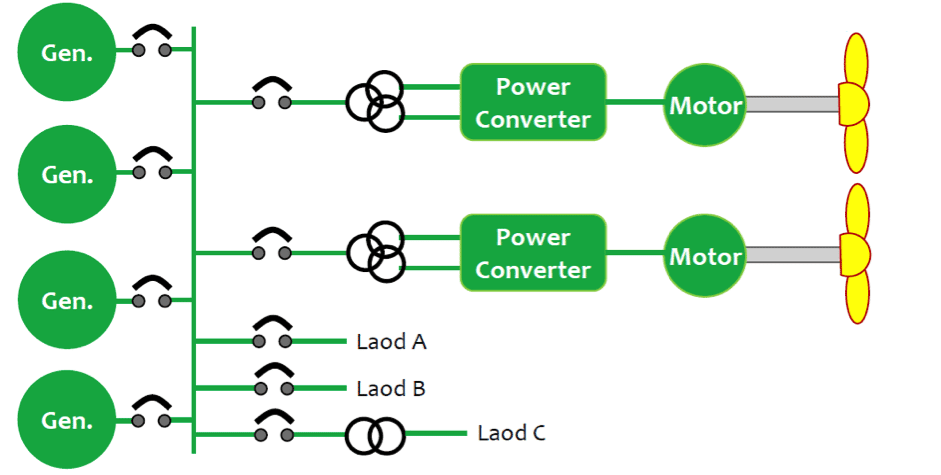 In this case, the electric propulsion motors, propellers and other loads together form the load of the entire power plant. But it is to be considered that not all loads will be in operation in every condition. For example,

In case of Dynamic Positioning Operations, both hotel loads and propulsion units will be in operation. So in this case, the load on the diesel generators will be maximum.

First, in order to calculate the total power requirement, designers prepare a Load Chart which lists out all the electrical loads on the ship. And the load chart is prepared, taking into consideration three operating conditions in general:

In the load chart, the power requirements of each electrical load on the ship is calculated by multiplying the Maximum Rated Power of the component with two factors:

Load Factor: It is the ratio of the operating power to the maximum power rating of the component.

Utility Factor: It is a factor which determines the extent of operation of the particular component in a particular condition.

For example, for a steering gear equipment:

In the similar manner as illustrated above, the load chart is prepared for all the electrical components on the ship. A sample of the same would look like the following: 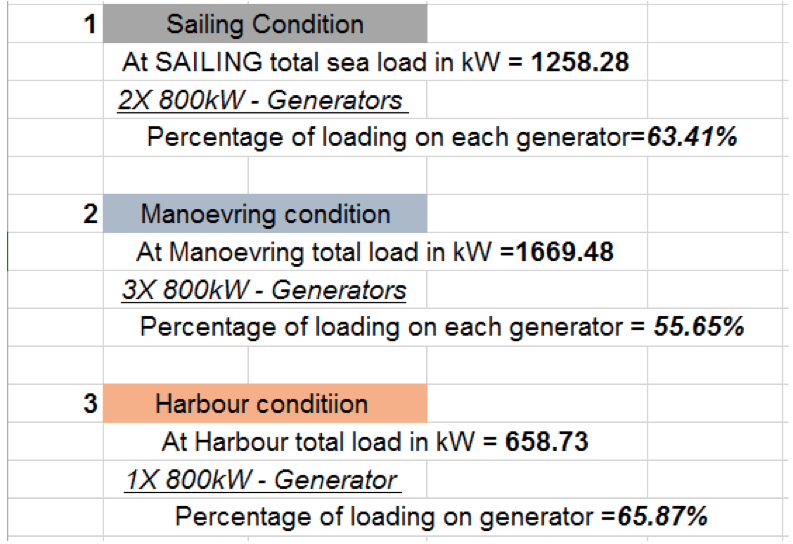 Figure 4: Determination of Total no. of generators

The two rules to be followed in deciding upon the number of generators are: