For large bedplates the material used can be cast or prefabricated steel or a mixture of both. The important requirement for large engine bedplate is to use material with low carbon steel with maximum carbon content of 0.23%. For small bedplate, cast iron with internal vibration damping characteristics is used, which reduces the frequency of cracks in the bedplate. The main components of any bedplate are longitudinal and cross girders.

The important functions of bedplate are:

It is important to keep a regular check on the bedplate as it’s the foundation of the marine engine. The inspection of bedplate is also included in the planned management system of engine. 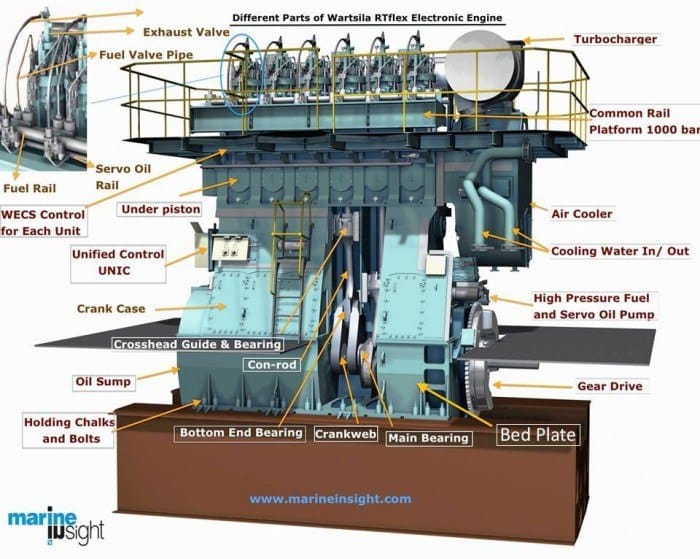 Following checks to be carried on the bedplate during inspection:

Cracks: Cracks is the most common problem that occurs on the bedplate structure. Following areas to be carefully checked for cracks:

Faulty welding: It is to be checked on newly delivered engine or if any welding repairs are carried out in the recent past

Corrosion: As the bedplate is the bottom structure fitted in the bilge section of the engine room, it comes in contact with various fluids such as oil, water etc. and therefore is prone to corrosion. A close check should be made for identifying corrosion.

Loose Frames: The bedplate is held together with A frame and entablature of the engine by means of tie rod. Check the tie rod is tightened and there is no loose portion between the frame and bedplate.

Oil leakages: The bedplate is also responsible to collect the lube oil and transfer it to engine sump. Check for any oil leakage from the bedplate or the joint between the bedplate and the frame.

Ship’s engineers are responsible to ensure that marine engine bedplate is inspected at regular intervals of time and all faults are identified and repaired at the earliest. Failing to do so will result in heavy vibrations, misalignment of crankshaft, and reduction in engine efficiency and failure of engine components.

Do you know about any other important points to be noted while checking engine room bed plate?

How To Clean Blower and Turbine Sides of a Turbocharger on Ship?
10 Extremely Important Checks Before Starting Marine Engines On Ships