The safety of a ship in damaged condition is majorly dependent on the strength and integrity of its watertight bulkheads. There are a lot of factors that go into deciding the position of watertight bulkheads in a ship, and designing them structurally.

Watertight bulkheads are vertically designed watertight divisions/walls within the ship’s structure to avoid ingress of water in the compartment if the adjacent compartment is flooded due to damage in ship’s hull.

The position of the bulkheads along the length of the ship is primarily decided by the results of flood-able length calculations during the assessment of damaged stability of the ship. However, once their positions are fixed, there are a lot of factors coming into play, for example: types of watertight bulkheads, their uniqueness based on their position, structural design, etc.

However, the position of the collision bulkhead should be such that maximum cargo storage volume is achieved.

Related Reading: 12 Maritime Books All Seafarers Must Have 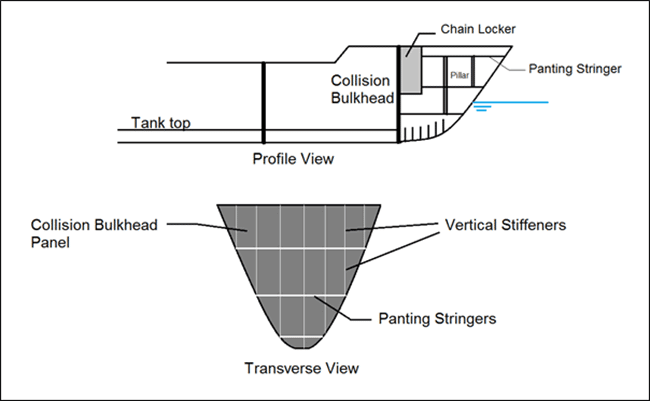 As per SOLAS rules,

What makes a ship unstable?

In small ships, a transverse bulkhead may be constructed from a single plate. However, for larger ships, the plating of a transverse bulkhead usually consists of a series of horizontal strakes welded together. But what’s interesting here is that, the thickness of these strakes increase with depth, in order to strengthen the bulkhead against the maximum hydrostatic pressure in case the compartment is fully flooded. So prior to erection, two dimensional strakes are first cut out from plates of different thicknesses.

The bulkhead plate itself is not resistant enough against large scale transverse forces like shear forces. So they are stiffened, either vertically or horizontally. But we usually go for the vertical stiffening instead of the horizontal. Why? Because horizontal stiffening in ships with high beam would require stiffeners of long span, which would also increase the scantling and weight of the stiffener, affecting usable cargo volume. However, with vertical stiffening, the span (and hence, the scantling) of the stiffener can be kept low by introducing a stringer at mid-depth (a stringer acts as a fixed end, therefore reducing the span). 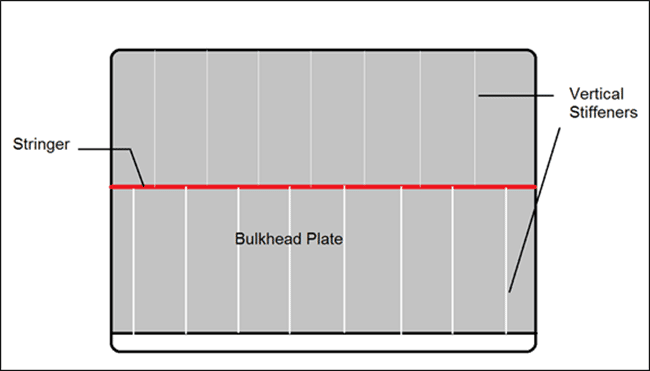 The sections used for stiffening the bulkheads are usually flat bars, angles or bulb bars, depending upon the required section modulus. An important aspect of the design of bulkhead stiffeners is meeting the end conditions. In order to meet the boundary conditions so that the stiffeners respond as per the theoretical calculations, their end supports must be designed accordingly. At the upper end, they are attached to the underside of the deck plating with brackets, providing a hinged boundary condition. To achieve fixed ends, they are welded directly to the deck plate and the stringer.

Most modern day ships use an advanced technology to achieve the required strength of bulkhead plates. They use corrugated bulkheads instead of stiffened ones. The corrugations are in the vertical direction, except when the breadth of the bulkhead is significantly low. However, there is one trade-off that needs to be made here. Since the corrugations are provided on the bulkhead plate right in the early fabrication stage, corrugated bulkheads are made of plates having uniform thickness (which is, the thickness equal to the lower most strake in case of a conventional bulkhead). This increases the weight of the bulkhead when compared to a conventionally stiffened bulkhead. In spite of this, usage of corrugated bulkheads come handy due to ease in fabrication and reduction of welded joints on the bulkhead. 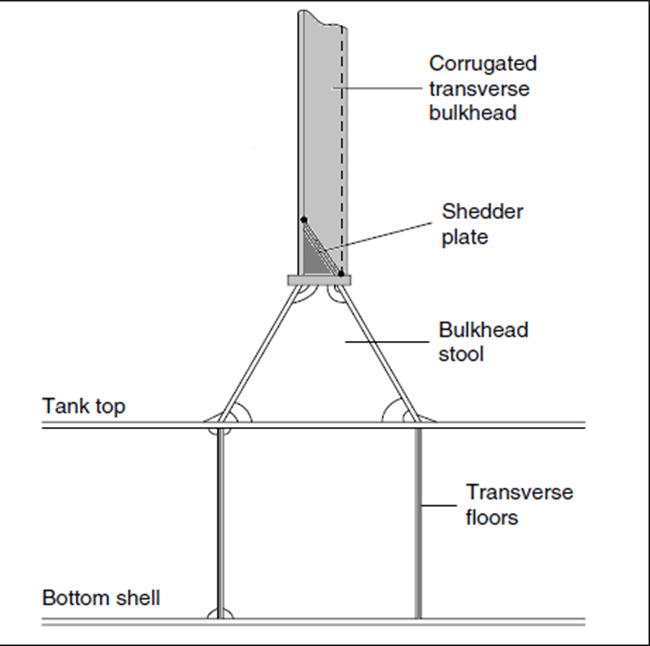 Figure 3: Elevation of a corrugated bulkhead.

The above figure shows the elevation of a corrugated bulkhead from the side. In case of bulk carriers, in order to prevent accumulation of cargo at the base of the corrugations, the lower end of the bulkheads are provided with angular plates called shredder plates, which help in shredding the dry cargo to the tank top. The bulkhead is connected to the tank top by a bulkhead stool, which is fillet welded to the tank top plate. The two forward and aft ends of the stool is to be in line with the transverse plate floors. This ensures proper stress flow from the bulkhead to the plate floors. 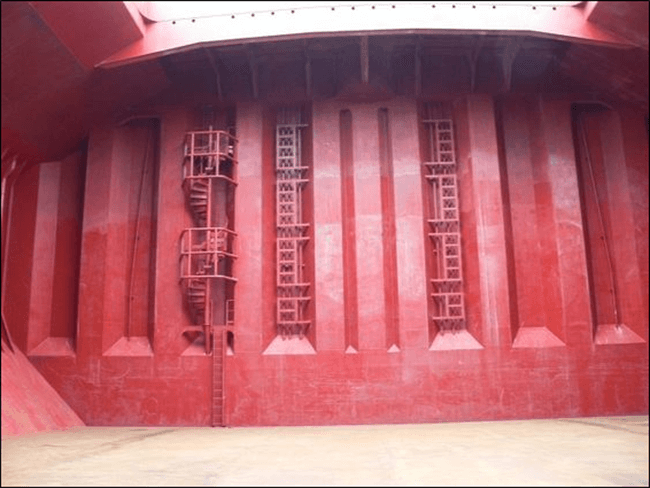 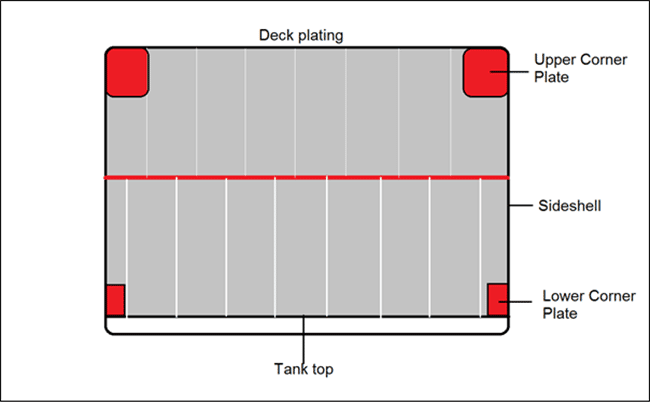 After installation of the bulkheads, they are to be tested for their integrity and water tightness. Since it is not feasible to fill all the cargo holds or compartments with water for this purpose, the test is done by a pressure hose. In this process, the bulkhead is subjected to a prerequisite water pressure from a hose for a fixed period of time, after which, the structural integrity of the bulkhead is inspected (checks are done for buckling and other deformations). Leak tests can also be done by pressurising the air in a compartment and checking for leakage of air to the other compartment.

Intactness is the primary purpose to be maintained by a watertight bulkhead. But in most ships, there are situations unavoidable where access from one compartment to another is a necessity. For example, an under-deck access from one cargo hold to another or from one compartment to another in case of passenger ships. In most ships, access to the shaft tunnel is necessary especially to monitor shaft oil temperatures or for repairs in the region. This purpose is solved by the use of watertight doors.

The bulkhead panel is usually cut out in a rectangular shape accommodating a watertight door. However, special incorporations are made in the structural design of the region around the door opening: 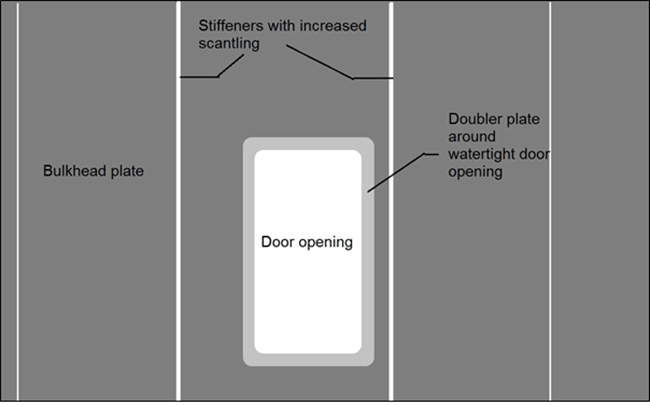 Figure 6: Opening for watertight door on a bulkhead plate.

Watertight doors are usually hydraulically or electrically operated, and are either horizontally or vertically sliding. The reason why swinging doors are not provided in watertight bulkheads is because it would be impossible to close a swinging door in case of flooding. It must be easily operable even when the ship has listed to 15 degrees to either side, and the control system should be so designed that the door can be operated from the vicinity as well as remotely, i.e. from a position above the bulkhead deck. In all ships, visual indicators are provided at the remote control location to denote whether the door is open or closed.

Watertight doors are also subjected to pressure tests after installation to check for their structural integrity at design hydrostatic pressure in case of complete flooding up to the bulkhead deck.

One of the most important regulations to be complied with during the design of watertight bulkheads and doors are that of SOLAS, and some important ones are discussed below:

In order to prevent the propagation of fire from one compartment to another, all watertight bulkheads are also provided with fire-resistant paneling. However, depending on the extent to which bulkheads can retain the fire and smoke to the affected side, they are classified into three categories:

Class-A Panel: All watertight bulkheads are Class-A type. Bulkheads of Class A must be constructed of steel or equivalent material and should pass the standard fire test, preventing the passage of fire or smoke to the unaffected side for at least one hour. With Class A bulkheads in use, the average temperature on the unaffected side must not exceed 120 degree Celsius. Added to that, there are three categories of Class A panels depending on the time up to which the temperature at any point on the bulkhead must not rise above 160 degree Celsius:

Class-B Panel: Bulkheads of Class B are constructed of materials that are approved by SOLAS and classification societies as incombustible materials. And should pass the standard fire test, preventing the passage of fire or smoke to the unaffected side for at least thirty minutes. With Class B bulkheads in use, the average temperature on the unaffected side must not exceed 120 degree Celsius. There are two types of Class B panels depending on the time up to which the temperature at any point on the bulkhead must not rise above 206 degree Celsius:

Class-C Panel: Class C bulkheads and decks are constructed of materials that are approved by SOLAS and classification societies as incombustible, but they are not required to meet any requirements related to rise in temperature or passage of smoke and flame to the unaffected side.

Class A and B panels are used adjacent to most of the enclosed spaces within the ship, for example: cargo holds, control stations, stairways, lifeboat embarkation stations, galleys, machinery spaces, tanks, public spaces and accommodation areas. Class C panels are mostly used in open decks and promenades, where requirement of fire safety is minimum. They can also be used between two similar spaces if they are not separated by a watertight bulkhead, in which case a Class A panel is mandatory.