The hull of a ship is the most notable structural entity of the ship. To define the hull, it can be said that it is the watertight enclosure of the ship, which protects the cargo, machinery, and accommodation spaces of the ship from the weather, flooding, and structural damage. But this alone does not suffice our requirements of understanding all the aspects of a ship’s hull.

In this article, we will see how the hull of a ship is designed for various factors taken into consideration during the entire lifetime of the ship, and how the design of a ship’s hull plays the most important role in the entire ship design and shipbuilding project. 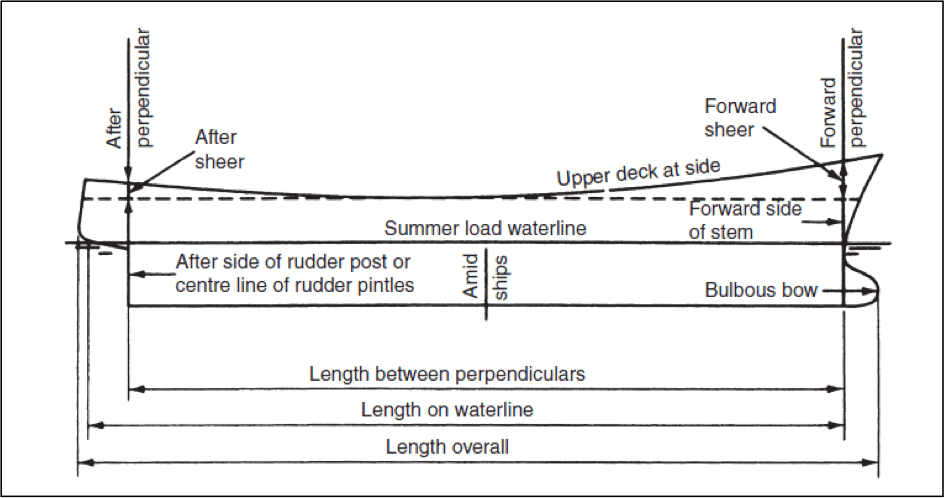 The above figure shows the schematic profile of a conventional ship’s hull. Understanding the meaning and applications of the nomenclatures related to it forms the basics of understanding ship design and shipbuilding technology.

Sheer: The upward curve formed by the main deck with reference to the level of the deck at the midship, is called sheer. It is usually given to allow flow of green water from the forward and aft ends to the midship and allow drainage to the bilges. The forward sheer is usually more than the aft sheer to protect the forward anchoring machinery from the waves.

Summer Load Line: The summer load line is the waterline of the ship at sea water when it is at its design weight and ballast conditions. It is also called the design draft; this forms the reference for all other load lines of the ship.

Length of Waterline: The length of the ship’s hull at the summer load line is the length of waterline for the ship. This length plays an important role in the calculation of hydrostatics of the ship, as well as propeller design calculations.

Length Overall: The length between the forward-most and aft-most point of the ship’s hull is its overall length. This length plays a major role in designing the docking and undocking plans of the ship. In shipyards where multiple building docks are available, the overall length, beam, and depth of the ship is a deciding factor in choosing a suitable building block for the ship.

The first step in designing a hull of a ship is designing its shape and form. The form of the ship’s hull is estimated by means of various form coefficients, discussed as follows:

The value of block coefficient is one for a ship with the rectangular cross-section. Hence, for a typical ship’s hull form, it would be less than one. The higher the block coefficient, the fuller is the hull form (e.g. oil tankers, bulk carriers). Finer hull-forms have lower block coefficients (e.g. container ships, warships).

Midship Coefficient: The midship coefficient is the ratio of the submerged area of the midship section to the enclosing rectangle. It is hence expressed as:

There are a number of other form coefficients like prismatic Coefficient, Volumetric Coefficient, etc. which are basically the parameters used to define the volumetric distribution of the ship’s hull along its length. Once these coefficients are arrived at, from statistical studies, the hull lines are developed.

The lines plan of a ship’s hull comprises of three views. To understand the lines plan, we first need to know what are buttocks and waterlines.

When the hull of a ship is cut into multiple sections longitudinally, that is, if you slice the ship’s hull at every two meters starting from port to starboard, you would produce longitudinal sections at every two meters. The contour of each longitudinal section is called a buttock line, and this is exactly what is represented in the profile plan, as shown below. The reference lines for the profile view are the stations (vertical grid lines, which denote the longitudinal position) and waterlines (horizontal lines, which denote vertical positions).

If the ship’s hull is sliced to form a section at every station, we obtain the body plan, as shown below. The typical practice of drawing the body plan is to denote all the half sections (due to the hull’s symmetricity). The sections forward of the midship are drawn on the right side of the center line, and all the sections from the midship to the stern are drawn on the left side.

The complete lines plan of a ship is arranged by placing the profile view on top, with the half breadth plan just below it, and the body plan to its right, as shown below. The lines plan provides for the foundation of developing not only the three-dimensional hull model, but also developing frame-wise structural drawings, general arrangement, and loft drawings at the shipyard.

Figure 5: Lines plan of a ship.

Step 1: Calculation of Loads on the Hull: This is where the classification society rules come into play. Rulebooks have specialized formulae for calculation of wave loads on the ship’s hull. The still water bending moment, wave bending moment, and shear forces are to be calculated using these formulae. These load values act as set points in the entire structural design process.

Related Read: Why Do Ship’s Hull Fail At Midship Region? 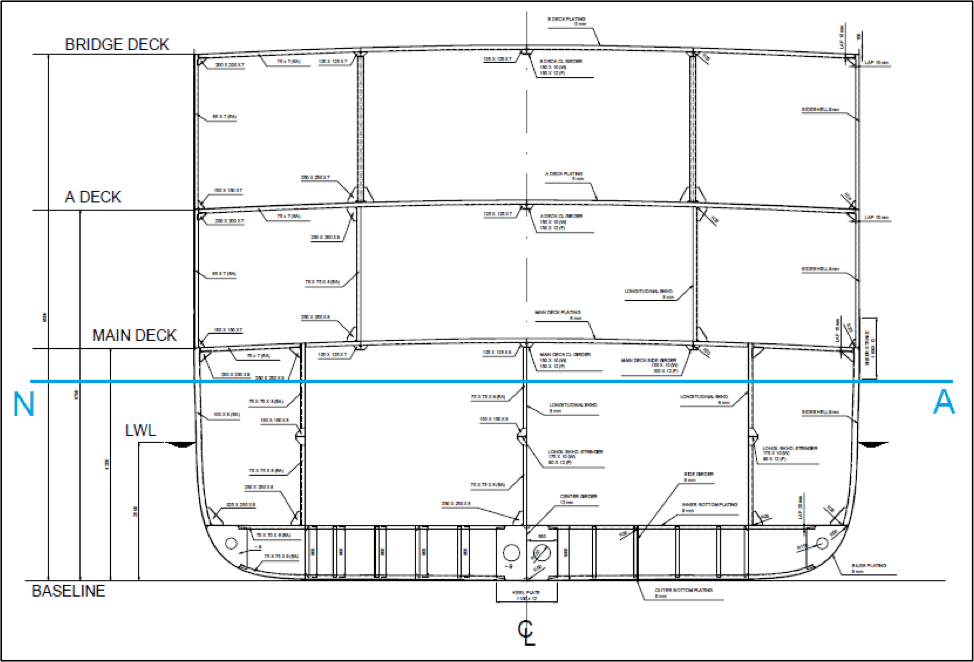 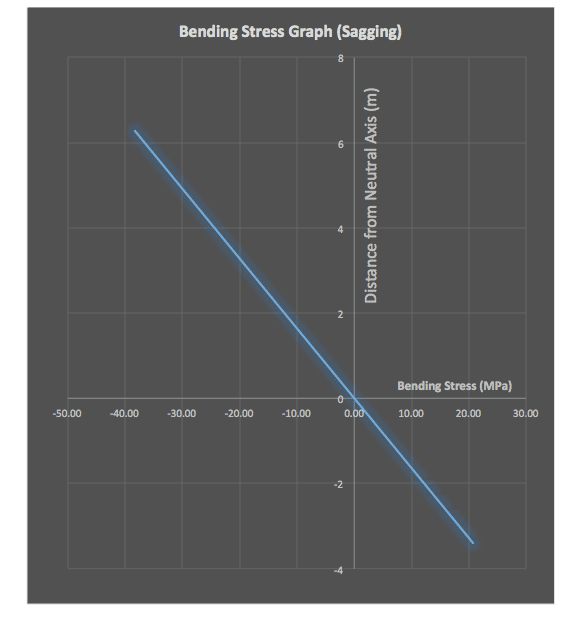 Step 5: Calculation of Steel Weight: The obtained scantlings are the used to calculate the steel weight of the ship. This is where the iteration begins. If the calculated steel weight lies outside the empirically and statistically obtained values, the designer might have to look at using lighter weight steel at suitable regions or take other decisions to keep the lightship weight within limits.

Step 6: Development of 3D Structural Model and FEA Analyses: With the structural drawings at each frame, a three dimensional structural model is prepared for the entire hull. This process takes the longest time because the accuracy of this model would directly impact the results of the finite element analyses that are to follow. Three-dimensional meshing is carried out on the 3D model, followed by finite element analyses for various conditions. It is based on the results of these analyses that classification societies today approve a ship’s structural design, as they produce more reliable data than those produced by linear calculations.

Course Stability of the Hull 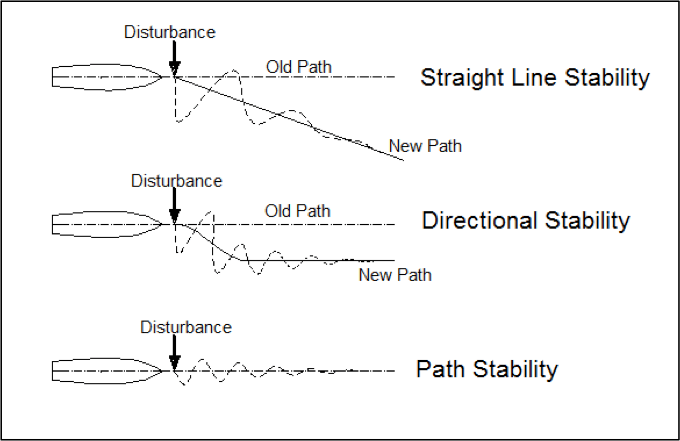 The design goal during the development of a ship’s hull, is, therefore, to attain straight line stability. For this various tank, tests are carried out at model basins and the hydrodynamic coefficients are measured for the bare hull. These hydrodynamic coefficients are the characteristic properties of the hull’s course keeping abilities, and in case of unwanted results, changes in the hull’s shape or geometry are decided upon. For example, a skeg is often added to the hull in later stages of design to improve on its straight line stability, after the model basin test results are obtained.

Other Aspects of a Ship’s Hull Design

There are other aspects of a ship’s hull that play a major role in the performance of the ship at sea. Calculation of bare hull resistance is an important step in determining the energy efficiency of the hull. Methods to calculate the bare hull resistance have been discussed in detail in this article.