What are Container Ships?

As the name suggests, a vessel structured specifically to hold huge quantities of cargo compacted in different types of containers is referred to as a container vessel (ship). The process of sending cargo in special containers is known as containerization.

One of the most potent methods of hauling goods is done by Container Ships. These ships have made it feasible to transfer towering quantities of cargo at a time and have changed the global trade efficaciously.

Container ships are the cargo ships which carry most seagoing non-bulk cargoes. In today’s world, container vessels carry around 90% of the world’s non-bulk cargoes. One of the main ways of carrying ready goods worldwide is through Container Vessels. These containers are of a standardised size so that they can be easily transferred to various modes of transport. Anything can be carried on a Containership.

The container carrying capacity of container ships today has increased more than 1200% as compared to 1968. They have become more technologically advanced and fuel-efficient by the time.

The initiation of the container shipping forms one of the most remarkable developments in the maritime cargo industry. Container ships, a type of cargo ship, have revolutionised the manner in which cargo supplies are ferried and transported across the world, by providing assurance of safety and security of the thus transported cargo supplies. Some of the biggest shipping companies today deal mainly with the containerized form of cargo.

The very first models of container ships were launched in the early 1950s and were mainly designed to ferry goods trains’ freight cars. Using crane systems and ramp systems, these freight cars could be loaded and unloaded from the vessels.

Over the years technological advancement has made it possible for comparatively far more feasible methodologies, though crane systems still play a major role in the loading and unloading operations of the containers to and from the vessels’ holds. Specialized lashing and cargo handling systems are used to secure the containers in their places.

Related Read: What is an Intermodal Container?

Container vessels are typical in that that they are constructed to accommodate immense possible cargo loads. The load holding capacitance of container vessels is measured in terms of Twenty-foot Equivalent Units or TEUs, with the biggest container ships carrying as much as over 15,000 -16,000 TEUs.

Because of such high capacities, some of the largest ships in the world are container ships.

Container vessels can be classified in many  ways:

Containers vessel have been through various phases. These phases have been classified as generations.

Lift-on/Load-off vessels are the Geared container vessel, which can load and discharge the cargoes itself using the ship’s own crane.

They have the capability to operate without port cranes and can do the cargo operations unassisted.

ROCONs are ro-ro vessels which also carry containers. The arrangements are such that the containers may be loaded on the deck or there is separate hold specifically for loading containers.

Related Read: What are Ro-Ro Ships?

Some of the main types of container ships based on size are:

The design of the concomitant container vessel is decisive. The hull is akin to the conventional Bulk Carriers and General cargo ships which are built around a firm keel. The lower part of the vessel has a significant effect on the construction of the vessel. There are lower decks, Engine room and plentiful of ballast and Fuel Tanks. The Cargo holds are the places where the underdeck Containers are loaded.

These geared container vessels use them for self-loading and discharging at ports where the cargo volume is low. There are also some specialized systems for securing the containers onboard.

In most of the container vessels, lift away type of Hatch covers are used. Hatch covers not only increase the carrying capacity of the vessels but also prevents the water ingress inside the hold & fissure, the containers under-deck and on deck both. These hatch covers have cleats which must be closed after every cargo operation & before vessel’s departure from any port.

Also, within a container ship, there are well-demarcated holds that separate each container from each other which simplifies the entirety of the filing of the containers.

Container shipping vessels represent a majority in terms of the packaged cargo ferried across the world. On account of the relevance and the ever-increasing demand for better maritime cargo transportation channels, there has been seen huge strides in the container ships’ domain. Such advancements are expected to grow even more in the days to come.

Types Of Containers By Design

Major Shipping Companies Around The World

World commerce thickly depends on the Shipping Industry. The container vessel’s carry most of the non-bulk cargoes by sea.

Below is the list of the top shipping company based on the total number of vessels in their fleet. 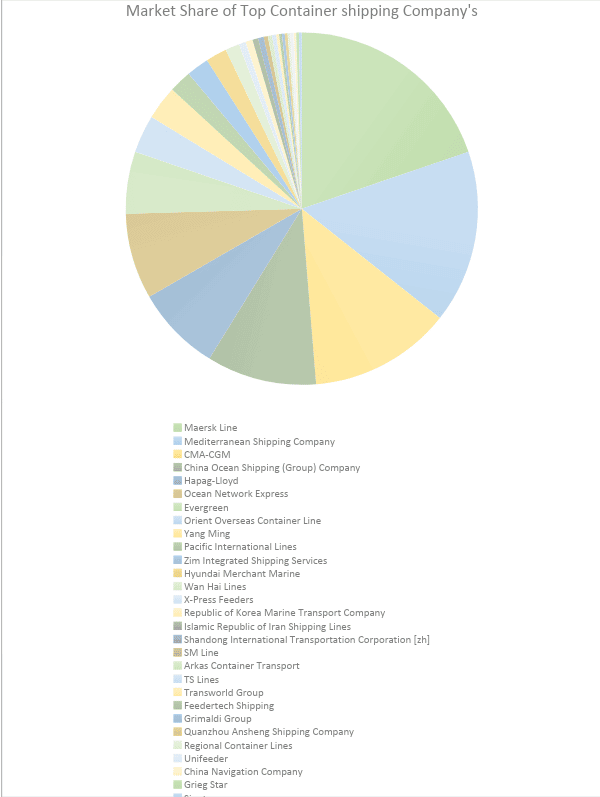 Below are the statistics of the world’s container shipping company’s market share according to the United Nations Conference on Trade and Development as of 1 June 2018. The Market share is calculated by The total Twenty Equivalent Unit capacity of the fleet of each company. 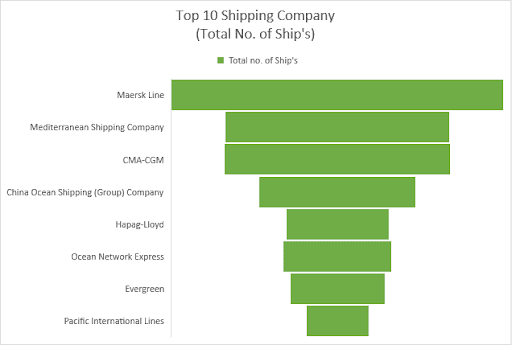 Container vessels represent a majority in terms of the packaged cargo ferried across the world. On account of the relevance and the ever-increasing demand for better maritime cargo transportation channels, there has been seen huge strides in the container ships’ domain. Such advancements are expected to grow even more in the days to come.

In the coming days, container ships have a lot more challenges to face, but Container shipping industry will always stand strong. Upcoming changes in rules/regulations, increasingly stringent environmental laws, competitive market, Introduction of new technologies, Increase in marine traffic in relation to increase carrying capacity of the vessels will be its preeminent problems.

Bhuvan Jha is a second officer sailing with Seaspan Ship Management. A new columnist, he loves photography and sailing. Bhuvan also holds a degree in MBA from Middlesex University, London and has a great inclination towards writing.