Think of the most beautiful ship you might have ever seen, imagined, or let’s say the one which happened to capture your imagination the most.

It goes to say without mention that one feature of ships which never ceases to fascinate is – The Bow.

The foremost part of the ship is part aesthetics and part science. Your ship travels in a medium that provides considerable drag as compared to air.

Fortunately, these can be controlled by how the water and waves interact with the ship at entry at the fore-end. The ship bow is where the fore part of the ship first comes in contact with the water as far as your design waterline is considered.

Looking at the different Ship Bow Designs in existence today, it seems that most of the shapes possible and a combination of two or more of them have been tried out.

However, newer designs have emerged and older lesser-used designs have often been tried out with certain changes after extensive analysis.

Still, broadly speaking, some of the bow design types are:

The Plumb, the Clipper and the Spoon

A normal bow, as what we would call it, has developed from its predecessor which was a vertical bow. The angle at which the ship stem makes with the waterline is called the rake.

A vertical, or unraked bow having a straight edge is known as a plumb bow. These bows have maximum waterline besides an X-Bow or an Inverted Bow. This length of the waterline allows for a greater hull speed.

Bow rakes are used in conjunction with flares (Remember I mentioned imagining your ship? I guess you won’t forget the outward stretching hull form at the top, this is what we call flaring).

Flaring has its own benefits like keeping water off the decks and also eases the pitching motions. Some raking also sets up what is called ‘Crumple Zones’ allowing safety against collisions before the submerged portion comes in contact with it.

Stability-wise, it raises the Centre of Buoyancy, which in turn increases the GM – one of the pillars of ship stability. Traditionally these have been called the Clippers.

As the name suggests, a Spoon Bow resembles a spoon by giving a concave appearance at the stem and deck line.

These forms often have chining and curvature at the waterline creating their characteristic wake pattern, bringing Wave Making Resistance into the picture.

A very familiar unit in bow sections of almost all seagoing cargo ships and vessels with fuller forms is –The Bulbous Bow.

This staple of ship designs today was said to have been discovered rather than being invented. Military towing tests in the USA showed that for a boat model having a torpedo discharge pipe extending forward also lowered the resistance. The first civil ships were seen in the 1930s. 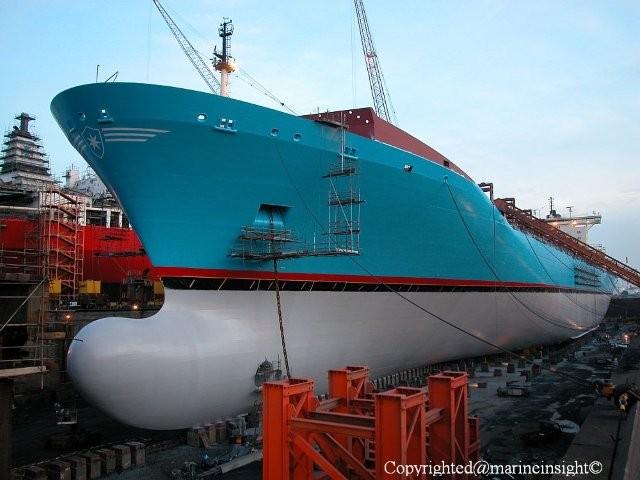 Bulbous Bows are studied using their own form characteristics and these might spring up in your ship resistance and powering calculations so you might want to consider some of them like the shape of the section, area ratios, length of the projection and the like.

The Bulbous Bow can reduce slamming on your ship and have the same effect as a normal bow in a ballasted condition if a sharply tapering bulb section is used.

Depending upon your ship form as mentioned above, the Bulb axis is also important as it affects your wave influence at entry, and if you keep your axis such that it slopes downwards stern, it will allow better flow characteristics.

Ships with fuller forms have high wave breaking resistance, and this element that eats away your propulsive efficiency can be greatly reduced by using a Bulbous Bow with a sharply downward tapering water-plane.

These Bows also allow better recovery of energy by the propeller as energy losses due to vortices at the fore-end is minimised.

Sometimes designers consider designing vessels with ‘blunt’ stems as opposed to the sharp nature of the bow section. Here is the Parabolic Bow, which resembles the mathematical curve, the Parabola.

Now, recall some high school math, the semi-minor axis of the ellipse is what would be the beam of the ship.

Sometimes only designing a parabolic shape for a ship hull is not enough, you have to see the flow around the hull and for this, give it a typical rounded form like a normal round bilged hull.

Parabolic Bows may be combined with Bulbs to take the Wave Breaking Resistance into account as these are popular in fuller form designs and are being used in Bulk Carriers today.

The closest cousin to these is the cylindrical ship bows which are also designed for fuller forms at design waterlines and are ideal for use in fully loaded conditions.

The Cylindrical Bows can have minimal Wave Making Resistance if designed with proper attention to the bluntness of form and stem edge at different drafts.

While an axe does its job, cutting wood, or maybe something as obvious, the ship bow bearing resemblance to it has its own characteristic features.

This design usually has a vertical stem line coupled with a long, deep and narrow fore portion of the hull, somewhat like an axe.

This shape allows it to cut through the water, allowing it to pass easily through waves with less pitching as opposed to a normal bow.

The lower portion of the fore-end of the hull, called the forefoot rarely emerges out of the water and hence the vessel is less susceptible to slamming also.

On the other side, certain manoeuvring aspects need to be taken to account, a vessel with an Axe Bow requires more rudder motion as is confirmed by the study of its hydrodynamic parameters.

X-Bow: The Generation of Inverted Bows

How about a design where your ship’s bow and almost a greater part of the hull appears upside down in comparison to a normal round bilge hull or any of the hull shapes you generally see on ships? The inverted bow is a success story among the revival of technologies that became obsolete in a different era.

These hull forms have the advantage of allowing maximum length waterline for ships of comparable sizes which means the highest possible hull speeds.

Like the Axe Bow, these bows have less spray of water at entry and also have less pitching motions and slamming reduction is quite significant. This creates quite a comfortable experience for the crew.

The fuel consumption is also reduced by a significant factor and this bow can operate quite efficiently in medium-sized wave ranges mainly because of the larger part of the ship volume being above and upfront, directly impacted upon by the waves.

These hull forms also double up as decks with accommodation space for the personnel. However, the applicability of these designs for the same level of improvement in speed losses in the roughest of seas must be an area of ongoing work.

Keeping that aside, these vessels have been applied to various applications like the AHTS (Anchor Handling Tug Supply) vessels, Seismic Vessels, Offshore and Pipelay Vessels, drillships and the likes.

These are the most commonly used ship Bow Designs today. Most probably, any vessel you see out there will have any one of the designs you just read about.

Do you know some more salient features of the different Bow Designs in practice today?

Let us know more in the comments below.