The hull is the most exposed part of a ship to the water. It’s generally waterproof in most cases and dictates the various components in ship’s motion. Some of these components are displacement, resistance, speed, stability (intact and also during flooding), cargo on board, seakeeping, manoeuvrability etc.

Also, the hulls depending on whether they are single in number (monohulls) or more (multihulls) determine the turning area. The purpose of operation of the ship often determines the hull dimensions, shape and form which also influence the cargo, accommodation, machinery arrangement. Aesthetic value is an important consideration in vessels such as yachts, recreational vessel, certain cruise liners and the like, where naval architects need to grab the attention of your client and prospective customer base while keeping the safety and comfort in view.

So, in order to optimise at a very early stage, one needs to start with the hull shape. Nowadays, shape optimisation is becoming quite popular in many areas concerning academic research and often this experience comes handy along with the recent advances in computational and simulation methods. Imagine if you could control certain quantities such as drag, wave making resistance in early stages of the design process, you would save a lot of money from reduction in fuel consumption and carbon footprints.

In this article, we shall speak about the various hull forms of ships in existence today, and how a Naval Architect settles for one among these in his design.

Vessel hulls are broadly classified as being  – hard-chined or smooth shaped ones.

The basic difference between them lies in the construction methodology which shows abrupt discontinuity along the bottom. The chining mentioned here may be ‘soft’ or ‘hard’ based on their roundedness and angle of meeting of these distinct planes. Most high speed vessels, especially motorboats, are of hard chine construction.

Other popular hulls in use today are the round bilge hulls which are used in both mono and multi-hull configuration.

Speaking in terms of the type of lift used, hulls may be classified as displacement, semi-displacement and planing hulls. 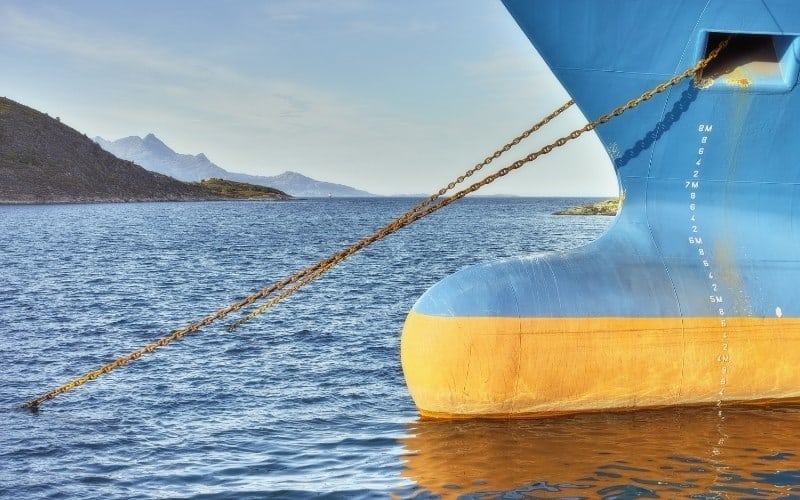 When a ship is lowered into water, some of the water is displaced to accommodate for the ship. If you somehow managed to weigh the water that was displaced, you would find it equals the weight of the ship we are talking about. That weight is the ship’s displacement-Archimedes Principle as we all know. This is the common feature of many ships forming literally the backbone of our economy today. Displacement hulls are seen in ships, which move through water by ‘cutting’ through the water with very little propulsion.  Still these displacement hulls limit the ship to lower speeds. The maximum displacement speeds are determined roughly as a function of length of the waterline. These are familiar to us as speed-length ratios. To put simply-the length of a vessel puts a ceiling on its speed.

The round-bottomed shape are examples of displacement hulls seen in many ships. A regular feature of many large cruise ships and sea boats, these hulls are a reason behind their smooth and comfortable ride-who doesn’t want one?

Some displacement hulls are capable attaining higher speeds than would be by pure displacement. These ships use both the buoyant force (also called hydrostatic lift) and the younger cousin in vogue- the hydrodynamic lift. Named either Semi Displacement/Semi Planing based on whether this predominant force is hydrostatic or hydrodynamic in nature respectively. Semi displacement hulls give comfortable ride in rough seas at moderate speeds. An excellent thing about these hulls are their sea-keeping properties and the ability to go beyond the ceiling put by speed length ratios-which you might want to consider from commercial point of view.

Semi Displacement/Semi Planing hull forms are used extensively in trawlers and yachts. These hulls offer superior mileage, have great range of positive stability and highest level of survivability in extremely rough sea conditions. You simply gain from the benefits of both worlds.

Planing hulls in ships are able to lift the ship by increasing the hydrodynamic component of lift which means at lower velocities, they work like ordinary displacement ships and gradually start ‘ploughing water’ with build-up of speed and power- a common mode of operation.

Ships with planing hulls ‘skim’ along the water surface at high speed, apparently riding on the water surface, often slamming (as is the case with very high speed vessels). To be honest, this thing called slamming is not pleasant and so the option of using planing hulls in all kinds of water (calm or rough) is out of question for now. The flat-bottomed and V-shaped hulls are examples of planing hulls. They are used in some small vessels like the recreational ones. Although intended to run in planing mode, as a designer you must also take care that this vessel is able to run efficiently in displacement mode.

Certain hull forms are adopted in a certain ship type because they offer individual benefits. Taking the example of bulk carriers which have to carry more cargo and hence are expected to have a high block co-efficient (CB), while keeping the speed on the lower side (12-16 knots). A special case is that of the lighter barges having CB around 0.90 speeds around for 5-10 knots. As the ships begin to have a more slender form (less CB), they begin to have pressure differentials along the curvature which cause flow separation and generates eddies that contribute to eddy-making resistance (one word-‘turbulence’ is your enemy). This is generally avoided in low speed ships. Vessels having larger speeds will have lesser values of CB and CP. You should keep in mind that after a certain point of time, increase in ship propulsion power there is not much resulting increase in ship speed, as the extra energy supplied will be converted into wave energy. 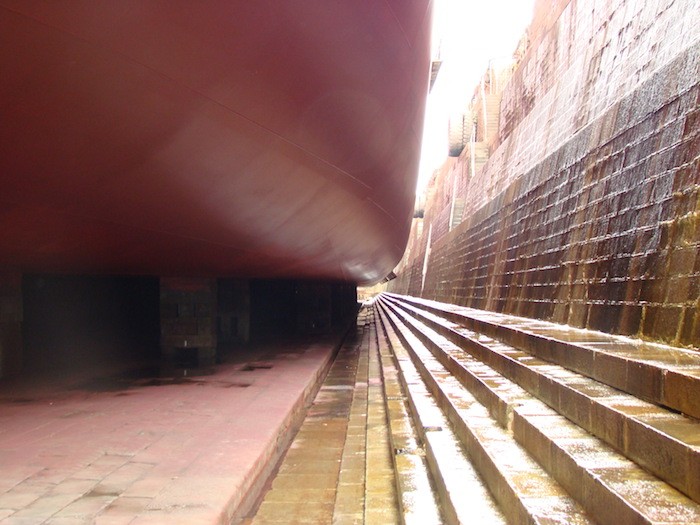 Another factor is the Wave breaking resistance which increases with the increase in block co-efficient. A blunt shape in the fore part of a ship would create a larger angle of entrance for the incoming waves resulting in larger steepness, it would be as if waves start to break (much like at a beach).

Similarly the length of hull will be more or less based on cargo (either human or material) along with draft and beam which will affect both wave-making resistance at high speeds (increase with length), draft which influences the scantlings. The beam is also of consideration in certain ships passing through canals. (We know about restrictions in the Panamax and Suezmax ships)

Selection of a hull type

Container ships are typically loaded or unloaded every 3 minutes. They are sometimes so time bound that they may come in on morning tide and sail out on the next tide, in other words, the time and money being major factors determine the speed and hence, the hull forms for a vessel are selected accordingly. At the same time an icebreaker requires a strengthened hull with a suitable shape which is both ice-clearing and ice-directing (you know what I mean) i.e. it is shaped so that the broken ice is directed around and under the vessel. 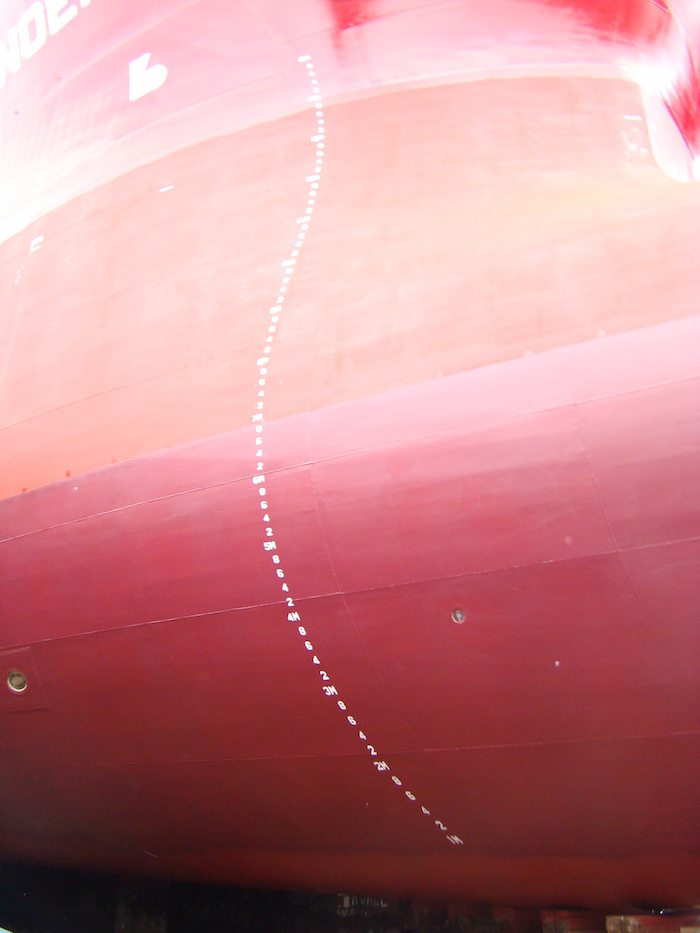 Multihulls being another option have good stability because of the very wide beam, while flat bottom hulls have less draft which is good for hunting or fishing, at the same time they are an uncomfortable ride in some ‘not so calm water’ with small rough waves; however, they may be preferred in something as ordinary as a scow barge or as exotic as a Venetian gondola.

Also the popular round bottom hulls may move smoothly through water but they may roll occasionally without the presence of a deep keel or roll stabilizing mechanisms. The deep V-Hulls are suited to higher power planing vessels. Sometimes designers use hull appendages like rudders, trim tabs or even a bulbous bow.

In order to optimise the vessel to a level based on primary and secondary requirements, a naval architect while making the designs decides the ship’s hull form before anything, keeping in view the cargo capacity, vessel speed, passenger comfort, machinery arrangements, etc.

What according to you is the most important thing to consider while choosing a ship’s hull form?