If we try to define Load Line in the simplest fashion, it will be as follows:

“Load line is a special marking positioned amidships which depicts the draft of the vessel and the maximum permitted limit in distinct types of waters to which the ship can be loaded.”

As a result of the numerous maritime accidents that have happened at sea due to the overloading of vessels, the significance of having a standard maximum limit for ships was identified long before. However, it took many years from then to have an International agreement for the universal application of Load lines.

It was in 1930, when the first International Load Line Convention took place, after which, it was periodically amended until the latest one that happened in 2003. 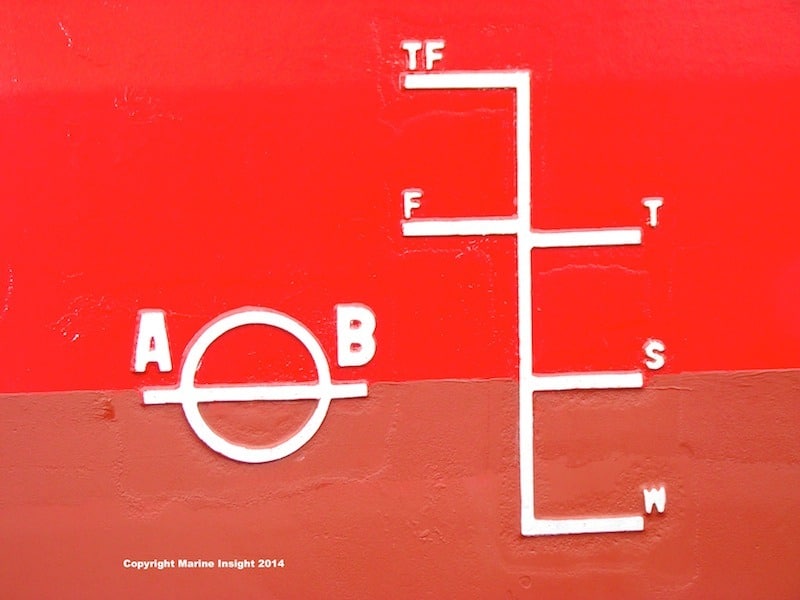 In order to make a complete comprehension of Load Lines, we must address the following questions:-

Purpose and Necessity of Load Lines

The fundamental purpose of a Load Line is to allow a maximum legal limit upto which a ship can be loaded by cargo. By prescribing such limits, the risk of having the vessel sailing with inadequate freeboard and buoyancy can be limited. A vessel should be having sufficient freeboard at all times, any exceptions made will result in insufficient stability and excessive stress on the ship’s hull. This is where load-lines play an important role, as it makes the task of detecting whether the vessel is overloaded and its freeboard tremendously easy and effortless.

However, since the buoyancy and immersion of the vessel largely depend on the type of water and its density, it is not practical to define a standard freeboard limit for the ship at all times. For this reason, the load line convention has put regulations that divide the world into different geographical zones each having a different prescribed load line.

For example, A vessel sailing in Winter on North Atlantic Ocean will have a greater freeboard than on a voyage in Tropical Zones and Freshwaters.

As we have already defined above, the Load Line is a special marking positioned amidships. All vessels of 24 meters and more are required to have this Load line marking at the centre position of the length of the summer load waterline.

There are two types of Load line markings:-

These marks shall be punched on the surface of the hull, making it visible even if the ship side paint fades out. The marks shall again be painted with white or yellow colour on a dark background/black on a light background. The complete Load line markings consist of 3 vital parts.

S – Summer:- It is the basic freeboard line at the same level as the Plimsoll Line. Other load lines are marked based on this Summer freeboard line.

T – Tropical:- It is 1/48th of the summer draft marked above the Summer load line.

W – Winter:- It is 1/48th of the summer draft marked below the Summer load line.

WNA – Winter North Atlantic:- It is marked 50mm below the Winter load line. It applies to voyages in North Atlantic ( above 36 degrees of latitude) during the winter months.

F – Fresh Water:- It is the summer freshwater load line. The distance between S and F is the Fresh Water Allowance (FWA).

TF – Tropical Fresh Water:- It is the freshwater load line in Tropical. It is marked above the T at an amount equal to FWA.

Ships engaged in the timber deck cargo trade are required to have a special set of Load lines known as the Timber Load Lines. Such vessels shall comply with the Code of Safe Practices for Ships Carrying Timber Deck Cargo in construction and other requirements obtaining greater reserve buoyancy and lesser summer freeboard. 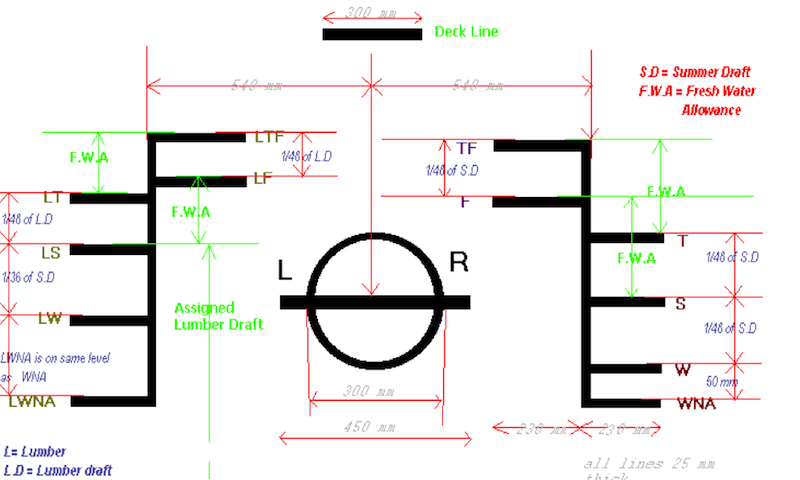 Timber cargo vessels will have a second set of Load Lines marked similar to the standard load-lines positioned 540mm above the centre loadline disc.

The letter marking of the timber loadline is different and are prefixed by ‘L’ meaning ‘Lumber’.

LS – Lumber Summer:- Its upper edge marks the summer saltwater timber loadline. It is situated at a specified level above the Plimsol line.

LW – Lumber Winter:- It is 1/36th of the lumber summer draft below LS.

LT – Lumber Tropical:- It is 1/48th of the lumber summer draft above LS.

LWNA – Lumber Winter North Atlantic:- It is at the same level as WNA.

LF – Lumber Freshwater:- It is situated above the LS by an amount equal FWA.

LTF – Lumber Tropical Fresh Water:- It is positioned above LT by an amount equal to FWA.

Every ship that has been surveyed and marked in accordance with the present Load line convention are issued by the authorized administration, an International Load Line Certificate. The certificate will have a validity of not more than 5 years and will contain all vital information that includes the assigned freeboard and freshwater allowance.

It is to be noted that, after completion of a load line survey and issuance of the certificate; no changes shall be made to the superstructure, markings, equipment or arrangements that have been covered under the survey. If such changes need to be made, the authorized authority conducting the survey shall be contacted.

If you have more points to mention on ship load-lines please go ahead, We would like to see them as comments!

10 Types of Decks Every Seafarer Should Know
What are Vessel Traffic Services?
Different Entries To Be Made In Bridge Log Book of The Ship
How to do Intentional Grounding or Beaching of a Ship?