Having discussed the basics of intact stability of surface ships, we are now at a stage to analyze the same. The easiest and handiest tool for analysing a surface ship’s stability, is by graphs or curves. In fact, a ship designer or an officer on-board should be able to know the stability characteristics of a ship just by looking at the curves. 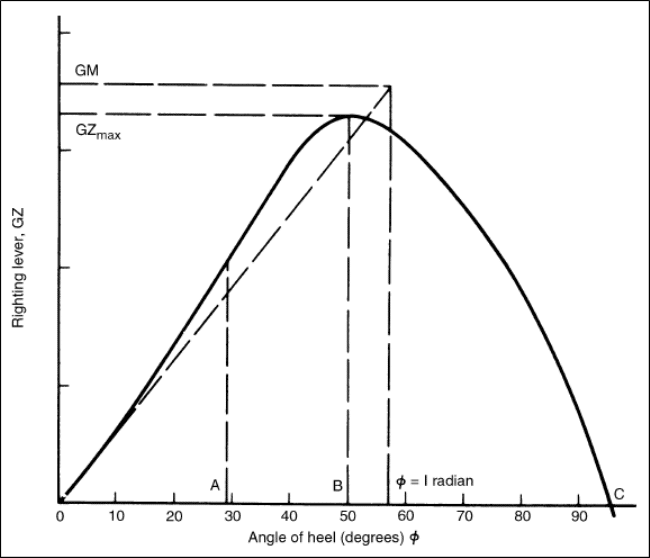 The above graph is plotted assuming that the ship is in static condition. Some of the important information that can be derived from any GZ curve of a ship are discussed below:

Point of inflection does not play an important role in operational purposes, but it helps designers to make preliminary predictions regarding what changes in stability would be brought about if the design of a hull-form is altered. 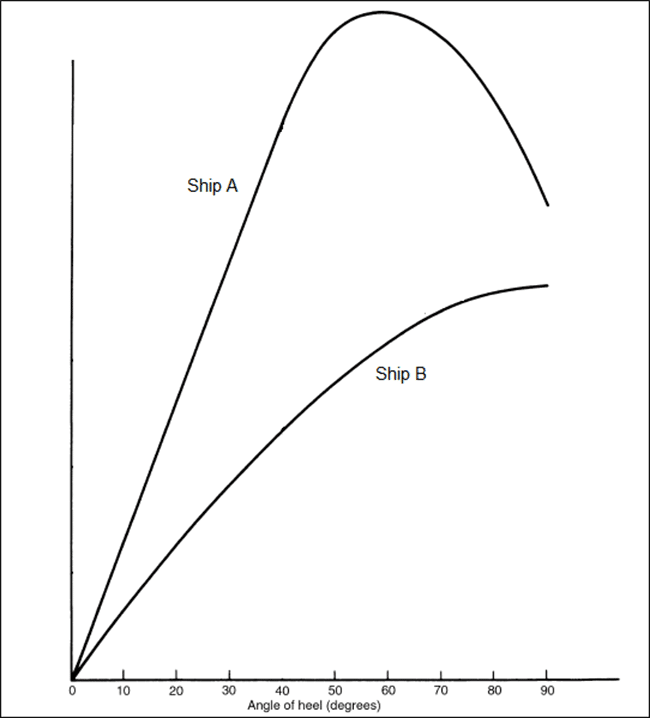 It may so occur that the initial metacentric height of the ship becomes negative. As a result of this, the ship is not stable in its upright condition, leading to a heeling moment, as shown in part (a) of Figure 3 below. 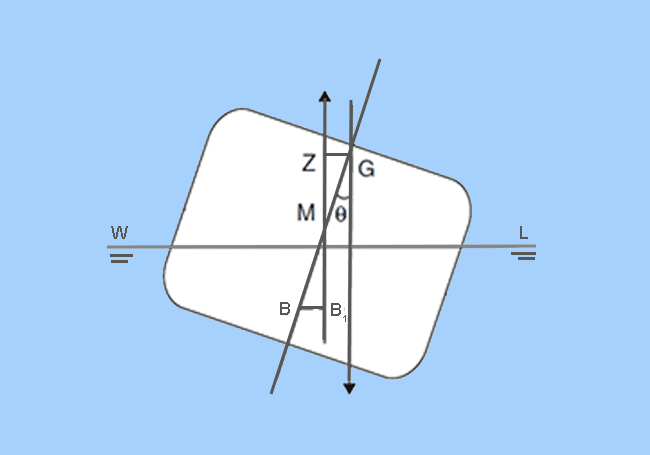 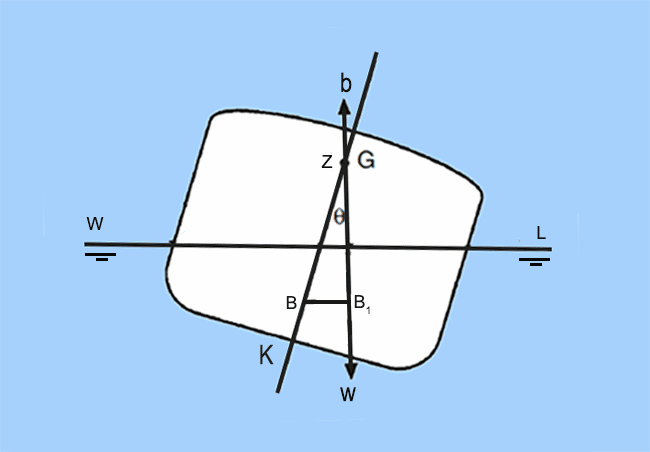 Figure 3 (b): Equilibrium at Angle of Loll 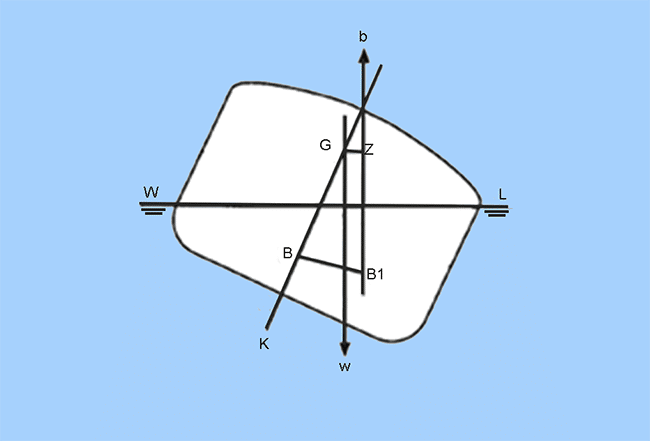 As a result of the negative righting lever (GZ), the ship heels further upto an angle where the righting moment and righting lever, both, become zero. This angle at which this condition is achieved is called Angle of Loll, as shown in part (b) of Figure 3. The important thing to visualize here is that a condition of loll can be treated as a shift of the GZ curve from the origin (shown in Figure 4 below). 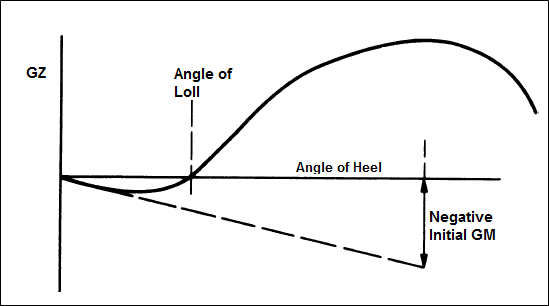 Figure 4: GZ curve for a ship having an angle of loll.

Now, when the ship heels to an angle more than that of the loll angle (part C of Figure 3), a positive righting moment is generated, which brings the ship back to its equilibrium position. However, as long as a condition of loll prevails, the equilibrium condition will not be achieved when the ship is upright. This results in a permanent angle of heel in the ship, which is an unwanted situation.

There are many reasons behind a condition of loll. One of the most commonly occurring ones is the free surface effect. We will study that, and the other causes of loll in later articles, and also see how they can be corrected. The important thing to note now, is the shape of the curve. For a designer, it is very vital to observe the initial slope of the stability curve of a ship in all loading conditions, because often, the negative slope might not be as exaggerated as shown in the above figure.

Study of Curvature of GZ Curves:

GZ curves are generated taking into consideration multiple conditions for one ship, during the design process. Though the values traced by the curve may be different in each case of loading, but the shape or curvature of the curve will hardly change, because it depends on the geometry of the hull. So, the hull designer must always study the initial curvature of the GZ curve once it has been generated for a single load case. Why and how?

Let’s consider two ships (A and B) having the same metacentric height, but different hull forms, such that the curvature of the GZ curve near the origin for Ship A is concave upward and the curvature for Ship B is concave downward as shown in figures 5 and 6 respectively. For each ship the GZ curves are plotted for: 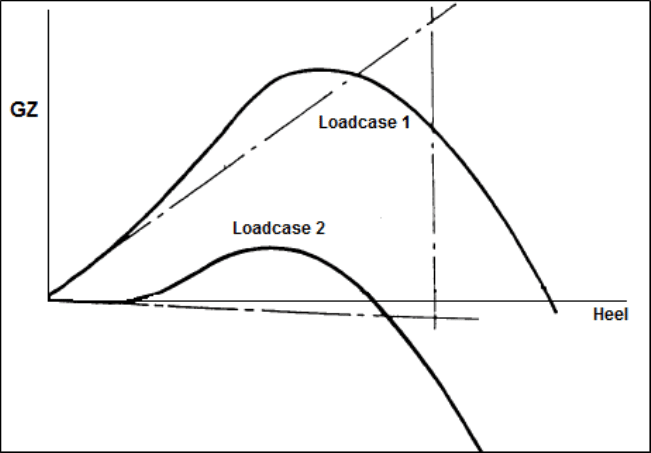 Figure 5: GZ curves of Ship A for two load cases (Concave Up) 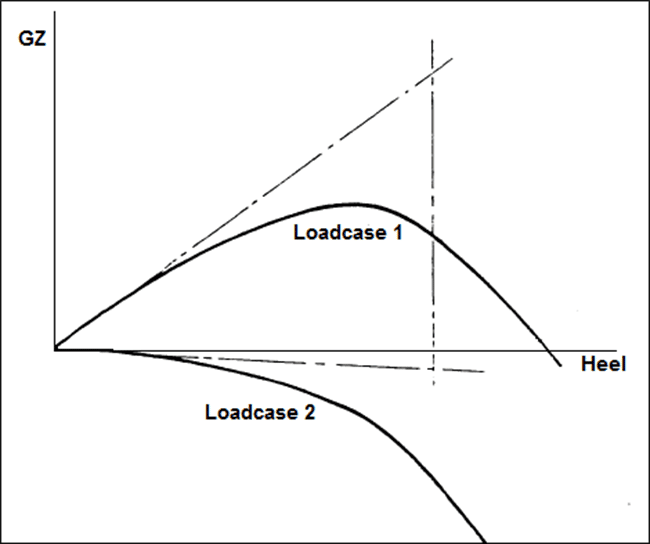 Figure 6: GZ curves of Ship B for two load cases (Concave Down)

In case of both the ships, if an identical rise in centre of gravity is considered (which brings us to Loadcase 2 from Loadcase 1), the GZ reduces due to reduction in metacentric height. But both the ships would respond very differently due to the initial curvature of their GZ curves.  In case of Ship A, even when the initial metacentric height becomes slightly negative (notice the initial slope for Loadcase 2), the ship will heel upto a certain angle, but as the ship keeps heeling, due to the convex upward curvature of the GZ curve the righting lever becomes positive again. This causes the ship to return to a condition of positive stability.

But in case the initial metacentric height of Ship B is even slightly negative, even a slight heeling moment will capsize the ship. Why? Because as the angle of heel increases (follow Loadcase 2 for Ship B), the righting lever remains negative due to the convex downward curvature of the GZ curve. When such a GZ curve is obtained during design phase, the designer must iterate the design of the hull. Probable methods of correcting the shape is by increasing the beam, or adding a flare, etc.

The vertical position of centre of gravity (G) of the ship is not always fixed. It changes with every voyage, depending on the loading conditions and the amount of ballast. The CG of the ship also changes when the ship is in transit. This varying nature of CG makes it difficult for the designer to assume the loading conditions at which GZ curves should be obtained, because different values of KG (vertical centre of gravity) would result in different metacentric heights (GM), and since righting lever (GZ) is directly related to GM, the stability curves for each of the loading condition would be different. So how do we circumvent this problem?

In order to make things easier, a few known facts were considered before developing the concept of cross curves of stability:

The cross curves of stability were developed, so that, for any loading condition (where KG is already known), values of righting lever (GZ) can be obtained for all angles of heel. 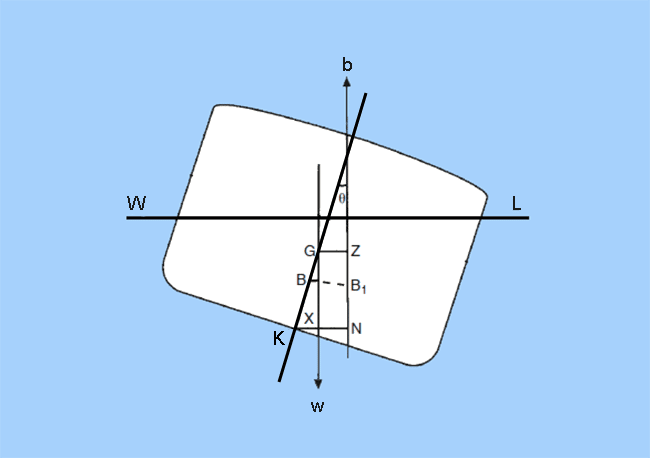 Figure 7: KN for a ship at any angle of heel.

In order to understand how, study the above figure. The point ‘K’ represents the keel of the ship. If at any angle of heel (Ɵ), a line parallel to that of GZ is drawn from ‘K’, then the point of intersection of this line with the vertical line of action of buoyancy, is represented as ‘N’.

From the above figure, the following expression can be derived for righting lever:

The only unknown in the above expression is the value of KN. So, a computer generated plot of KN values for a range of displacements is obtained for different heel angles, and the resultant curves are collective called KN Curves or Cross Curves of Stability, as shown in Figure 8 below. 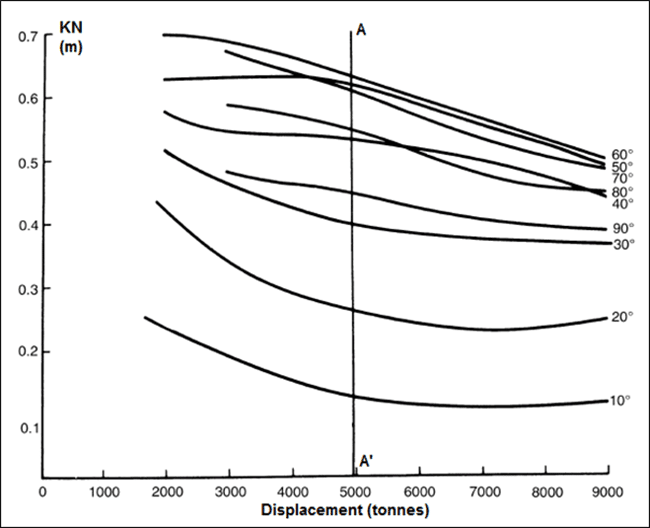 Figure 8: Cross Curves of Stability for a surface ship.

Once the KN curves are obtained, it is now possible for the designer to obtain the stability curve / GZ curve for any loading condition. How?

Thus, the KN curve enables us to obtain the stability curve at any predetermined, as well as new loading conditions. It is due to this reason, KN curves are also provided in the Stability Booklet of a ship, so that, in case the ship is operating in a loading condition it hadn’t operated in before, the GZ curve can still be obtained easily to determine the stability of the ship.

You must have found this article to be more theoretical than the previous ones on stability. The reason why we discussed this, it is the ability to play with curves of stability that will allow us to assess practical stability cases with ease. Stability curves can also get tricky a lot of times. We will raise some of those questions here, and answer them in our next article:

Types of Vibrations On Ships – Hull Girder Vibration
How Does A Rudder Help In Turning A Ship?

Superstructure Of Ships – Requirements For Design & Types Of Loads Acting
Want to share your tips and advice? Got questions? Visit the community forum to ask questions, get answers, meet people, and share your tips!