The understanding of a surface ship’s stability can be divided into two parts. First, Intact Stability. This field of study deals with the stability of a surface ship when the intactness of its hull is maintained, and no compartment or watertight tank is damaged or freely flooded by seawater.

Secondly, Damaged Stability. The study of damaged stability of a surface ship includes the identification of compartments or tanks that are subjected to damage and flooded by seawater, followed by a prediction of resulting trim and draft conditions.

The fundamental concept behind the understanding of the intact stability of a floating body is that of Equilibrium. There are three types of equilibrium conditions that can occur, for a floating ship, depending on the relation between the positions of the centre of gravity and centre of buoyancy.

Study the figure below. A stable equilibrium is achieved when the vertical position of G is lower than the position of the transverse metacentre (M). So, when the ship heels to an angle (say theta- Ɵ), the centre of buoyancy (B) now shifts to B1. The lateral distance or lever between the weight and buoyancy in this condition results in a moment that brings the ship back to its original upright position.

The moment resulting in the uprighting of the ship to its original orientation is called Righting Moment. The lever that causes the righting of a ship is the separation between the vertical lines passing through G and B1. This is called the Righting Lever, and abbreviated as GZ (refer to the figure above).

An important relation between metacentric height (GM) and righting lever (GZ) can also be obtained from the figure above.

This is the most dangerous situation possible, for any surface ship, and all precautions must be taken to avoid it. It occurs when the vertical position of CG coincides with the transverse metacentre (M). As shown in the figure below, in such a condition, no righting lever is generated at any angle of the heel.

As a result, any heeling moment would not give rise to a righting moment, and the ship would remain in the heeled position as long as neutral stability prevails. The risk here is, at a larger angle of heel in a neutrally stable shift, an unwanted weight shift due to cargo shifting might give rise to a condition of unstable equilibrium. 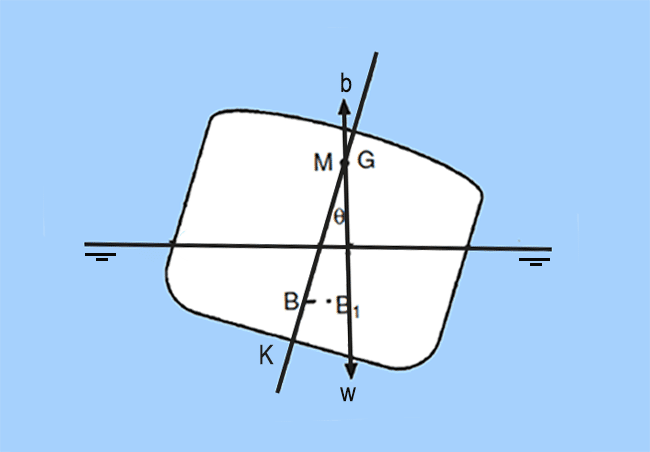 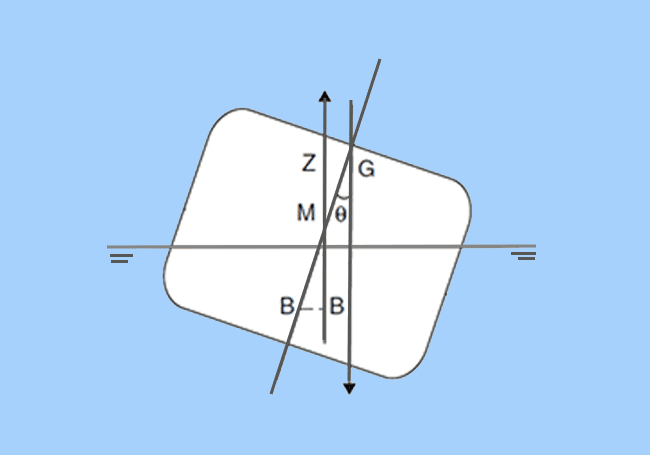 Remember discussing, in the previous article, that metacentric height is one of the most vital parameters in the study of ship stability? We are now, in a position to appreciate the same. A ship’s stability, as seen above, can be directly commented on, by the value of its metacentric height (GM).

What Makes a Ship Unstable?

Upsetting Forces On A Ship:

Analysis of static transverse stability arises from the effect of upsetting forces or heeling moments, which can be categorised into two types depending on their sources with respect to the ship:

Beam winds act on the portion of the ship above the waterline. The resistance acts as an opposing force on the underwater part of the hull. Now, there are two sets of force couples and corresponding moments generated, in this case. Note the forces acting on the ship in the following figure. 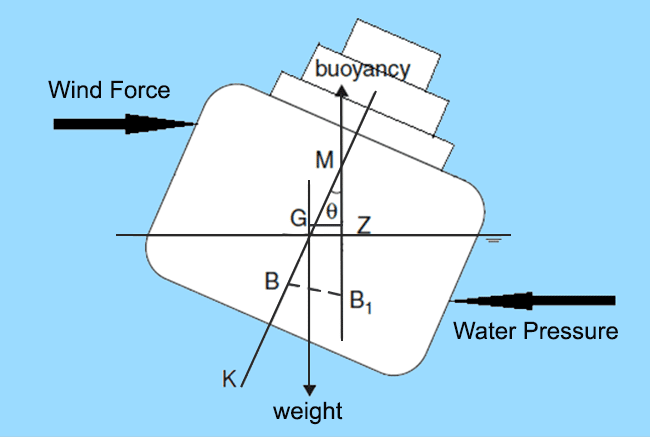 Figure 4: Heel due to beam winds.

2. Lifting of Weight by the Sides:

Weights are usually loaded or unloaded by the sides of the ship when such operations are carried out by the deck top crane. In this case, a heeling moment is caused by a shift in the centre of gravity. How?

To know further, the fundamental concept that needs to be understood is that when a weight is lifted by a crane, its weight acts on the fulcrum – that is, the end of the derrick of the crane, irrespective of the height of the weight above the ground. This also means that once a weight (suppose, a container) is lifted from the berth, the weight of the container acts through the end of the derrick (which is a fixed point with respect to the ship), irrespective of the swinging motion of the container. Now, follow the diagram below. 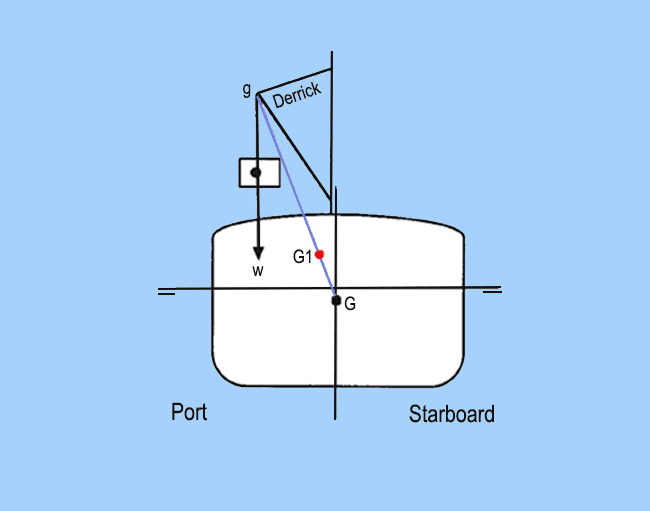 Figure 5: Shift of CG of ship during weight life by sides.

When a ship executes a turn, a centrifugal force acts horizontally on the centre of gravity of the ship, in a direction opposite to that of the turn. This force is balanced off by the hydrodynamic pressure acting on the underwater part of the hull in the opposite direction. If you follow the figure below, it is evident that the ship heels in the direction opposite to that of the turn till the righting moment generated due to weight and buoyancy couple, equalise the heeling moment generated by a couple of centrifugal force and hydrodynamic pressure. The sharper the turn, the more the centrifugal force generated, resulting in more angle of heel. 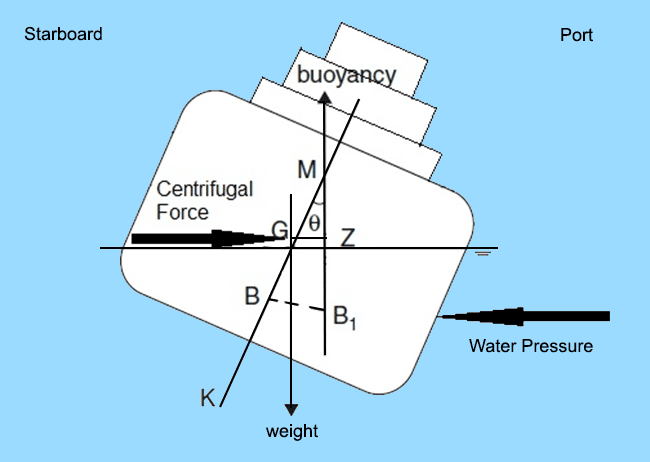 Figure 6: Ship heeling to port while executing a sharp turn to starboard.

When a ship grounds in such a way that only one side of the underwater hull is hit, the upward reaction force at the point of contact between the hull and the seabed results in heeling. Part of the energy of the forward motion of the ship is absorbed by the upward reaction force (R) also causes the ship to initially lift up to a certain extent. When the tide ebbs, the ship sits further down onto the rock, and the magnitude of the reaction force increases. In such a condition, the buoyancy reduces, because now the weight of the ship (w) is being supported by a combination of the reaction force (R) and remaining buoyancy force (w-R), as shown in the figure below. 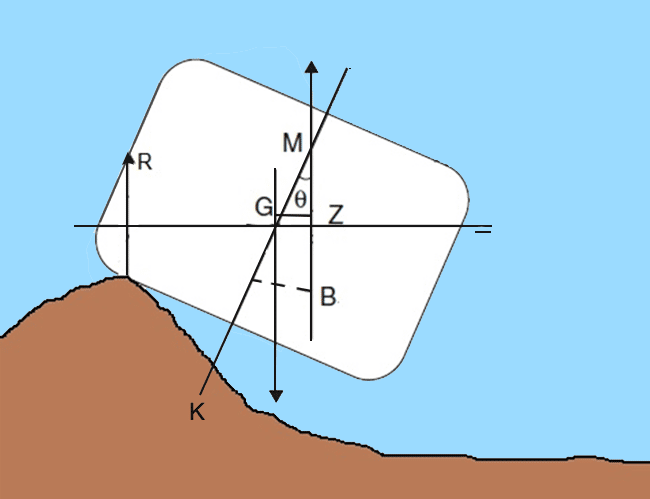 Figure 7: Heel due to grounding of a ship.

The ship will heel up to the point where the moments of the weight of the ship (w) and buoyancy (b) about the point of contact with the seabed are balanced. This is exactly what happened on MV Costa Concordia, which was grounded, and as the tide ebbed, it resulted in capsizing the ship. However, the capsizing was not a result of grounding alone. The damage in the hull caused by grounding adds to the effect, which is something we will study in damaged stability.

Do note, that someone with a thorough knowledge of these basics would be able to predict which side of the ship is grounded by just looking at the direction of the heel. It can be concluded from the above figure that if the port side of a ship’s hull hits the seabed, it would heel to starboard, which can be proved by real images of MV Concordia. Notice the direction of the heel (Starboard side) in Figure 8. When the ship was raised from the wreck area, the damage on the hull was clearly visible on the port side

Ships are moored to bollards when berthed at a port, or moored to guyed buoys while loading oil from offshore loading sites. If the mooring lines are too tensed, or in case the ship drifts away from the moored point, the increased tension on mooring lines causes the ship to heel. However, this can be easily prevented by adapting proper mooring techniques.

The previous cases studied were external phenomena resulting in heeling of a ship. There are also numerous internal causes that result in the same. Most of these can be prevented by taking proper operational measures, which we will discuss in later articles. We will now focus only on how heeling moments are caused due to internal phenomena.

Movement of any weight athwartship (in a transverse direction) will alter the position of the centre of gravity of the ship (from G to G1), as shown in the figure below. The initial lever created between weight acting through G1 and buoyancy acting through ‘B’ will create the heeling moment. The ship will heel to a point at which the new centre of buoyancy (B1) is at such a position such that weight and buoyancy act through the same line.

It is important to understand that though this is an equilibrium condition, a heeled condition is not desirable for the operation of a ship. Hence, corrective measures must be taken to bring the ship back to an upright position. We will study corrective measures in later articles. 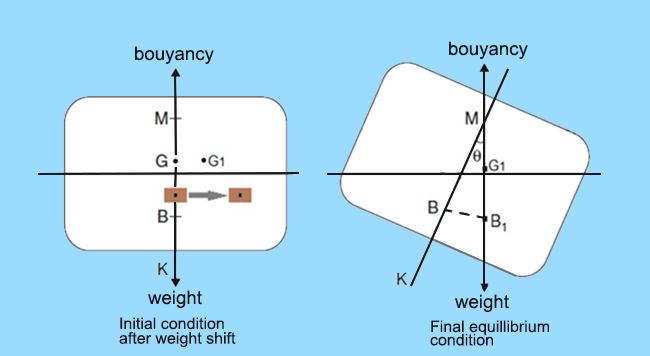 Seawater often finds access to decks (mainly the weather deck), and if trapped on deck, the motions of the ship will result in periodic weight shifts in both directions, creating cyclic heeling moments due to continuous change in CG of the ship.

In order to prevent this, access is provided from every deck leading to the bilges, where green water (term used for seawater on deck) is stored. 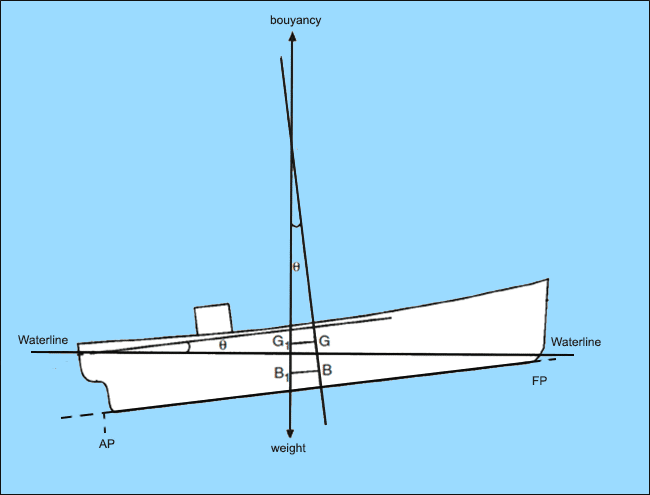 Figure 11: Trim of a ship due to longitudinal shift in centre of gravity.

Now that we have acquainted ourselves with equilibrium conditions of ships, and are able to analyse the effect of upsetting forces on ships, we will look into analysing the stability of a ship by stability curves, which provide us more window into understanding and predicting the behaviour of a ship in diverse conditions at sea.