You are here: Home › Naval Architecture › Why Do Ship’s Hull Fail At Midship Region?
TwitterFacebookLinkedInPinterestBuffer

We have had a lot of marine accidents that involved failure of the hull structures. Whether it was a crack in the midship region, or a total split-off of the hull girder, or failures due to propagation of cracks, the crux of the matter boils down to a handful of causes that are of great concern to ship designers and operators. Mostly, crack propagation takes place due to fatigue, which is not something this article is about. This article gives an insight into the causes that lead to the failure of the hull girder from a longitudinal strength point of view. And before we start, we have to ask ourselves a few questions. Why have ships split-off? Why have many hull structures split-off after grounding? Why are midships highly prone to such failures? Is it because of a design flaw? Or for that matter, a glitch in the operation standards that have not been maintained?

Marine Engineers and ship operators use loading manuals to maintain the distribution of deadweight load on the hull girder. But what if the key to the design of those manuals lies in a deeper context? What if we tried to understand the phenomenon from a ship designer’s point of view? When ships are designed, a Naval Architect takes into consideration each and every factor that might affect the structural response of the hull girder with respect to the required loading conditions. In order to see the inner picture, we need to look at it from designer’s point of view.

When the hull girder of a ship is designed, the designers analyse the structure as a beam. But this beam is different from those that are used by civil engineers, in as much as ships are structures that are subjected to unpredictably variable loads. Look at it this way- the buoyancy on the hull is never predictable given the fact that sea surface being characterised by waves, the buoyancy on the ship is always varying periodically along the ship’s length. Also, ships are not always in the same cargo loading conditions. Where they may ply one voyage in a fully loaded condition, in the return voyage the ship may not have cargo but be induced to ballast loading condition. So we design the ship structure keeping in mind the uncertainty of the loads, and what helps in quantifying the response is a theory that has been widely used- Euler’s Beam Bending Theory. 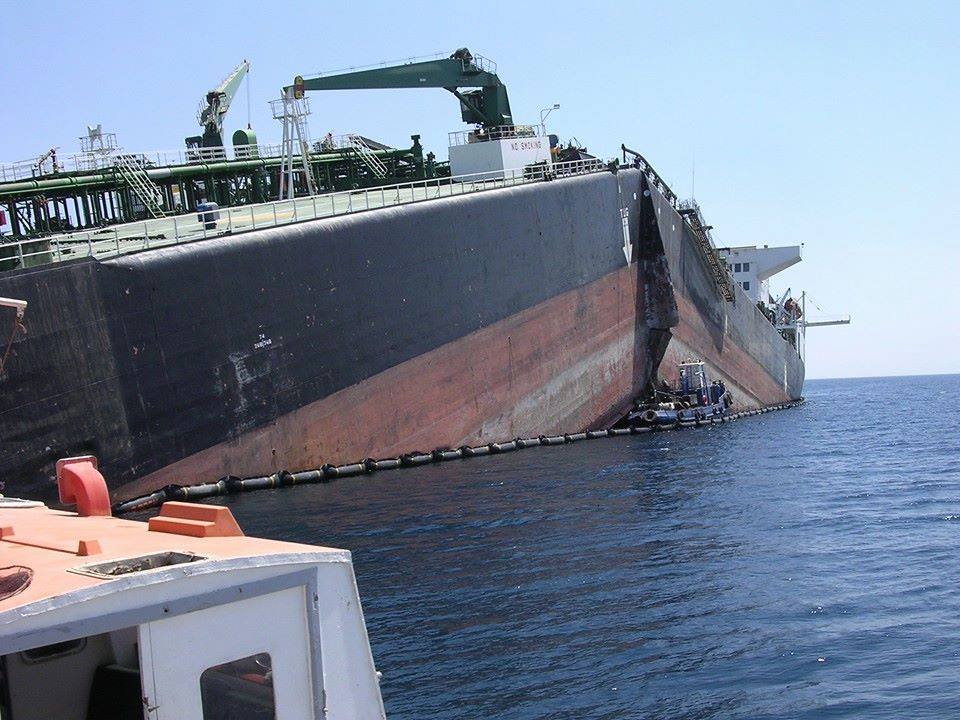 This great theory has been used by structural engineers in analysing the bending aspects of beams. Naval Architects have adopted this theory, but in a slightly different way. Unlike civil structures, a ship structure (which will be referred to as hull girder from now on) is always supported by an “elastic foundation” (sea surface). The direction of buoyancy on the girder is upwards, and its longitudinal distribution depends upon the longitudinal distribution of the ship’s underwater volume. Which means, there is more buoyancy at the midship region than the fore and aft ends. This leads us to a buoyancy distribution which looks similar to Figure 1. 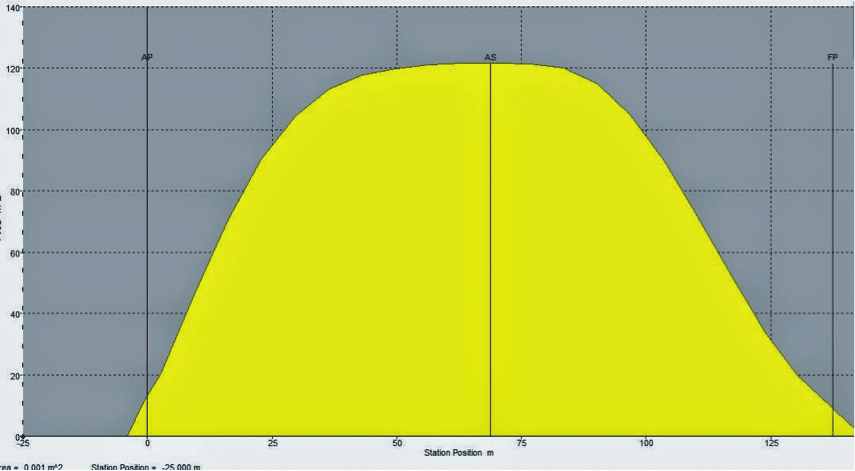 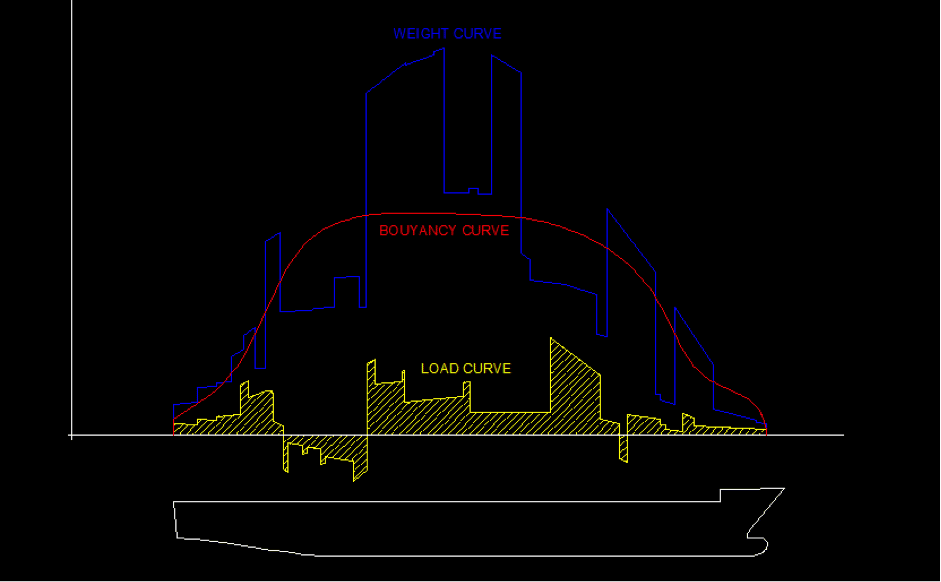 What we do next, is superimpose both the graphs and subtract the magnitudes of weight from the buoyancy at every point along the length to obtain the longitudinal distribution of total load on the girder, as shown in Figure 2. Notice how the direction of the net load may be upwards or downwards at different positions along the hull girder length, depending upon the buoyancy and weight distributions.

It is from this stage of the analysis that Euler’s Beam Bending Theory comes of great use. The theory says, if we plot the magnitude of area under the load curve from the aft end upto a certain point fore of the aft, we obtain the shear force acting on the hull section at that point. A longitudinal plot of this parameter gives us the distribution of the shear force, which is the SF Diagram of the ship at that loading condition. If such an area integration is performed on the SF curve, we obtain the Bending Moment curve of the ship for that loading condition, as shown in Figure 3. 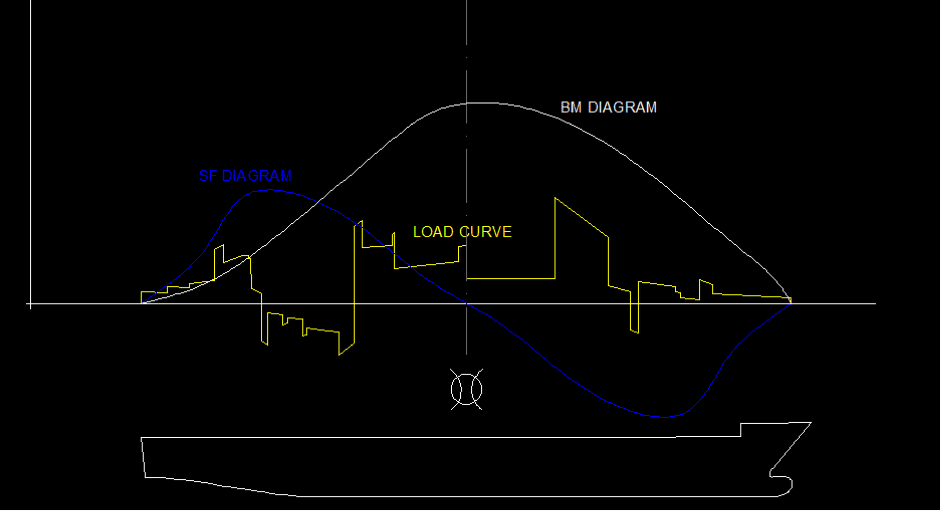 Figure 3: SF and BM Diagrams of a ship

This very diagram can answer all the questions that we asked in the beginning. The answers, along with some very important ship structural criteria as discussed below:

As mentioned earlier, the points mentioned in this article is not an exhaustive list of reasons leading to ship hull failure but enumerates causes that lead to the failure of the hull girder from a longitudinal strength point of view.

Let’s know if you have more points that should be added to this article.

If you have questions, please feel free to ask them at http://forums.marineinsight.com