You are here: Home › Naval Architecture › Importance Of Ship’s Keel and Types Of Keel
TwitterFacebookLinkedInPinterestBuffer

The keel of a ship is similar to the spinal cord of humans. As the spine functions to keep our backbone upright by linking and supporting our body, the keel is the primary structural member and backbone of the vessel which runs along the centreline of the bottom plate around which the hull of the ship is built. It is the main longitudinal component of the ship to which every other main structural item is connected directly or indirectly.

Keel is a plate which runs longitudinally from stem to stern of the ship and has slightly more thickness than the adjoining plates as the ship sits on this area in the blocks during construction as well as in dry docks.

Importance of Keel in Ship’s Operation

Under-keel clearance is calculated as follows: 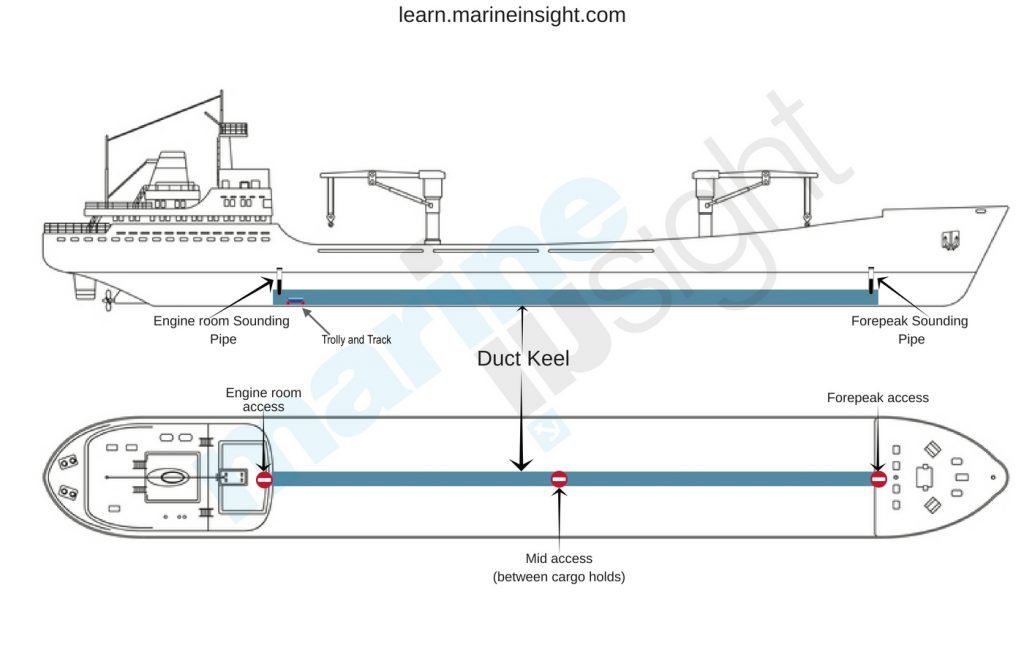 2)    Keel Laying: Laying the keel is the first part of a ship’s hull construction and the day is often marked with a ceremony known as keel laying ceremony. Keel related traditions from older times are said to bring good luck to the ship during the construction process and to the captain and crew during the vessel’s sea life.

It is attended by ship owners and shipbuilding dignitaries and is considered as a significant moment in shipbuilding process. Keel laying also has importance in many IMO conventions as it’s the date the construction of the ship starts.

According to SOLAS Chapter 5, ‘constructed’ concerning ship means a stage of construction where the keel is laid. Keel laying date is taken reference for various classification surveys, inspections, modifications, etc.

Related Read: Points To Consider While Preparing For Load Line Survey On Ships

Flat Keel is a solid plate which is supported by frames running around the vessel. It is thicker than the adjoining plates and must be of full uniform thickness for 3/5th length amidship. It may gradually reduce towards ends of the ship and is most common in a majority of ocean-going vessels.

A steel bar is placed at the centre of the keel called bar keel. It consists of a bar which is supported by frames running around the vessel. It was used primitively when shipbuilding changed from wood to steel. The bar keel is made up of a flat steel bar or a steel plate of depth and thickness built to classification society requirements. It is stronger and heavier than the flat keel. Steel plates on either side of the bar keel are known as garboard strake. 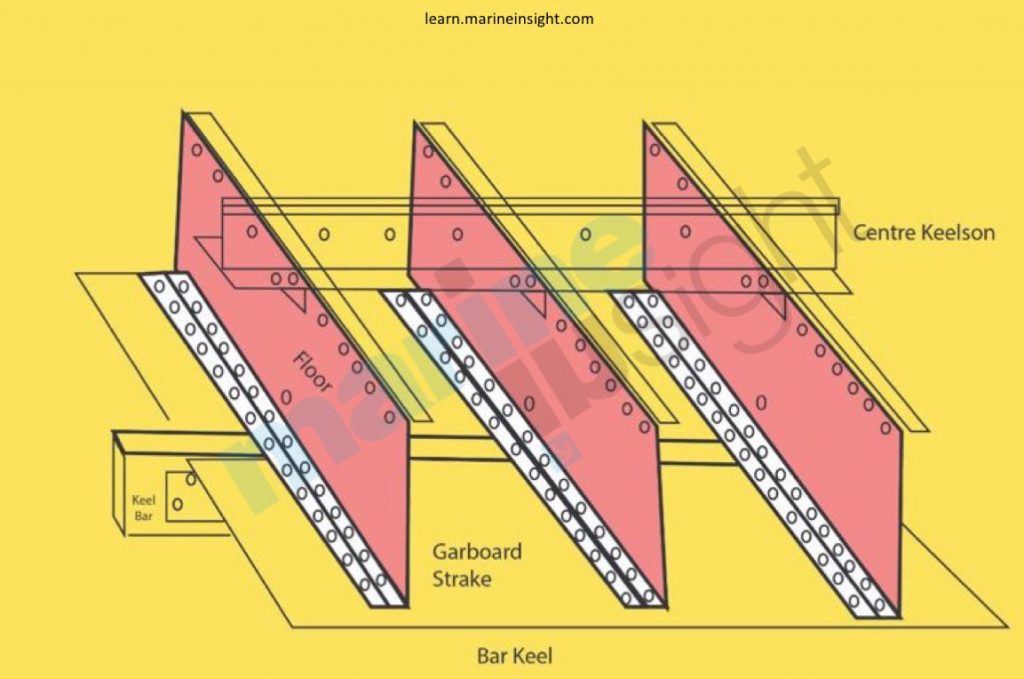 It is found mostly on single bottom hulls supported by solid floors with or without center keelson plate. It is less common on new ships and is more common on smaller vessels like ferries, tugs, and boats where grounding is more of a risk. Bar keel doesn’t provide sufficient strength for large ships as there is no direct connection between the keel and the floors. Hence flat plate keels have replaced bar keels on large vessels.

Duct keel is provided in double bottom hull ships and consists of solid plates welded into a box shape, forming an internal watertight passage running along the length of the ship, usually from collision bulkhead to forward engine room bulkhead. It is formed by two longitudinal girders which should not be less than 1.83 m apart. 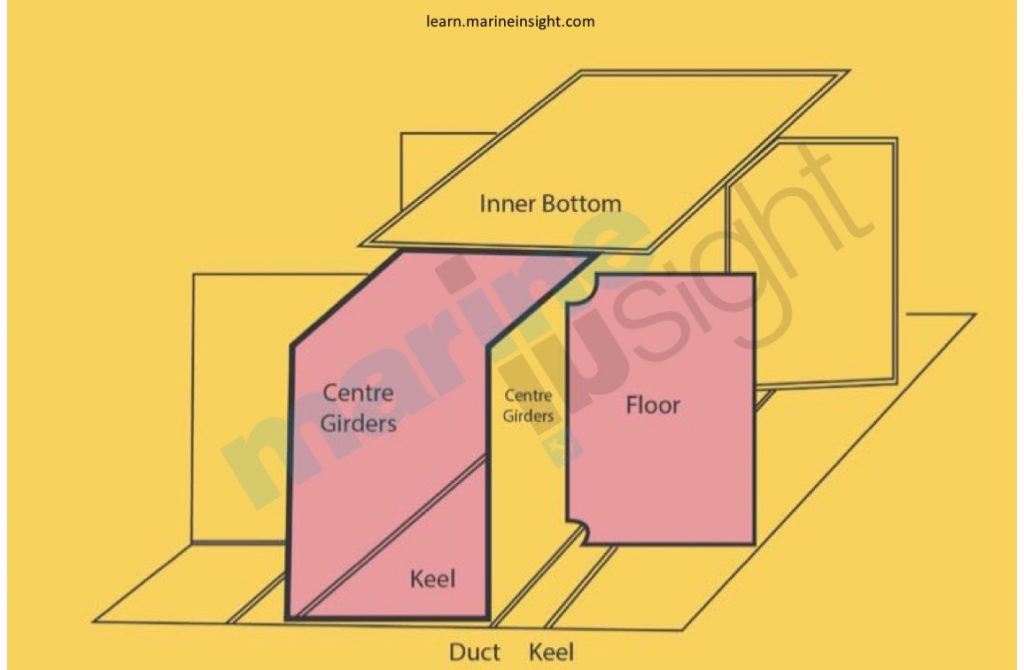 The distance must not be exceeded as girders must be supported by keel blocks when docking. Transverse stiffening bar or brackets are normally provided on the keel and inner bottom plating between the girders. 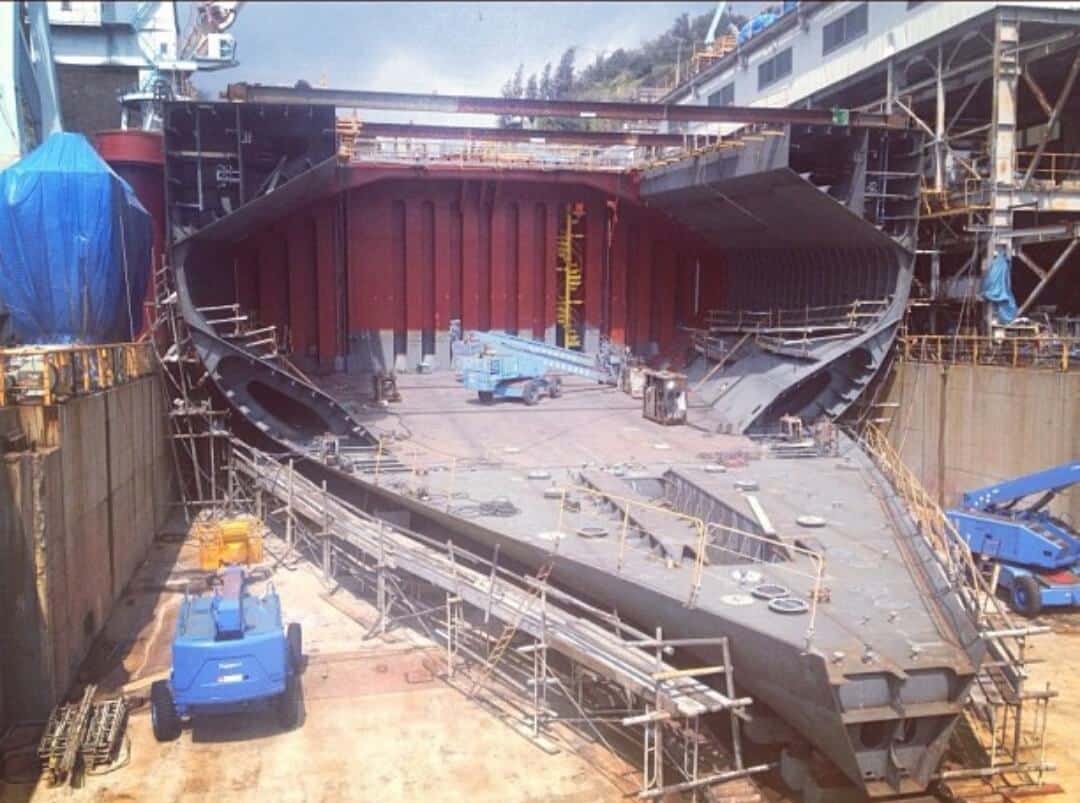 Following are the advantages of Duct keel:

1)    They are a higher strength compared to other types of the keel as they give excellent resistance to loads due to its box structure.

2)    It allows protected cables, bunker pipelines, and ballast pipelines to run fore and aft beneath the cargo spaces. This allows the pipelines to be easily inspected even when cargo is loaded.

3)    It is possible to carry oil and water pipes in the duct to prevent contamination, which could occur if the pipes passed through cargo tanks.

4)    It acts like a cofferdam and is provided with a sounding pipe to detect any leakage.

It is very important to carry out duct keel inspection on a regular basis. Duct keels have bunker and ballast pipelines running along its full length and connecting to various bunker storage tanks and ballast tanks. Any leakage from these pipelines can cause severe problems and risk the safety of the ship. Hence it is necessary to carry out periodic inspections of the duct keel. 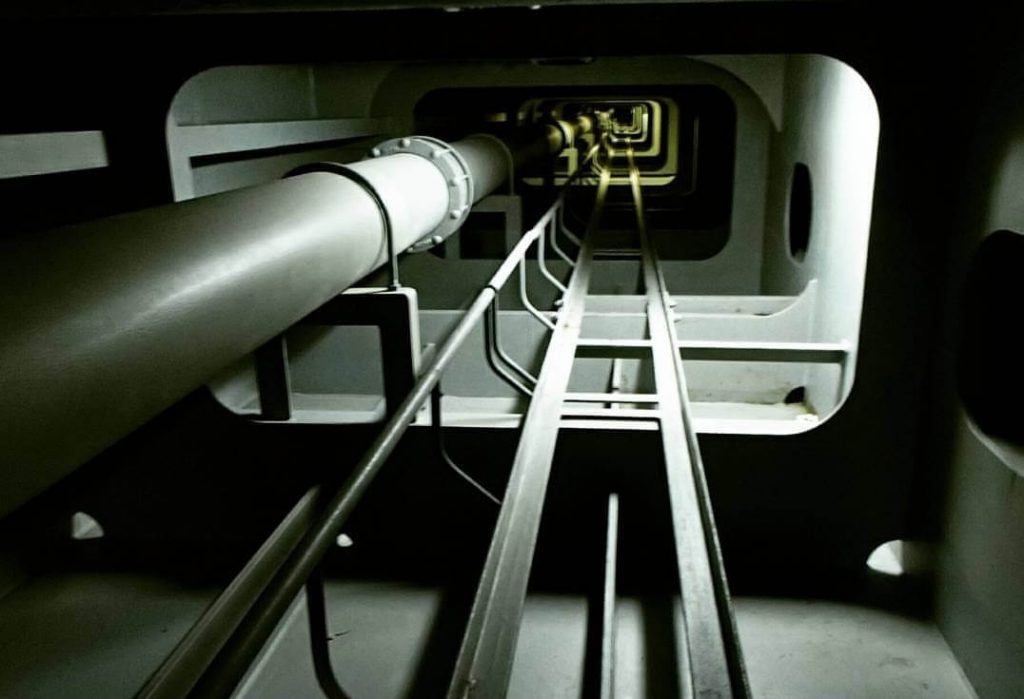 2)    Start the duct keel fan. It may be one in number or two depending on the size and volume of duct keel. The fan can be switched on from ship’s control centre or from the bridge.

3)    Switch on the lights for pipe duct. This can be done from the bridge or from ship’s control centre. Enough illumination should be present before entry.

4)    Open the entry hatch cover for pipe duct keel. Let it be open and allow it to ventilate for minimum 15 minutes for proper circulation of fresh air inside.

Related Read: Procedure for Entering an Enclosed Space on a Ship

5)    Prior entry to duct keel, duty officer has to be informed. One person has to be present standby at the entry of duct keel to communicate with the person inside.

Inspections to be carried out in the duct keel:

1)    One of the main problems in pipe duct keel is leakage from flexible coupling in bunker lines. In between Bunker pipeline are expansion joins or flexible couplings, whose purpose is to resist the ship’s flexing when ship is under heavy sea loads. During rolling and pitching, the flexible couple loosen and results into leakage of fuel in duct keel. It is important to check every flexible coupling visually during inspection and tighten them if found loose.

3)    Check the working of bilge alarms. There is duct keel forward bilge alarm and duct keel aft bilge well alarm. If any leakage causes overflow in duct keel, the bilge well will fill up and give alarm. Thus, it is important to make sure bilge alarms are working.

4)    Visually check the condition of bunker remote valve. These valves are very critical and important as they are used to transfer bunker from storage tanks to settling tank. They are operated remotely and can be operated manually in case of remote operation failure.

After Inspection of Duct Keel

1)    Make sure the bilge alarm floats are back to normal position and not stuck.

2)    After coming out of pipe duct keel, switch off the fan as the continuous running of the fan may have the risk of burning the motor.

3)    Closing the inlet and outlet flaps for ventilation is important. This is often forgotten, and during rains, water seeps inside the motor and decrease its insulation resistance and often results into the burning of the motor.

It is necessary to carry out an inspection at least once a month. As the duct keel is long, many ships have track and trolley arrangement to move along the duct. The trolley also aids to carry heavy things in the confined space. Make sure you lock the movement of the trolley with the help of a simple pin lock arrangement provided after use, or else it will keep moving freely when the ship is pitching and get damaged. There are also lights throughout the duct keel and not less than 50% of them should be from emergency switchboard. Duct keel has two accesses, one from the forward of the engine room and other from the collision bulkhead. The access hatch should always be closed when at sea.

How to Tackle Duct Keel Flooding?

Duct keel is a space which is not often inspected by the ship’s crew. A sounding pipe is usually provided in the engine room to ensure the duct keel is dry at all times. As it carries several pipelines for various purpose (Ballast, Fuel, steam etc.), a leakage in any of the pipe may lead to flooding of the duct keel and may cause serious stability issues if not corrected. There have been cases of the ship being capsized due to the flooding of the duct keel.

Following steps to be taken in case of duct keel flooding:

2. In case of major flooding, sound the general emergency alarm and invite manpower, inform the Master, Chief Engineer, and bridge

3. Keep checking the sounding of the duct keel frequently and measure the rate of increase in the level to asses the leak

Related Read:  How and Why to Take Manual Sounding On Ship?

4. Keep a track on earth fault alarms and do not take them lightly as electrical wiring also passes through duct keel

5. If the leakage rate is manageable, a portable pump can be used to pump out the bilges from the duct keel to sludge or bilge tank, depending upon the content of the keel

6. To check the area of the leakage, ensure the bilge level inside the duct keel is kept minimum by continuous pumping

7. A responsible ship officer must go inside the duct keel and check for the location of the leakage

9. Ensure to take similar precautions of entering an enclosed space and keeping rescue equipment and breathing apparatus ready before the entry

10. Use the trolley to travel in the keel and to locate the leak

11. If the bilge inside the keel is at a higher level and human entry is ambiguous, the ship can be ballasted to increase the aft trim

12. The officer then can enter from the forward or from the mid, depending upon the accessibility and bilge level

13. Once the leakage is located, try to repair it at the earliest or isolate the point of leakage

14. If the line/valve/tank cannot be isolated, empty the tank content from which the leakage is happening

15. If the tank from which the leakage is connected, cannot be emptied or isolated, the ship should continuously monitor the duct keel sounding

16. It is always advisable to keep all the access manholes shut and tight as a small leakage may turn to more prominent leakage leading to ingress of water in the engine or pump room in no time

Provision of a bilge suction pipe shall be made to prevent the flooding of duct keel in the event of the pipe being severed or otherwise damaged through collision or grounding. In case of duct keel flooding, after getting the approval of Master and Chief engineer, open the bilge suction valve to tackle the emergency.