A maritime emergency at sea does not come with an alarm. Still, ship emergency signals and alarms can help us tackle a crisis or avoid an emergency efficiently and in the right way.

Emergency signals or alarms on a ship are installed all over the vessel’s various systems and machinery to notify the crew about a dangerous situation that can arise from different types of emergencies onboard the ship.

Emergency alarms are of the audible and visual type to ensure that a person can listen to the audible alarm when working in an area where seeing a visual alarm is not possible and vice versa.

It is a standard practice in the international maritime industry to have an emergency alarm on the ship for a particular warning that is similar for all seagoing vessels, no matter in which seas they are sailing or to which company they belong.

Here are a few fantastic ebooks to get important maritime information in the next couple of minutes!

eBooks For The Smart Mariner 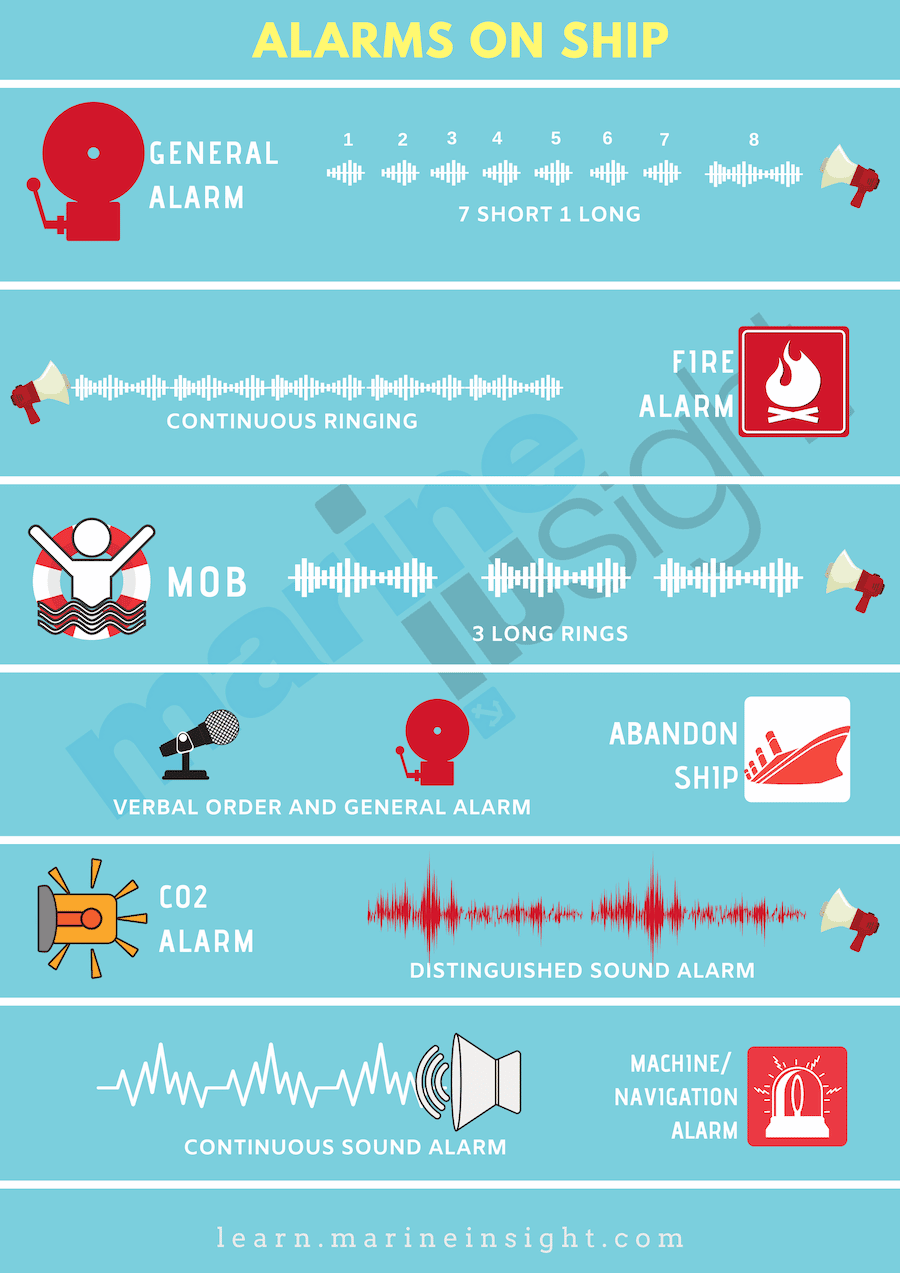 This commonness helps the seafarer know and understand the type of warning/ emergency or ship emergency alarm well and help tackle the situation faster.

7 Most Common Types of Accidents On Ship’s Deck

Types of Alarms on Ships

These are the different types of emergency alarms or signal onboard ship that is installed to give audio-visual warnings:

The general emergency alarm on the ship is recognised by 7 short ringings of the bell followed by a long ring or using the ship horn signal of 7 short blasts followed by 1 long blast.

The general alarm in a ship is sounded to make the crew aware that an emergency has occurred, such as fire, collision, grounding, or a scenario that can lead to abandoning the ship etc.

The vessel general alarm system activation point is located in the navigation bridge. Once the general alarm signal onboard is activated, i.e. seven short one long blasts (7 short 1 long blast), every ship crew must follow the instruction and duty’s listed in the muster list and proceed to the designated muster station.

Action to be taken by the crew once ship general alarm is sounded:

Importance of Fire Drills On Ships

The fire signal must be a continuous blast of the whistle or electrical bell for not less than 10 seconds. However, in most of the vessels, the fire signal is rung continuously on the alarm bell.

Once the master decides to dismiss the crew from fire stations, the general alarm will be sounded three times, followed by three short blasts of the ship’s whistle.

Action to be taken by the crew once the ships fire alarm is sounded:

A Guide to Fire Pumps on Ship

There have been many situations when a crew working on the ship-side or a passenger in a cruise ship fell in the water at high seas. When a man falls overboard, the man overboard alarm sound signal is activated on the ship.

The MOB alarm signal comprises the vessel’s internal alarm bell for 3 long rings to notify the crew onboard, along with 3 long blasts on the ship whistle to inform the other ships in the nearby vicinity.

A man overboard signal comprising light and smoke can also be mounted in the bridge, attached by the side of the lifebuoy. When thrown in the water, it will emit smoke and light to draw the ship’s crew or other ship around the vicinity.

Action to be taken by the crew once the ships MOB alarm is sounded:

When the emergency on board ship goes out of hand, and the ship is no longer safe for the crew on board ship, the signal for abandon ship is given verbally by the master to the station in charge of the crew on the ship’s Personal Addressing (PA) system.

More than six short blasts and one prolonged blast on the ship’s whistle and the same signal on the general alarm bell is used as an abandon ship alarm or sound signal onboard ship. However, the alarm sounded is similar to a general alarm; and everybody comes to the emergency muster station where the master or his substitute (Chief Officer) gives a verbal order to abandon the ship.

Action to be taken by the crew once Abandon ship is announced or sounded:

What is Integrated Bridge System (IBS) on Ships?

The ship’s engine room is fitted with different machinery, which is continuously monitored for its operation using a control and monitoring system.

The machinery in the engine room has various safety devices and alarms fitted for safe operation. If any machinery malfunctions, a common engine room alarm is operated, and the problem can be seen in the control room alarm panel, which will display the alarm.

Action to be taken by the crew once the engine room alarm is sounded:

The audible alarms shall be located to be audible throughout the protected space with all machinery operating. The alarms should be distinguished from other audible alarms by adjustment of sound pressure or sound patterns.

The alarm should activate upon opening the release cabinet door, which is used to open and release the CO2 bottle banks.

As per the SOLAS Chapter XI regulation XI-2/5, all ships shall be provided with a ship security alert system. The Ship Security Alarm system (SSAS) is silent sounded in a pirate attack emergency. When the SSAS is activated, no alarm is sounded on board the ship nor alert other vessels in the vicinity. Instead, this signal notifies different coastal authorities or competent authorities, whose proximity the ship is presently operating via a global satellite system to inform about the piracy.

Different Alarm signals of the vessel are clearly described in the muster list and the action to be carried out so that all the crew members can perform their duties within no time in an actual emergency.

It is of extreme importance that a seafarer knows the different types of alarms in a ship and recognise which emergency it represents.

Disclaimer: The authors’ views expressed in this article do not necessarily reflect the views of Marine Insight. Data and charts, if used, in the article have been sourced from available information and have not been authenticated by any statutory authority. The author and Marine Insight do not claim it to be accurate nor accept any responsibility. The views constitute only the opinions and do not constitute any guidelines or recommendations on any course of action to be followed by the reader.