The hull of the ship is the outer skin of the vessel which ensures there is no water ingress inside it and ensures the watertight integrity of the ship to maintain its floating status.

The outer skin known as the hull of the ship can be of a single layer or of double-layer, i.e. there are two hulls of the ship known as double hull. The double hull is most commonly found in oil tanker ships.

The International Maritime Organisation (IMO) introduced the regulation 13 F of Annex 1 of MARPOL, which effectively mandated double hulls for newly built oil tankers of 5000 deadweight tonnage and above. The Exxon Valdez oil spill disaster also led the U.S. Government to make double hulls compulsory for all new tanker ships coming to the U.S. ports. After the sinking of vessel Erika off the coast of France on December 1999, IMO proposed accelerating phase-out of single-hull ships.

where B is the beam or width of the vessel

The double side tanks require a minimum width of two meters.

However, passenger ships are also provided with double skin as per the SOLAS  under Chapter II-1: Construction – Structure, subdivision and stability, machinery and electrical installations, Regulation 12.

As the oil carries dangerous and pollutant cargo in fluid form, the double skin of oil tanker is very crucial.

Double hull, as mentioned earlier, are tanker ship hulls with double layers of the watertight hull surface. The inner and outer layers of the hull are on the bottom as well as the sides of the tanker ships. The double-layer construction helps in reducing the risks of marine pollution during a collision, grounding, and any other form of ship’s hull damage. It also saves the ship from water ingress or flooding if the outer layer fails.

Single hull has only one outer watertight layer which runs throughout the structure of the tanker ship. As a result of only one layer, single-hull tankers pose a greater threat to the marine environment during any kind of accidents.

However, the rate and degree of the collision, speed of the ship etc. play a crucial role in preventing damage to the inner skin of the double hull. If the vessel collides or ground with high-energy or speed, the internal surface of the double hull may also rupture and lead to oil pollution.

In double-hull tankers, the space between the two layers is used as dedicated ballast tanks for ensuring the ship’s stability.

The ballast tank spaces extend for the full length of the cargo carrying area, providing an extensive safety measure. Single hull tankers do not have such ballast spaces.

In comparison to single hull design, double hull design is said to have less stability as it raises the centre of gravity and reduces the meta-centric height of the ship. Moreover, there is a risk of loss of stability because of free surface effects in cargo and ballast tanks. Single hull ships are considered more stable as compared to double hull tankers.

Corrosion is considered one of the main reasons for the failure of hull structures in tankers. Improper maintenance of ballast tank structures and failure to maintain the integrity of the protective coating and cathodic protection in ballast tanks have lead to structural failure in the past. In double hull tankers, the surface area of the tanks is more than double than that of single hull tanks. Thus they require more maintenance during the operating life. 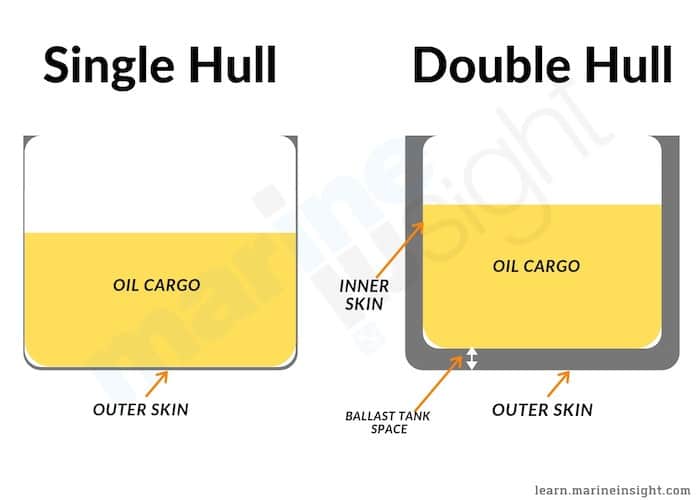 As compared to the ballast tanks of single hull ships, those of the double bottom tanks are easily accessible because of their increased height and width. This makes the work during inspection much easier. However proper precautions must be taken into consideration while entering confined spaces of ballast tanks.

Openings in the structure at least one-meter × 0.6 meters should be provided in every compartment for personnel movement in both the fore and aft and the athwartships directions.

Structures of ballast spaces in double hull tankers are more susceptible to hull fractures and minor failures as compared to single hull tankers. Double hull tanker operators have often complained about cargo leakage into ballast tanks as a result of stress concentration, fatigue, or construction defects.

Related Read: A Guide To Ballast Tanks On Ships

Provision for adequate air circulation in all double hull tanks is essential and purge pipes may be required in some locations.

There is Increase of the ship’s size of the double hull ship for the same quantity carried compared to a single hull tanker.

According to research, stresses in the structure of double hull ships are much higher than that in single hull ships. 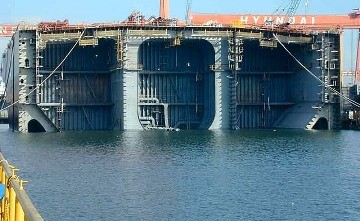 Thus double hull ships are more susceptible to minor structural failures as compared to the single hull tankers. This can also be a matter of concern during accidents which cause oil spill as a result of structural failure.

Ventilation is of utmost importance in double bottom tanks of double-hull tankers as they need an inspection from time to time. As double bottom tanks are free from any internal structure, it is easy to access them. However, they are not so friendly when it comes to close-up inspection, or accessing side tanks or deckhead areas; whereas though tanks of the single-hull are difficult to access, their confined areas much more ‘inspection friendly.’

Related Read: Procedure for Entering an Enclosed Space on a Ship

The cleaning of cargo tanks in double-hull tanker ships is easier and faster. The reason behind it that most of the vessel’s cargo tank framing is located in the ballast tanks, leaving smooth surfaces in the cargo tanks.

As of today, no single-hull oil tanker ships are carrying heavy grade oil cargo are in operation since 2015.

To enhance the safety of the ship and to avoid oil pollution for all type of vessel carrying oil as a fuel, the IMO has adopted a regulation under MARPOL Annex 1 that requires all types of ship with an oil fuel capacity of 600m3 and above to have the fuel tanks area double-hulled. This rule came in 2007 and all ships with building contract placed on or after August 1, 2007, or with keel laid on or after February 1, 2008, must have double hull fuel tanks.

Additionally, all vessels delivered after August 1, 2010, must comply with this regulation.

Under this regulation, the fuel oil tank with a capacity of 2,500 m3  is also included.  This new regulation intends to require the same standard of safety and pollution prevention from fuel tanks as is needed for cargo tanks in oil tankers. It is assumed that all of the cargo ships will have double-hulled fuel tanks by 2040.