The shipbuilding industry stands out from other industries in the aspect that it is not based on unit production. For example, in the automobile industry, cars of a particular model or design are produced on an assembly line since every product of a particular design is similar to the other. But ships are not constructed this way, every ship is based on the owner’s requirement. Hence, even if the basic hull design may be the same, the dimensions, capacity and systems used in one ship may be very different from another.

In light of the above, it is important to understand that the shipbuilding industry comprises of manufacturing processes quite different from other manufacturing industries. Which is exactly what this series of articles will deal with. 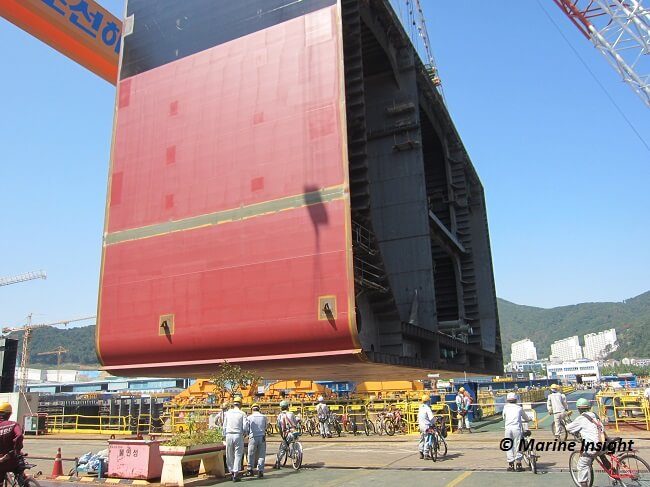 We will, in detail, discuss the stages of ship construction right from a steel plate to the end product that is delivered to a client. Many book authors have explained the same by first describing the layout of a shipyard. This method of explanation often turns out to be complex for a reader who is not well versed with the ship-building process. Hence, we’ll follow quite the opposite in this article, by first explaining all the processes in the order they are practiced, and once we are clear about them, we will see how a shipyard is laid out keeping in mind the sequence of these processes. 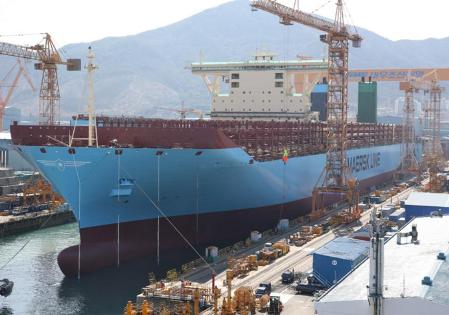 Once the steel plates are procured by the shipyard, they are stored in the stockyard. Plates of different thicknesses and grades are available in standard dimensions (4 meter x 6 meter or 8 meter x 10 meter, and so on). There are usually two positions of stowing plates- Vertical Stowage and Horizontal Stowage.

Vertical stowage of plates is more preferred because it enables the mill scale to fall of naturally due to gravity. This reduces the time required for blasting in later stages. Vertical stowage also consumes less space than that required by horizontal stowage. Picking individual plates using cranes becomes easier.

Many modern shipyards carrying out multiple projects at the same time also practice methods of plate stowage scheduling. In this, each plate is marked with the project it has been designated to, and they are stored in an order that is synchronous with the working schedule or the master plan of the shipyard.

Rolled sections (Flat bars, Tee sections, Bulb bars, Equal Angles, Unequal angles) are used as stiffening members for shell and deck plating. They are ordered by the tendering department based on the scantlings provided by the structural drawings of every project. Rolled sections are stored in the stockyard, mostly in the same stockyard in which steel plates are stored.

Straightening and Removal of Residual Stress: The plate obtained by rolling in the steel plant is not completely straight, though it may visually appear to be so. Plates may also be mangled during transit from plant to the shipyard. In order to prevent misalignment of two such plates during welding in a later stage, they need to be straightened. This is carried out by passing the plate through a series of rollers, also called mangles (See Figure 1). Under the rollers, the plate undergoes multiple cycles of bending until it is straightened. 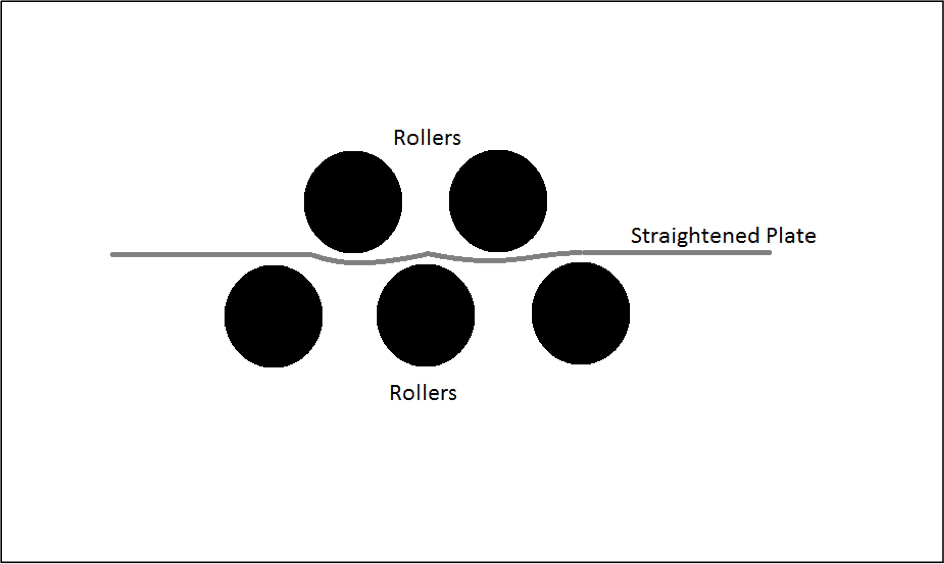 The hot work and cold work carried out on the steel in the steel plant leaves residual stress in the steel plates. If these stresses are not removed, the added loads experienced by the hull girder may subject the plate to stress levels higher than predicted values when the ship is at sea. Straightening of plates by repeated bending cycles also removes these residual stresses.

Mill Scale Removal: Mill scale is a brittle layer of iron oxides on the steel plate. It must be removed from the plate surface because:

However, the presence of mill scale also acts as an advantage when the steel plates are stocked in the yard. They form a protective oxide layer on the metal, thus preventing rusting of the plate surface when stowed for longer time in the yard.

Mill scale is loose, but not loose enough to completely fall off the metal surface without application of external force. Some methods used by shipyards to remove mill scale are:

It is very important to control some of the parameters of this process, in order to ensure that the amount of material scraped is neither less nor more than desired.

The incident mass, size and velocity of the shots are pre-decided to ensure that the mill scale is completely removed, but at the same time the scraping should not be such that it removes steel from the surface. 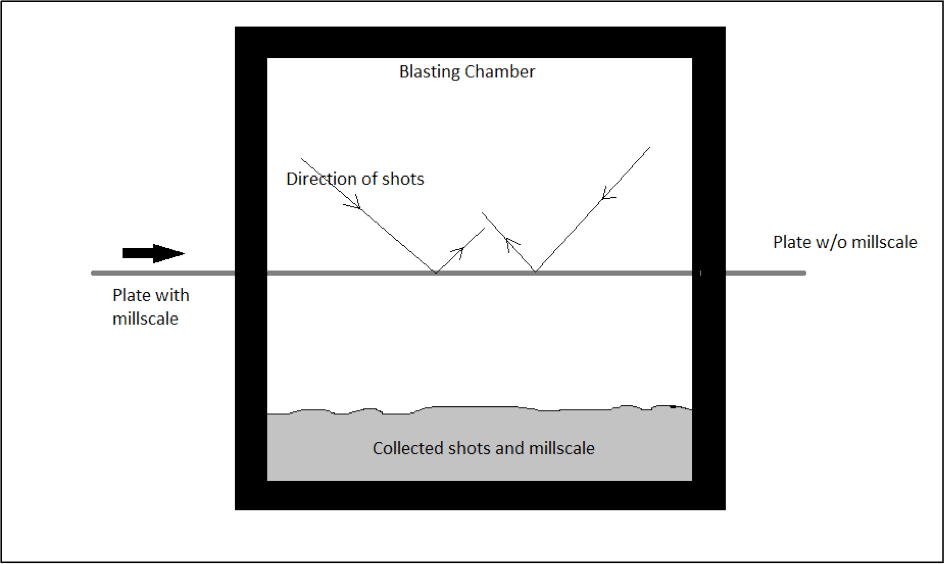 Shot blasting has certain disadvantages too. The incidence of high velocity shots exert stress on the surface of the plate. If stress levels are more than the yield strength of the material of the plate, then it enters into the plastic region.

A unique behaviour is observed at this stage. To explain that, let’s revisit the basics of the stress-strain curve of steel. When steel is subjected to stress levels within the proportional limit, removal of the load does not leave any deformation in the specimen. But if the stress levels go up to the plastic region, there is certain amount of permanent deformation even after the removal of stress. So, when subjected to stress again, the material would actually have less capacity to yield that before. In other words, its reserved plasticity has now reduced.

It is the above phenomenon that takes place in case of shot blasting. This reduction of plasticity is also called cold hardening. However, this effect can be prevented by controlling the parameters of the blasting chamber.

Once the plate is completely free of mill scale, the supervisor checks the roughness of the plate surface. In case the plate it too rough, it would be unfavourable for proper welding. And if too smooth, it would not provide enough surface roughness for proper adhesion of paint. Hence, the surface of the plate at the exit of the blasting chamber is compared with a standard specimen which has the required roughness. In shipbuilding practice, the roughness standard maintained is Swedish Standard (SA 2.5).

Priming and Drying: After the mill scale is removed, the plate is passed into a chamber in which a primer is sprayed on both surfaces. Priming protects the steel from corrosion. The primer applied is usually a zinc-rich coating, and it should be chosen such that it does not interfere with the welding and bending of plates. After the plate is primed, it is immediately passed on to the drying chamber, where hot air dries the surface and prevents moisture from interfering with the process.

The surface treated plates are to be cut into desired shapes and sizes, in order to be developed to the required three dimensional shape or be used as straight plates for other structural components. Now, it is very important for a shipyard to increase its production, as a result of which wastage of material is prevented to the maximum extent possible. How?

Plates of the standard sizes, after being surface-treated, undergo nesting. It is a process in which the plate is scanned, and by the use of algorithms, the shapes to be cut out of the plate are marked on the plate by the computer controlled marker. This algorithm makes sure minimum scrap metal is produced from each plate. Such a plan is called Nesting Plan.

Once the nesting plan is prepared, the plate is ready to be cut. Cutting can be done in three different ways:

However, shearing does have a major disadvantage, that is, intricate shapes like brackets, scallops, small radiuses, and bends cannot be cut out by shearing. 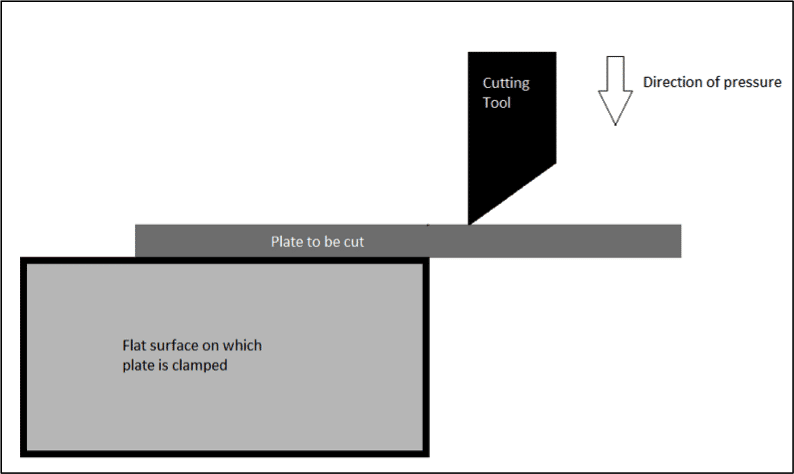 There are two methods of thermal cutting:

An interesting theory lies beneath this method. It is important to understand this theory in order to know if this method is also applicable for aluminium, which is now widely being used as a structural material on ships. When the oxygen lever is pressed, the flame increases the metal temperature. For steel, the metal becomes red hot at ignition temperature (800 degree Celsius). After a certain time when the temperature reaches to the melting point of the metal oxide (which is 1000 degree Celsius for steel), the metal oxide begins to melt out. Since the melting point of mild steel is approximately 1500 degree Celsius (higher than that of its oxide), this method of cutting does not melt the metal, and hence is feasible for steel.

Now, for aluminium, the melting point of its oxide (2200 degree Celsius) is more than that of the metal itself (600 degree Celsius). Also, aluminium is such a metal which is always layered with aluminium oxide on its surface. So, if aluminium plates are cut by oxy-fuel methods, the oxide layer begins to melt first. This results in increase of thickness of the oxide layer on the plate, with molten metal in the inside layers. As a result, the entire plate crumbles. So, how are aluminium plates cut? The answer to this lies in the next type of thermal cutting method discussed below:

In this process, the flame is confined, resulting in higher quality of cut edge. Both ferrous and non-ferrous metals of any thicknesses can be cut using this method. 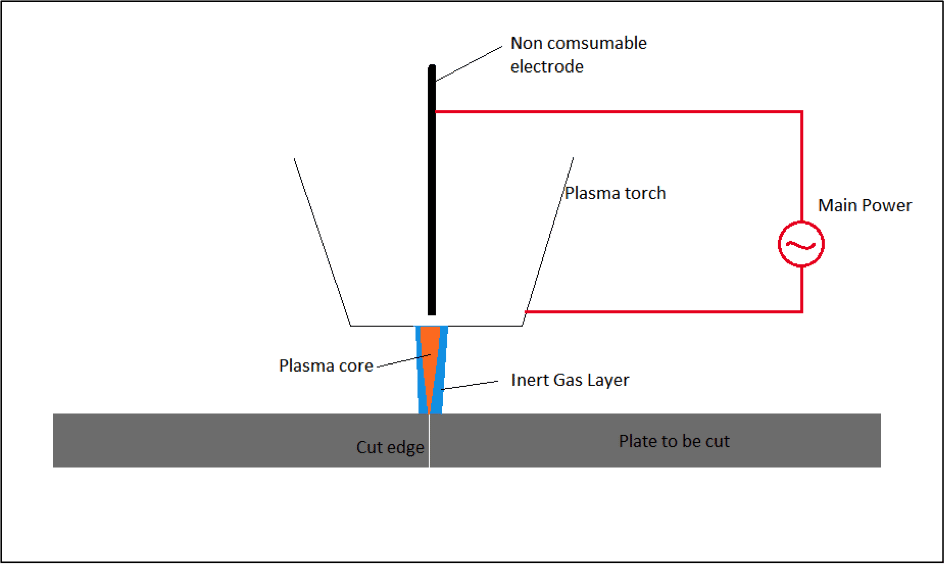 In this article, we have seen how the plate makes its way from the stockyard to the surface treatment plant. Then, followed by the nesting plan, the plate is cut into required shapes. All these processes, after the plate is taken from the stockyard, are carried out in the Hull Shop of the shipyard. In the next article of this series, we will see how plates and sections are given three dimensional shapes and oriented before welding processes begin.

11 Steps that Ensure Occupational Safety and Health in a Shipyard

How to Perform Ship’s Stern Tube Integrity Test in The Dry Dock?