Have you ever noticed that ships, unlike most aeroplanes do not have the same kinds of rudders? The type of rudder that would suit a particular ship is a decision that needs to be based on various factors like hull form, speed, propeller design, the structural arrangement of the stern, clearance between the propeller and the stern, and also a few hydrodynamic factors that dictate the flow of water aft of the propeller.

How ship designers go about deciding the type of rudder, is actually an iterative process. In the concept ship design stage, we actually do not (or cannot afford to) decide the suitable rudder for the ship. So what designers and naval architects do is, estimate a very approximate dimension of the rudder along with the propeller. But as we enter the preliminary design of the ship, the rudder and propeller dimensions are almost fixed, giving us an almost clear idea of the type of rudder that would best fit the design problem. 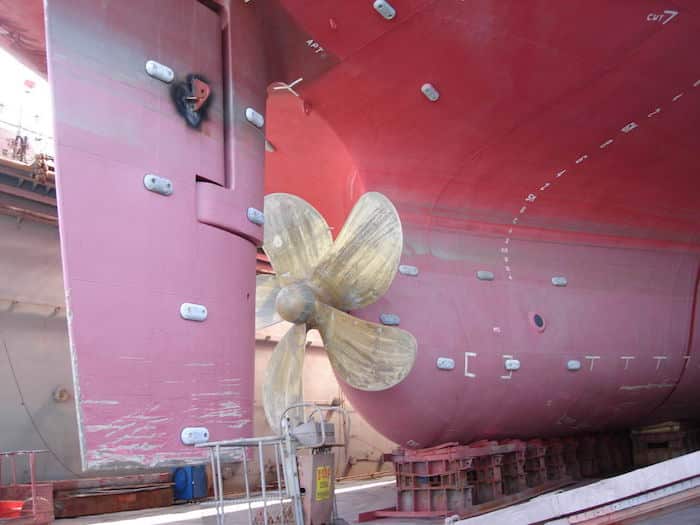 However, what becomes significantly important from a designer’s point of view, is deciding on the type and location of the rudder, depending on the hull and propeller design.

Let’s try to understand this in a simple way.

The selection of the proper type of rudder is as important as the location of the rudder behind the propeller. The location of the rudder should be such that it is properly oriented within the propeller’s outflow, so as to produce the required turning moment on the ship (Before we go ahead, you might like to read How does a rudder work on a ship?). A slight change in the rudder type, dimension, and position can bring about a huge variation in the ship’s response to the rudder, as well as the turning ability of the ship. So, optimization is the key.

Understanding the design of ship propeller

Understanding the design of container ships

Understanding the design of oil tankers

Types of Rudders For Ships

To broadly categorize conventional rudders, there are two types of ship rudders:

A genuine question that must have come up in your mind is, why is such a position chosen for the rudder stock? The answer lies in simple physics. The centre of gravity of the rudder will lie somewhere close to 40% of its chord length from its forward end. If the axis of the rudder is placed near to this location, the torque required to rotate the rudder will be much lesser than what is required to move it, had the axis been placed at the forward end of the rudder. So, the energy requirement of the steering gear equipment is reduced, therefore lowering the fuel consumption of the ship. 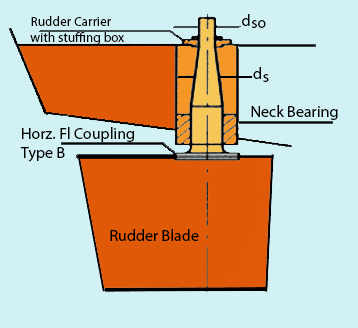 These rudders have their stocks attached at the forward most point of their span. Unlike balanced rudders, the rudder stock runs along the chord length of the rudder. The reason is simple. In this case, the torque required to turn the rudder is way higher than what is required for a corresponding balanced rudder. So, the topmost part of the rudder has to be fixed to the spindle so as to prevent it from vertical displacement from its natural position. However, unbalanced rudders are not widely used now.

Having discussed the conventional types of rudders, let us shift into something yet more interesting. Researchers and ship operators had found significant problems with the balanced and unbalanced rudders. That is, in case there was a failure of the steering gear mechanism while turning a ship. The rudder would remain still with its angle of attack in that condition. The solution to this was found in designing an optimized Semi-Balanced Rudder. 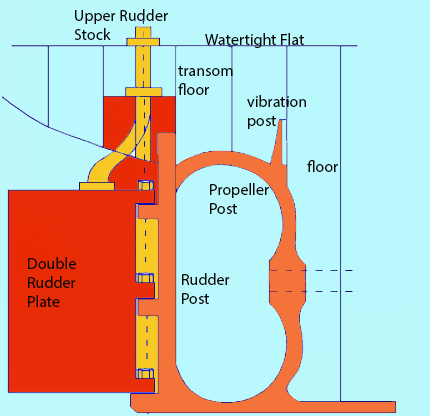 The top part being unbalanced will help in acting as structural support to the rudder from vertical displacement. And the balanced part will render less torque in swinging the rudder. As a result, a semi-balanced rudder returns to the centreline orientation on its own if the steering gear equipment fails during a turn. 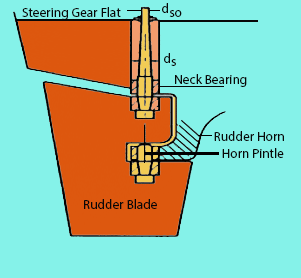 Apart from these, designers have developed some other, rather unconventional rudder systems, which gets more interesting to look into.

Understanding the design of ship’s hull

You must have watched an aeroplane’s wings closely. Did you watch those flaps coming in and out of the aft end of the wing? Why do you think they do that? Primarily to change the effective angle of attack of the entire aerofoil section of the wing. You’ll see, during a takeoff, how all the flaps are completely deployed. That actually helps in attaining the effective angle of attack so as to get the maximum lift force.

The same principle, when used in rudders, provides a similar result. Just that, in case of rudders, the flaps are not retractable and they have their significant effects when the rudder is given some angle of attack. 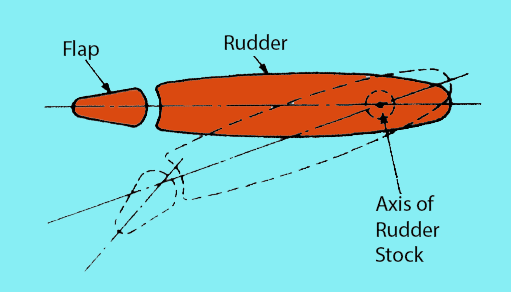 Perhaps one of the most innovative rudder mechanisms you will ever come across. Suppose you have a ship, too large to be manoeuvre in a basin with size constraints, such that the ship cannot use its propeller during the manoeuvre. This situation often arises in case of large ships operating in space-constrained basins, or in any case of low-speed manoeuvres.

So, a Pleuger rudder (as you can see in the figure below), has a smaller auxiliary propeller housed within it (which runs by a motor). As this housing is mounted on the rudder itself, it generates a thrust (which is smaller than what is generated by the ship’s main engine propeller) in a direction that is oriented along the rudder, therefore allowing effective manoeuvre in slow speed condition. 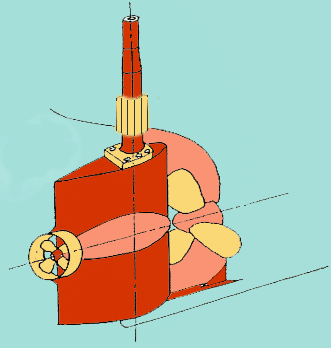 Such a rudder can be used in normal conditions also. Just that, in normal speeds, the Pleuger is not operated. However, when the Pleuger is run, the main engine propeller must not be operated simultaneously, which will otherwise cause the Pleuger to be torn away.

You must be wondering why a propulsion system has popped into the discussion when we are interested in rudder systems. Well, that’s something you need to thank the researchers for. Because this propulsion system is one of a kind, which acts as a rudder itself. It doesn’t need a rudder control surface to change the direction of the ship. How? Read on.

As you can see in the figure below, this propeller has a completely different orientation. To visualize it in simple terms, it consists of a number of hydrofoil blades mounted on a disc, which is in turn, mounted onto the hull. The disc rotates in a horizontal plane, about a horizontal axis, and therefore imparts a rotation into the blades.

But how does a rotation in horizontal plane impart thrust to the ship? Here’s the answer. The blades themselves can be adjusted to have a varying angle of attacks during the operation of the propeller. Depending on that, the direction and magnitude of thrust are varied. Well, if we are manipulating the direction of the thrust too, then we don’t actually need a rudder. Which is actually why a Voith propeller acts as a combined propulsion and steering system for the ship.

It is of no doubt that propulsion and steering systems have been innovated and invented to a great extent when compared to many other aspects in the ship design industry which still require the eyes of modern technological applications. However, as we are transiting into an era of faster, and environmentally safer technologies, newer hull forms are being developed. This has given the industry a wider scope to develop and design newer steering systems for the future.

Types of vibrations on ships

Understanding the design of bulk carriers