The very first cargo ships were built to carry cargo in bulk. Even in most general cargo ships, wooden containers or boxes were used to stow unit cargo. But, with the inclusion of wider types of cargo, containerisations was deemed suitable for compact, fragile, and cargo requiring special care during transit. Hence, was felt the need to design special types of ships that could not only be loaded with these containers, but were also able to maintain the safe conditions of the contents of the containers.

In this article, we will discuss the design aspects of container ships. It is important to understand, from this article, how the design of a particular type of ship is dictated by the type of cargo, the ports on route, the functionality of the ship, and also the economic trends in the market. Also, before understanding container ships design, it is advised that you have a basic knowledge of fundamental ship terminologies, and those related to hull geometry (e.g. Block coefficient, Midship area coefficient, etc.)

There are different categories of container ships, based on different ways in which they can be categorised. The most widely operating types are as follows:

Based on overall sizing-

Based on Length, Beam, Depth, and Tonnage-

Based on mode of handling-

Based on Range of Service-

To answer that, we will need to first understand another aspect of the container industry. Goods shipped in containers are often of high value, and high priority. For example, if a marine diesel engine for a ship being constructed in a shipyard in India is to be shipped in from Germany, the shipment would be made in a container, and is a high priority shipment because the installation of the engine into the engine room is a step in the construction process that would determine the possibility of delays in the later stages of construction. Also, the equipment needs to be delivered without any impact or damage. Thus, container ships are tightly time bound ships. They have a very low turnaround time, that is, the time they spend at a port for loading and unloading has to be minimum in order to be able to call the next port without delay. It is due to this reason, container ships fall in the category of high speed ships. In order to achieve a high speed, the resistance of the hull needs to be minimized, which is obtained by a fine form hull. In other words, container ship hulls have low coefficient of buoyancy, ranging from 0.6 to 0.7.

Another notable geometrical characteristic of container ships is the high prismatic coefficient of the hull-form. That is, the hull section for most part of the length of the ship is almost rectangular. This is done in order to accommodate maximum number of containers below the deck.

One of the most important structural drawings that are prepared during the design of a container ship is that of the midship section. The midship section of a ship is prepared with a lot of design and functional considerations in mind, which include the type of cargo, stowage methods to be used by the ship, capacity of the ship, etc. In fact, a ship type is often identified by its midship section. 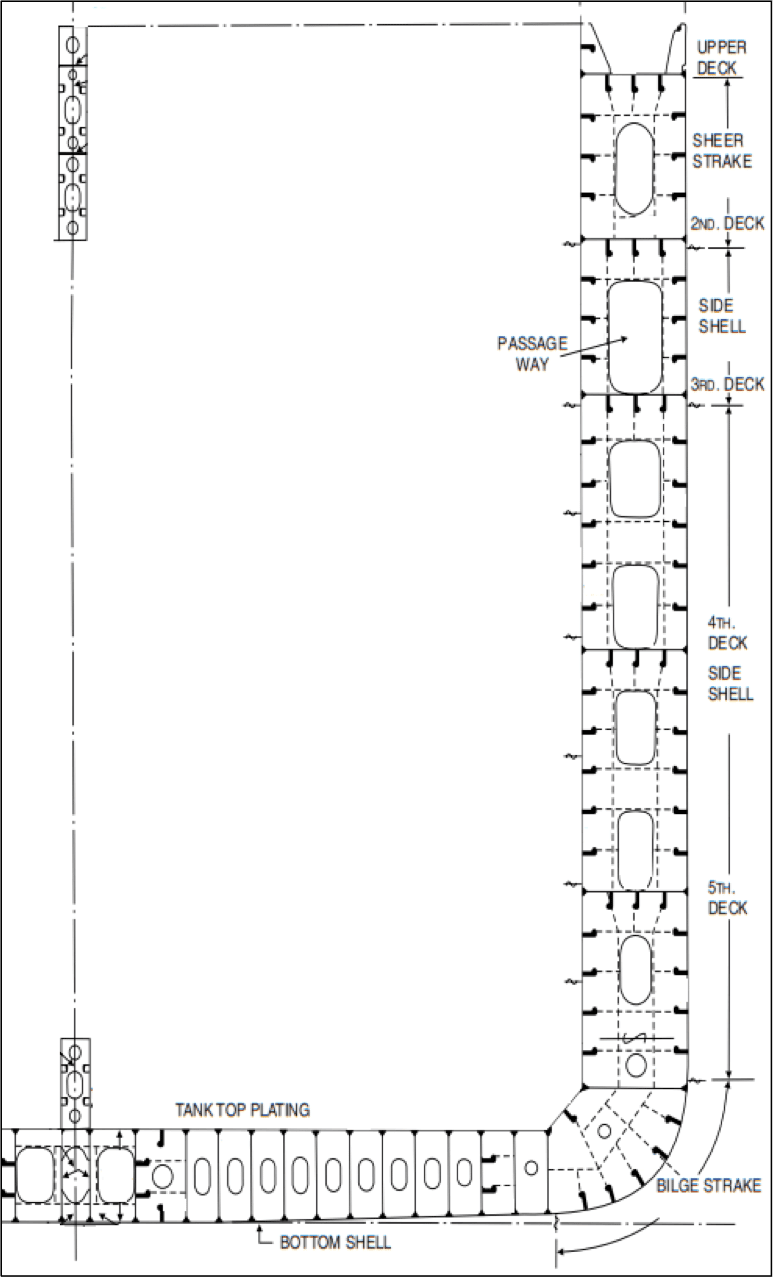 Let us start by recalling the shape of a water bucket. You would have noticed that the rim of every water bucket is always twisted outward. Why do you think this is done?

Try cutting off the rim of the bucket, or for that matter, cut off the rim of a paper cup and try holding it with some liquid in it. You would notice that the paper cup would not resist the torsion. It would twist and eventually rupture. This happens because the entire structure of a bucket or a paper cup or any open box has a very low polar moment of inertia. This results in giving it a very low torsional strength. Thus, in order to strengthen open box like structures against torsion, additional material is added to their rims. In other words, one simply increases the polar moment of inertia of the cross section of the structure. But how is this related to a container ship?

We know that the hull of a container ship is an open box like structure. When a ship is at sea, it is subjected to various wave loads. In one of the load cases, when the direction of the waves is at approximately 45 degrees to the velocity of the ship, port side of the forward section and the starboard side of the aft section would experience a wave crest at the same time, and vice versa. This results in a type of periodic loading which causes the hull to twist. This effect is called torsion, and is shown in the following figure. 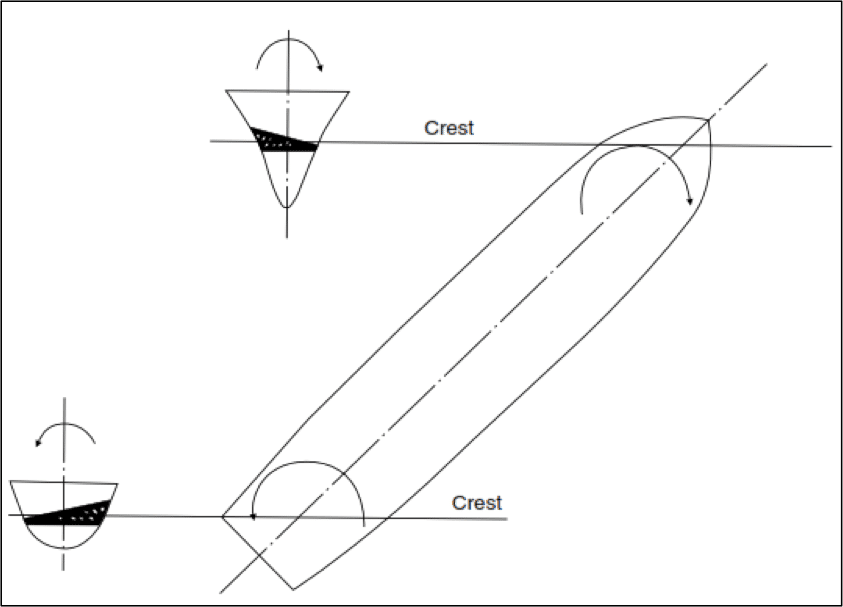 Fig. Torsion in a container ship moving in quarter seas.

Imagine the effect of cutting the strengthened rim off the paper cup. The same effect when extrapolated to that of a container ship, would result in devastating failures of the hull structure due to torsion. In order to prevent this, the topmost edges of the port and starboard sides of a container ships are strengthened with high scantling web sections, creating a box like structure at every frame. This is called torsion box. A torsion box runs along the entire length of the ship from the aft peak bulkhead to the forward collision bulkhead. 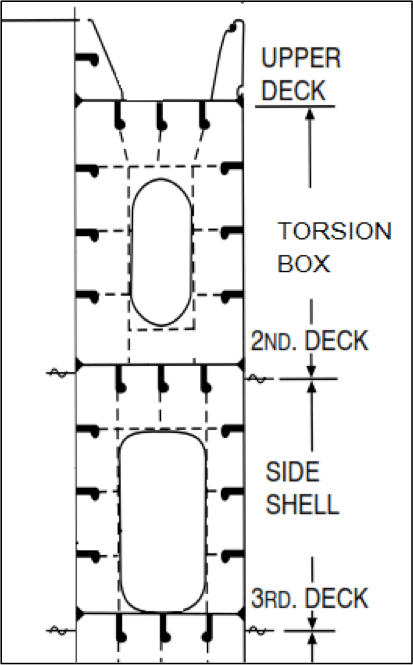 Classification societies have laid down separate set of rules for the design of torsion box for container ships. Today, the hull girder is modelled on an FEM platform and its torsional response is analysed for different sea states. The torsion box needs to be redesigned if the torsional stresses on the hull girder are above the safe limits. The inspection of torsion box is always treated as a high priority in annual structural surveys, as it plays a significant role in determining the strength of the hull structure.

The stowage of containers on a container ship is another aspect that the designer has to deal with. Though it may come across as something insignificant, improper stowage has resulted in most of the accidents related to container ships.

This complicity of container ship design is therefore solved by means of special computer programs specially designed to generate container loading plans for a particular loading case, which keeps in mind, the series of ports a vessel needs to call, and also the strength and stability aspects of the ship. Another factor that is always taken care of in the plan is, the visibility from the bridge. The containers loaded above the deck and forward of the navigation bridge are to be loaded such that the line of sight from the bridge is not affected. That is why, if you take note of a loaded container ship, the stack of containers forward of the bridge reduces in height as one moves to the forward-most stack. This, however, reduces the total amount of containers that can be carried by the ship. Hence, many ultra large container ships (e.g. Maersk Triple E class) have their superstructures shifted to the midship, in order to be able to accommodate containers to full height aft of the superstructure.

The study of design of container ships does not stop at this. There are reefer ships which are specially designed to carry refrigerated cargo in refrigerated containers. They are equipped with cooling systems connected to each container, which is a different study in itself. Also, recent trends in the market have encouraged the use of slow steaming, which has resulted in most container shipping companies to carry out extensive nose jobs and alteration of propellers on their ships. Though this might seem to be in contrast with the high speed requirement of container ships, these ships still operate at higher speeds than oil tankers and bulkers. Larger diameter and low RPM propellers have seen to offer more propulsive efficiency. The optimisation of container ships for current industry requirements is something that is dynamic in nature, and this requires ship designers to be aware not only of newer possibilities of design, but also to be able to predict the trends of the industry a few years ahead of time.