You are here: Home › Naval Architecture › Understanding Different Types Of Manoeuvres of a Vessel
TwitterFacebookLinkedInPinterestBuffer

Before venturing deeper into our topic of discussion, let us first understand what the term ‘manoeuvrability’ of a ship means.

Manoeuvrability is defined as the inherent ability of a vessel to change its course/path.

Understanding the factor of manoeuvrability of a vessel is extremely important to a designer or a seafarer, along with other aspects such as structural design, machinery, propulsion, stability and seakeeping.

As a ship has to endure long voyages through different weather conditions, it is important that the performance of a vessel during the day-to-day instances of its voyage are not compromised on:

In fact, various types of manoeuvres a ship needs to execute may be plentiful and enlisting all of them will be difficult. Needless to say, manoeuvring is an important pastureland in the field of marine design and analysis of vessel performance post-design. 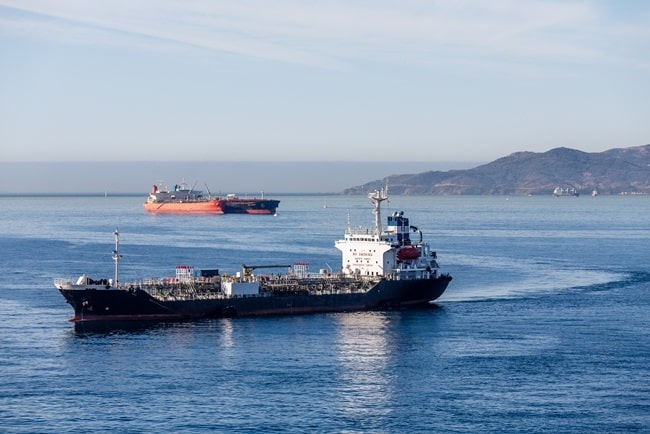 Now the question arises, is turning or stopping a ship similar to that of a car? The answer is a very big NO. Unlike cars or other modes of land transport, one of the biggest problems in manoeuvring marine vehicles like ships is the hydrodynamic water-body interaction that takes place. This makes the problems of motion and control complicated.

Let us try to understand this with an example. Suppose you’re driving a car and need to stop hastily. You apply the brakes and in a few seconds, the car comes to a dead stop. Or in another case you are required to make a quick swerve while driving on a hilly road. You promptly tilt the steering wheel and the car takes up the desired path almost instantaneously.

Unfortunately, this is not possible with ships. Firstly, because unlike cars, ships do not run on solid surfaces and hence cannot have brakes. Secondly, the forces that act on a car are entirely different from the hydrodynamics of the surrounding fluid that acts on the ship’s large inertial mass (which doesn’t allow it to be as responsive as the car).

Hence, prediction of motion controllability in the case of a ship is a tedious job not only at design/construction stage, but also at the operational stage.

Rudders and various other control surfaces are provided to control the motion of a ship at sea.  A good manoeuvre requires a proper hydrodynamic interaction between the control surface and the ship structure as a whole.

Control surfaces such as rudders, therefore, are the external means of aiding manoeuvrability through interaction with the hydrodynamic parameters associated with the vessel.

Also, it is essential to note that all kinds of manoeuvres are triggered off by the application of rudder force in some specific direction.

Right after the launch, a ship undergoes all the necessary trials under certain predefined conditions to assess these manoeuvring abilities.

IMO has its own set of rules slated for conducting each of these manoeuvring trials for optimising the maximum feasible limits with the best performance of the vessel.

What are Manoeuvring Trials?

Just as all other aspects of the ship namely engine, ballast, cargo handling, etc. need to undergo trials, the vessel’s manoeuvrability aspects are also tested to ensure that it can safely navigate under worst-case scenarios.

Based on the possible manoeuvres the vessel can have, a certain set of trials are conducted for each form of manoeuvre. The results in the form of dynamic variables are then compared with the pre-defined standards.

These sea trials help in acquiring the entire data output of the vessel eliminating the scaling complexities of a model.  Moreover, in case flaws are detected during trials, they can be rectified right away without any uncertainty, prior to the delivery of the ship.

However, there are certain drawbacks of conducting vessel trials and the results received from the same. They can be enlisted as:

Before conducting manoeuvring trials, for accurate results, it is essential to ensure that the conditions are congenial for a trial and are in accordance with the required standards.

Some of the common manoeuvring sea trials a ship is put through are:

This is the most common manoeuvre a vessel may be required to do every now and then. Let us take some instances such as making a swerve around a landmass ( island, port, harbour, other vessels), taxing/berthing for cargo handling, making its way through a canal or heading back to its original destination after encompassing its destination. Turning is inevitable in ships.

The ‘Turning Circle Manoeuvre’ can be explained briefly as:

Though this may seem quite simple, it has a whole lot of hydrodynamic interaction involved. Pertaining to which, the turning may be segregated into 3 different phases: 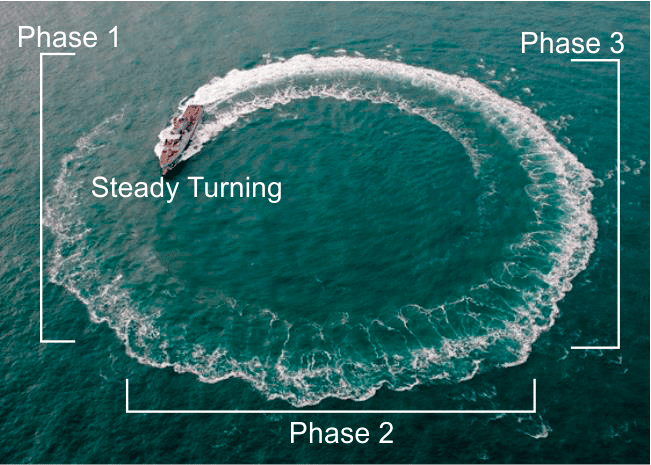 This is when the rudder force is first applied whilst the ship is originally surging in a definite straight line without any ‘yaw’ (rotatory motion about the z-axis). Moreover, due to the absence of any transverse forces and moments, both the ‘sway’ (side-to-side or port-starboard motion) and ‘yaw’ velocities are considered zero. However, due to the application of the rudder angle, some forces and moments are induced in the transverse direction. This gets aggravated by the interplay of the hydrodynamic factors.

One important question might be arising in your mind; why is that for a starboard turning phase, the ship drifts to port for some time before finally reverting to starboard? This is because, after the application of a rudder angle, the rudder creates some force on the starboard side. This force is reciprocated by the hydrodynamic force as an equal and opposite reaction force on the port side. As other forces arising due to the hull are absent during this phase, the ship tends to drift sideways to port!

When the forces come in equilibrium, the ship again makes a starboard turn.

In this phase, the ship is about to make a complete 90-degree change of heading from its initial path of heading. The moment induced by the hull gains some predominance by this time, thanks to the increasing drift angle caused by the rudder moment. After some time, the rudder moment balances the hull moment. At the second phase, not all angular and linear velocities and accelerations are equal to zero.

As the rudder is kept a constant deflection, the ship continues to trace a circle. In the third phase, the hull moment exceeds the moment induced by the rudder and the ship reaches a Steady state of Turning. The angular and linear velocities remain constant as the ship turns in a circle of constant radius. As all external influences are diminished, the acceleration parameters become zero. The centrifugal force continues to act on the ship.

The ship will continue to circle along the same trajectory if the rudder is not brought back to its mean position.

In all of its three phases, the ship apparently tends to move about some fixed point. This is due to the relative frame effects of motion. This fixed point about which the ship appears to be rotating even when it is revolving is called the Pivot Point. This point is a subject of special interest as it is the point at which the drift angle is zero. At any point, all forces and moments are in. In general cases, the pivot point lies between one-sixth and one-third of the ship’s length from the bow. 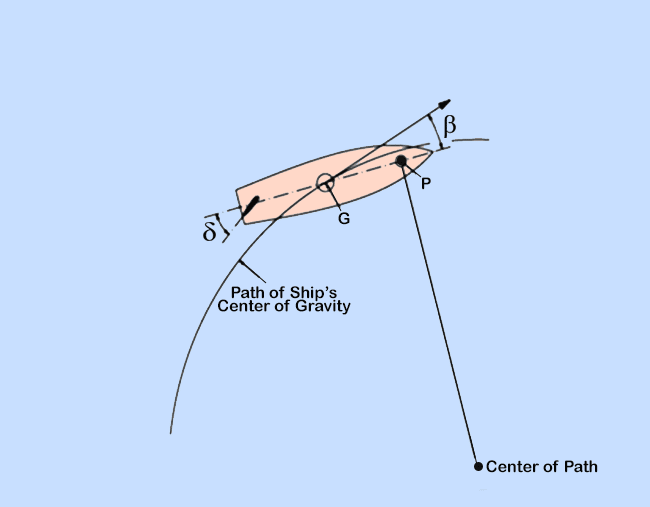 The aim of performing this trial is to test the ship’s overall ‘Turning Ability’ as it comprises an indispensable manoeuvre that a ship has to undergo every now and then. Following are some of the outcomes that are chiefly recorded and assessed while conducting this trial: 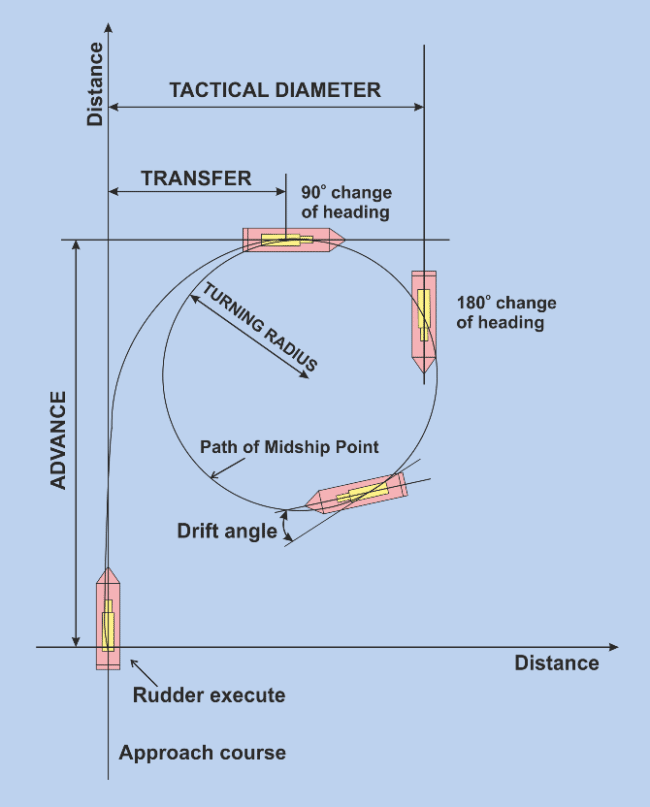 Likewise, lowest possible tactical diameters are sought as everyone would want their ship to be well within the safest limits to avoid collisions and make manoeuvres as briskly as possible!

The same criterion is similar for cars or other road transport where at the design stage the maker ensures minimising the ‘distance to turn’ as much as possible keeping in mind the lack of space and increasing traffic densities on roads.

It should be noted that IMO has its own yardsticks for slating out the maximum allowable limits of turning ability a ship can have, failing which, the entire design is discarded and made to review. These are:

The measures are based on statistical data conducted on earlier vessels and are focussed to ensure that the ship is capable of turning well within the bounds of the situation.

Another big problem that arises while turning a ship is the problem of heel during its turn. All of you must be familiar with the concept of a motorbike tilting sideways while negotiating a curve, thanks to the centrifugal effects interplaying with the self-weight. Similarly, a ship too heels sideward while taking a turn. Sway and Yaw along with the centrifugal forces acting variedly at different instances of turn are to be blamed. As stability is a pressing issue in all ships under all conditions, this effect is unwanted. Also, impacts can be detrimental if heel is not controlled at suitable limits. Hence, allowing the maximum extent of ‘safe’ heel during a turn is also of a big concern.

In our next article, we would be having further insights into other kinds of manoeuvres pertaining to a vessel which are required in different situations. The trials for assessing them would also be highlighted.

What Procedure Does Master Follow For Handing-Over Of Ship’s Command?
Dry Docking of Ships – Understanding Stability And Docking Plan
Shipbuilding Process : Finalising And Launching The Ship

Who is a Ship Superintendent?