You are here: Home › Guidelines › Fuel Oil Consumption Calculations For Ships: What Seafarers Should Know
TwitterFacebookLinkedInPinterestBuffer

Fuel oil consumption calculation and recordkeeping on board ship are one of the most critical tasks that the Chief Engineer is in charge of.

Fuel oil is provided by the charterers of the vessel and the Chief Engineer has to report to them every day with fuel oil consumption report, remaining on-board and requirement for the next voyage.

The applied method for measurement for the ship is briefly described in this article. The description explains the procedure for measuring data and calculating annual values, measurement equipment involved, etc.

Where a flow meter is fitted on a pipeline supplying fuel to an emission source (main engine, diesel generator, auxiliary boiler, etc.), flow meter readings are the principal means of determining fuel consumption.

Flow meter readings and fuel temperatures are to be recorded daily at 1200 hrs (noon) ship’s mean time, as well as at the time of Arrival (as noted in the Arrival report) and Departure (as noted in the Departure report), in the Excel spreadsheet, consisting of all correct calculation formulas.

The formula (Corrected Density = Density at 150C X [1 – {(fuel temp (0C) – 150C) X 0.00065}]) should be used to obtain the corrected density at the recorded fuel temperature. A calculation table has been provided for this purpose in the excel worksheet.

In addition to reporting fuel consumptions every noon and on arrival and departure of the ship, it is also necessary to record flow meter readings at the following events:

Fuel transferred from the fuel oil drain tank or fuel oil overflow tank back to fuel/settling tank is to be noted in Position, Arrival and Departure reports. This amount will be automatically subtracted from the voyage fuel consumption.

For emission sources that are not fitted with Flow meters or when the Flow meters are not operational, bunker fuel tank monitoring on board is to be done.

In this method, tank readings of all fuel tanks relevant to the emission source, using tank soundings/ullages or level gauge readings, are to be noted in the Engine Room Sounding Log. Consumptions are to be recorded in the Excel spreadsheet. 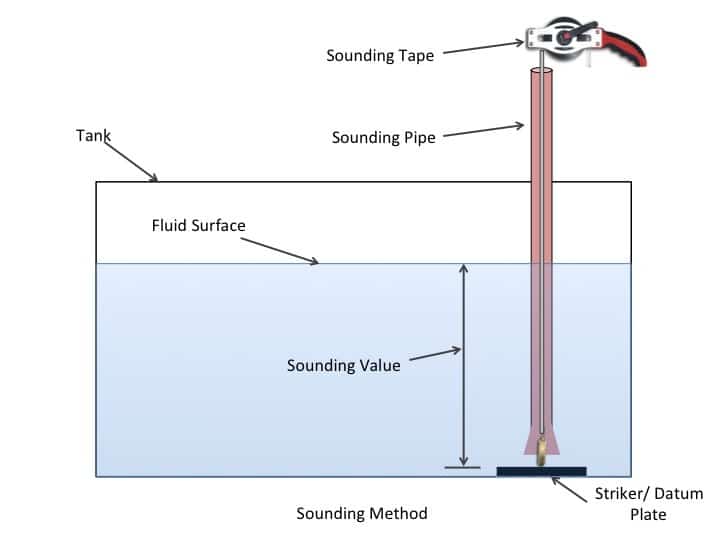 In addition, fuel quantities in all fuel tanks on board ship are to be determined periodically at least as per the following schedule.

Quantities may be determined by use of the fixed gauging system where available or by manual sounding:

Related Read: 20 Points Engineers Onboard Ship Should Consider While Planning For a Long Voyage

Position, Arrival and Departure reports in the company’s reporting infrastructure for ships are the primary means of reporting MRV-related data, including fuel consumption, transport work, and other voyage-related data.

Generally, if the gap is more than 24 hrs the user will not be able to submit the report and will need to submit the missing report (with a gap of less than or equal to 24 hrs.) first. 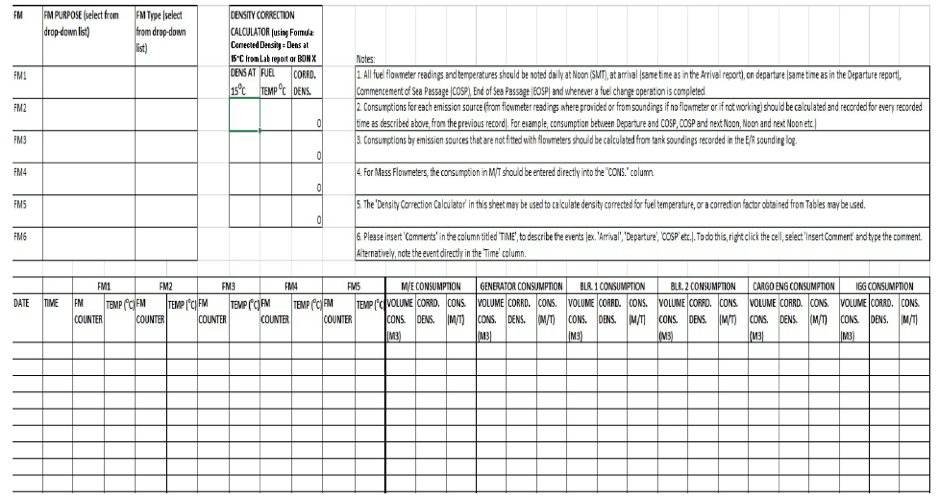 In addition to Position, Arrival and Departure reports, other relevant periodic reports including Noon Reports, Monthly Reports, and Quarterly Reports are to be filled as per the formats in the company’s reporting infrastructure for ships.

The quantity of fuel bunkered, as stated in the Bunker Delivery Note (BDN), is to be checked by gauging all fuel tanks on board, prior and after the completion of Bunkering, applying the appropriate correction factor to density for temperature, and obtaining quantities in Metric Tonnes before and after Bunkering. The ship’s figure of fuel Bunkered is the difference between the fuel quantity before and after Bunkering.

Written records showing the Soundings before and after of all fuel tanks and details of the calculations showing ship’s figure in Metric Tonnes of quantity Bunkered are to be retained on board.

The density of fuel bunkered is to be obtained from the BDN.

The density of co-mingled fuel in tanks is obtained by calculating the weighted average of the density of the fuel remaining in the tanks before bunkering and of the fuel bunkered in each tank.

Related Read: Procedure for Bunkering Operation on a Ship

Density of fuel should be corrected using an appropriate temperature correction factor obtained from ASTM Petroleum Table 54B or equivalent or computer software incorporating these tables or the formula: Corrected density = Density (in air) at 150C X [1- {(T0C – 150C) X 0.00065}], where T0C is the temperature of the fuel in degrees Celsius.

In case of bunkering from the barge, all tanks on the barge are to be sounded before and after Bunkering by a responsible officer. Barge tanks are also to be checked for the presence of free water. A written record is to be made of the results of these soundings and free water checks.

The Chief Engineer is responsible for checking the fuel quantity bunkered.

Fuel quantity (in Tonnes) in all bunkered tanks is to be re-checked 24 hours after completion of bunkering or just prior to commencing use of the newly bunkered fuel (if it is to be used within 24 hrs of bunkering) to account for possible settling of fuel due to air injection while bunkering.

Related Read: Malpractices In Bunkering Operations Seafarers Should Be Aware Of

Distances that may be travelled between Arrival and Departure reports (such as, during transit from Anchorage to Berth or when shifting between terminals within a Port) are not required to be reported in Voyage reports but should be noted in the Deck Log Book.

Related Read: Why Nautical Mile and Knot Are The Units Used at Sea?

Fuel flow meters, fixed tank gauging devices and temperature measuring devices/gauges are to be checked and calibrated for accuracy at intervals as recommended by the manufacturer / as stated in the PMS. Certificates of calibration are to be issued post these checks and retained on board.

The validity of calibration certificates will be checked during the annual internal audit.

Related Read: 20 Ways for Seafarers to Reduce Their Carbon Footprint on Ships

From 2019, every ship above 5000 gross tonnages has to collect certain information about the ship and its fuel and submit to IMO. This includes Ship Particulars, the period of the calendar year for which the data is being submitted, fuel oil consumption in metric tonnes, fuel oil type and methods used for collecting fuel oil consumption data, distance travelled and hours underway.

This data provided by the ship will help them to summarize the fuel oil consumptions of all the ships and will be used to research and find out ways to reduce emissions and pollution.

3 Important Calculations Every Marine Engineer Must Know On Ships
What is Extended Dry-Docking of Ships?

Entries To Be Made in Ship’s Engine Room Logbook