We have discussed about the importance of the bulb shaped structure at the ship’s bow called the bulbous bow in our previous article. These huge protruding structures are so designed and fitted to reduce the drag and wave making resistance on a seagoing vessel.

It is reported that large ships with conventional clipper bows can have 12-15% more fuel efficiency when coupled with a bulbous bow. Moreover, seakeeping characteristics have also improved inclusion of bulbous bow in the design (reduction in pitching, improved buoyancy of the fore part). 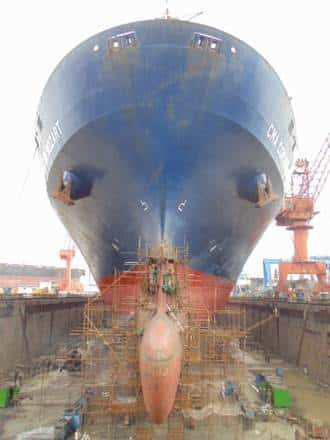 However, there are certain conditions that determine whether a bulbous bow would improve the fuel efficiency.

When a ship sails, it generates waves by imparting energy to the water particles around it. There are layers of fluid around the ship’s body and certain parts of the ship are responsible for this ‘system’ of waves generated as a result of the abrupt curvature at the ship’s stem, owing to the rise in pressure. This is because the ship is not stationary and the motion across the viscous fluid layers creates differences in pressure at various points – some regions of positive pressure and some negative, ultimately giving rise to two wave systems, broadly, the transverse and the divergent wave systems.

Now, when a bulbous bow is included in the ship’s design, the waves are generated in front of the bow. For a ship without a bulbous bow, the waves would have formed at the stem and the ship will have to overcome these wave crests which become higher with increasing speed. The bulbous bow waves form slightly forward of these crests. If at a certain speed the trough of this system almost coincides with the crest of the normal bow wave, the bulbous bow is successful in achieving its aim. 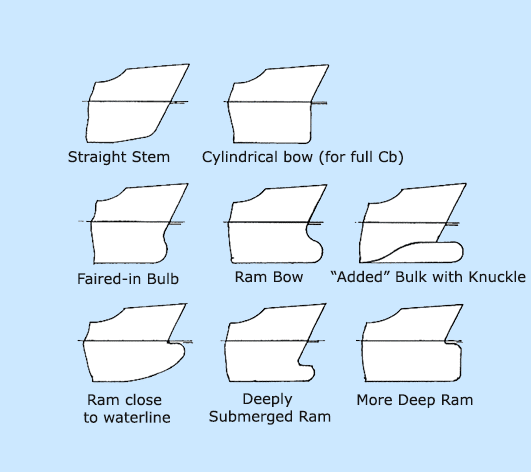 The phenomenon in action where the steep waves at the bow are cancelled is called destructive interference; a wave phenomenon involving the interference of waves in opposite phase. This is how the vessel with a bulbous bow running at optimal speed is able to keep the water at the fore end relatively calm as opposed to a normal clipper bow.

Three main hull parameters are of importance here – block coefficient, length/beam ratio and the beam/draft ratio. The block coefficients vary over a large range and so design charts are available for the same. 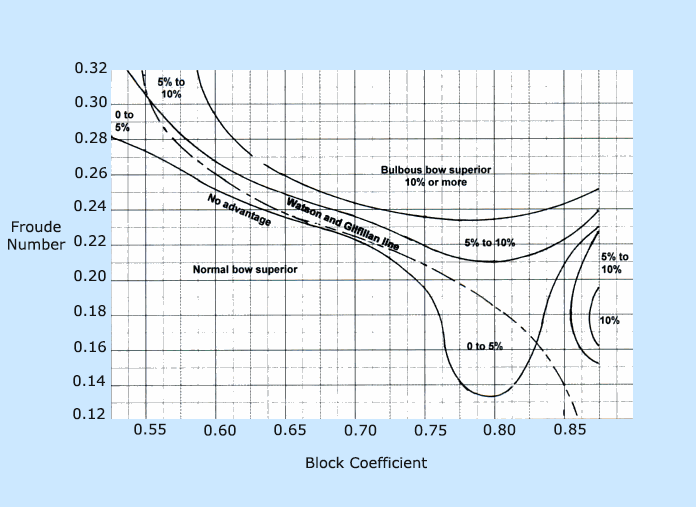 The combination of Froude number/Block Coefficient at which a bulbous bow will be of any advantage. (Reference: Practical Ship Design by D.G.M. Watson)

The graph shown above is used to decide whether a bulb would be able to bring down the overall resistance of a vessel or not. The Watson and Gilfillan line on this plot is an indication for the same and superimposition of this line on the various observations in the plot give us some idea. First, the vessels having finer forms (CB < 0.6) and operating at higher speeds (Froude Number, Fn >0.3) will benefit from the addition of a bulb. So will ships having much fuller forms (0.725 < CB < 0.825). However, bulbous bows can offer advantages on ships of all block coefficients provided they are ‘over-driven’ and are not too ‘fine’ for the speed at which they operate (Remember the length/beam ratios?).

Bulbous bows come in a range of shapes and sizes tailoring to the needs of the parent vessel. However, a broad classification refers to whether a bulb has been ‘faired’ with respect to the hull or there exists a steep curvature with respect to the stem line, which is the case with an ‘added’ bulb. The ‘added’ bulb is easier to manufacture and integrate. It also provides good results when compared to a ‘faired’ bulb.

Some of the physical modifications in nose jobs are optimisation of the bulb’s volume, centre of volume extended vertically along with longitudinal extension. Basically the bulb shape is modified into what is called a ‘reverse pear-shaped’ section and this works well for working drafts below design drafts. The waterlines of the bulb nose are required to be streamlined but not circular to avoid the possible separation of water flow around it.

Today, research is being done on using polymer or thermosetting plastics for the highly complex bulb designs since a ship’s bulb is not exposed to high heat in normal working conditions and such materials are easier to work with than steel.

Slow steaming is a strategy which is used by several shipping companies to improve fuel efficiency. The basic principle here is to operate the ships at a fraction of their rated working power with a certain reduction in speed to achieve savings in the exceptionally high fuel expenses. These savings are capable of offsetting the reduction in propulsive efficiency.

Then, there came certain provisions to accommodate the slow steaming strategy such as redesign of propellers, introduction of slow steaming kits and ship nose jobs, particularly in container vessels. Sometimes, removing the bulbous of a vessel and reverting to the good old clipper bow is also a feasible option. 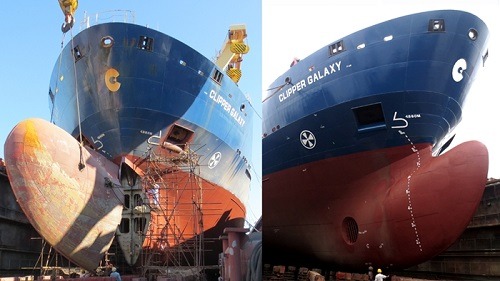 Now when nose jobs were being considered a viable option, a shipping market, where time means money, immediately latched onto it- the container shipping industry. Since ship nose jobs can involve replacing the bulbous bows of ships for better performance in slow steaming environments, today container shipping companies such as Maersk Line are leading from the front in replacing the ‘nose’ of their vessels. Almost a dozen ‘nose jobs’ have been done by now which claim to have gained fuel savings of around 5% which is huge for the size of container vessels in use. Even the payback period for the expenditure behind a ‘nose-job’ is estimated to be less than a year.

While there are benefits with modified ship bulbous bows providing fuel savings, there are other advantages too. Ship nose jobs have been verified to have reduced CO2 emissions by around 23% (NYK Group) over a period of 6 months, eventually leading to savings in bunker consumption.

A naval architect may design a vessel for a certain design speed. But, it would not hurt to do some market research and find out the operating speed and engine operating ratings for such vessels so that the bow operation and other elements of the design can accommodate itself (for optimal efficiency) within the current shipping trends.

Do you know other methods to achieve higher propulsive efficiencies at lower engine ratings?