Centuries ago when the aboriginal adventurists ventured into the sea in their primitive rafts to experience the thrill of moving across the waters, it didn’t take them much time to understand the hazards bounded with the feat.

Disasters happened, their boats crumbled, capsized, sank, losing lives. Using trial and error as their implements those craftsmen gradually developed expertise. Since the advent of 18th century mathematical and scientific approach has been taken in order to estimate and anticipate the hazards beforehand.

It is necessary to ensure that if any mishaps happen such as fire, flooding, explosion, structural damage, the ship can sustain a substantial level of damage and enough time is there to prevent any immediate catastrophe and steps can be taken to mitigate the consequences and render counter-actions available.

The term damage stability deals with the ability of a ship to float in water and regain its upright equilibrium position when some sort of structural damage has occurred. Generally, following an accident, the damage is hull fracture leading to flooding of ship compartments.

If so many compartments are flooded that there is not enough buoyancy available to keep the vessel afloat, the ship may sink. Another critical scenario due to hull breach is ship capsizing due to loss of transverse stability as it can happen very quickly. The disasters of the Herald of free enterprise and Estonia are few such instances. 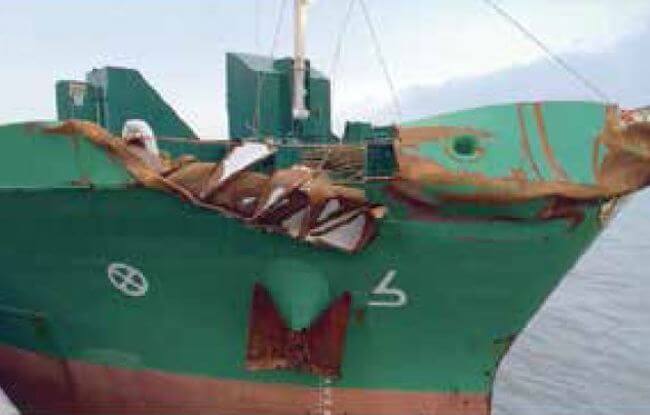 How do ships get damaged?

Surface ship damages were havoc to the economy of the nation due to their high cost. This made the naval architects study the factors that contribute to shipping damage in the sea. Some are enlisted below

• Quantification of the behaviour of the ship when damaged in case of a failure or accident.
• Design aspects to prevent or restrict the havoc caused by the failure.

To assess the behaviour of a ship after some damage two methods are considered:

This is a traditional method of assessment of the stability of a ship when it is flooded. In this process, the ship is divided into several subdivisions along its length with the help of transverse watertight bulkheads. Now the stability of the ship is calculated when one or more compartments get flooded due to a breach of hull.

The changes in draft and stability when a compartment becomes flooded due to damage can be investigated by either of two methods:

Both methods will give identical answers for final draughts, trim and righting moments, despite different values for GM. However, IMO/SOLAS recommends the use of Lost buoyancy method for all calculations.

As we discussed, in deterministic approach the hull is internally subdivided to increase the factor of safety of the vessel in case of hull damage. Now, this subdivision is not arbitrary. It takes a lot of study and analysis balancing both economic and safety needs of the vessel before the designer fixes the subdivision of the vessel. In this approach, the length of this compartment is to be calculated such that if this compartment is flooded, the ship will sink to a point where margin line is just submerged. This is the floodable length at a point along the length of the ship. The subdivisions accordingly resist flooding in damaged conditions to the safest limits. Floodable Length is an important parameter that is taken into account here. It is defined as the maximum length of the compartment that can be flooded such that the draft of the ship remains below the margin line. Thus, the maximum division of bulkheads is the best solution. But, other factors such as minimum required size of hold, improper cargo stowage, and the number of required outfitting or increased steel weight hinders the possibility to some extent. Thus, optimizing the safe limits of floodable length to the minimum required length of the watertight compartment is done in most cases.

This article is authored by Soumya Sameer and was originally published at the inaugural issue of Navisieger. Navisieger is a magazine published by Learn Ship Design. It is a confluence of insights on the maritime technology sector taken from academic experts, naval architects, industry veterans in this field, in the form of articles and exclusive interviews. Learn Ship Design is the first student initiative in India that works towards enhancing industry-academia engagements in the maritime sector.

Different Types Of Ice Loads On Ships
Want to share your tips and advice? Got questions? Visit the community forum to ask questions, get answers, meet people, and share your tips!