You are here: Home › Marine Safety › What is Parametric Rolling in Container Ships?
TwitterFacebookLinkedInPinterestBuffer

Rolling and pitching is a part of every ship that is going out at the sea. The first thing you might think upon hearing the word “Parametric rolling” is that it must be a type of rolling movement occurring in ships.

Rolling and Pitching is a normal movement phenomenon that occurs in all kinds of ships, so what is new about this?

The difference is that “Parametric Rolling” is a type of movement that is experienced only on Container Ships. 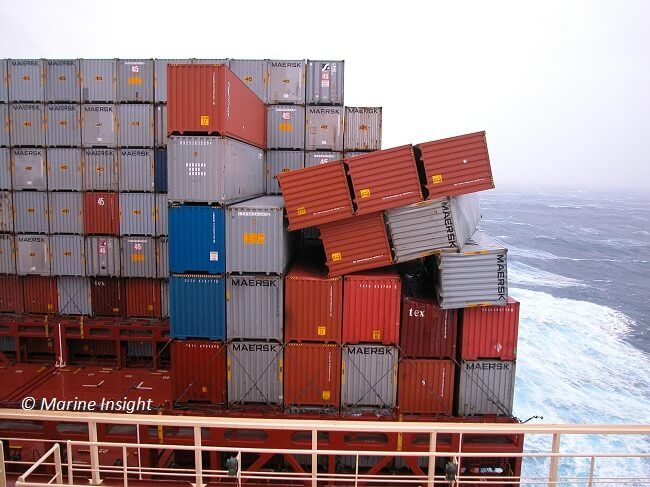 The size of container ships is increasing drastically as companies are looking forward to monster ships; for e.g. Maersk’s Triple-E Vessels. The new container ships coming to the market have a large bow flare and wide beams to decrease the frictional resistance which is generated when the ship fore-end passes through the water, making it streamlined with the hull.

As the wave crest travels along the hull, it results in flare immersion in the wave crest and the bow comes down. The stability (GM ) varies as a result of the pitching and rolling of the ship. The combination of buoyancy and wave excitation forces push the ship to the other side.

A similar action takes place as the bow goes down in the next wave cycle resulting in synchronous motion which leads to heavy rolling up to 30 degrees in a few cycles. This type of rolling is known as Parametric rolling.

This phenomenon occurs only when the sea condition is in the head/stern or anywhere near to them. There are two pitch cycles- maximum and minimum.

The period of the roll is half the natural rolling period which coincides with a large phase angle and maximum roll always occurs when the ship is pitching down i.e. bow is down.

What to do in case of Parametric Rolling on ships?

Titus- An Innovative Rescue System
Want to share your tips and advice? Got questions? Visit the community forum to ask questions, get answers, meet people, and share your tips!