You are here: Home › Naval Architecture › What Is The Purpose Of “Torsion Box” In Ships?
TwitterFacebookLinkedInPinterestBuffer

However, the increase in the size of the ship and its containers has also given rise to large deck openings, which calls for global maritime investigation into the structure of the hull girder and its effect under torsional and wave bending loads.

Torsion in ships is caused due to forces which do not pass through the sheer centre line axis of a ship’s hull cross section. Torsion basically tends to twist the vessel just like how we rinse a cloth by twisting it.

Other forms of torsional moments arise from the vibration of propeller shaft, vibrations due to twin screw propellers etc. As the name suggests, wave induced torsion is caused due to the unsymmetrical hydrodynamic wave loading on the port and the starboard sides of the vessel. Similarly, still water loading is caused due to the unsymmetrical cargo loading over port and starboard with the ship remaining upright.

A ship heading obliquely to a wave will be subjected to righting moments of opposite direction at its ends, twisting the hull and putting it in ‘torsion’. In most ships these torsional moments and stresses are negligible but in ships such as large container ships with extremely wide and long deck openings they are significant. 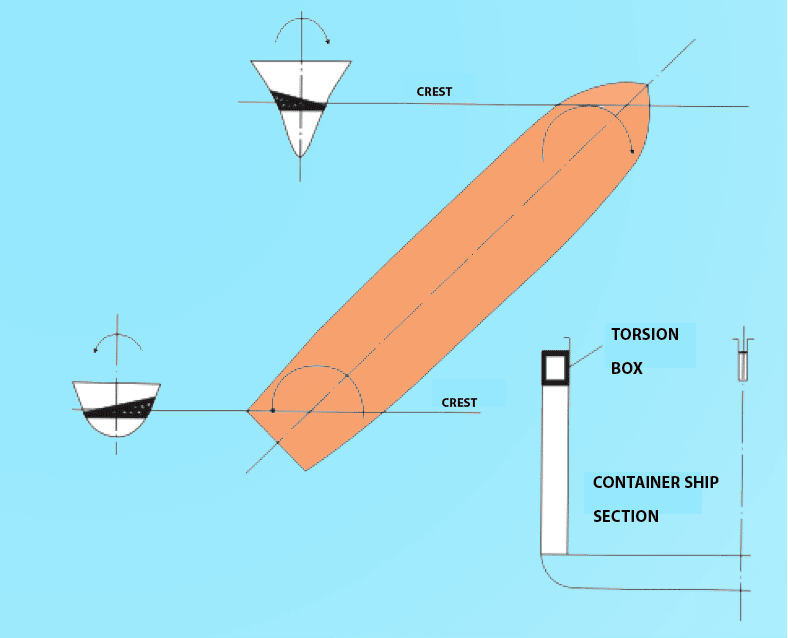 Ships are designed to withstand the maximum torsional loads due to either static or dynamic or both the torsional moments together. However, in some cases where there are large deck openings; it becomes difficult to strengthen the vessel only with the help of hull girder and stiffeners. This leads to the concept of torsion box.

The strengthening aspect of the torsion box can be easily understood by the example of a bucket.

It is commonly observed that the plastic or steel bucket which we use for house-hold purpose has a curl to its periphery. This curl is similar to the torsion box used in ships. If you remove the curl from the periphery of the bucket you will observe that the strength of the bucket decreases rapidly (mostly in case of plastic), i.e. it can be bend easily with very small forces about its edge. However, with the curl-on its strength increases to a very large extent! But how does this curl or in our case the torsion box helps in increasing the strength to a very large extent?

Torsion box in ships can be defined as a continuous structure formed in between the top part of a longitudinal bulkhead, freeboard deck and sheer strake. It runs from the collision bulkhead and extends up to the aft peak bulkhead. It is heavily stiffened usually by bulb angles which provide sufficient strength against torsional moments and other bending loads.

Research and FEM analysis of thin-walled beam, taking into considerations the effects of shear and warping, is applied for computation of bending-torsion, coupling and vibration characteristics of ships with large openings. The contribution of torsion box towards the torsion rigidity is deduced. 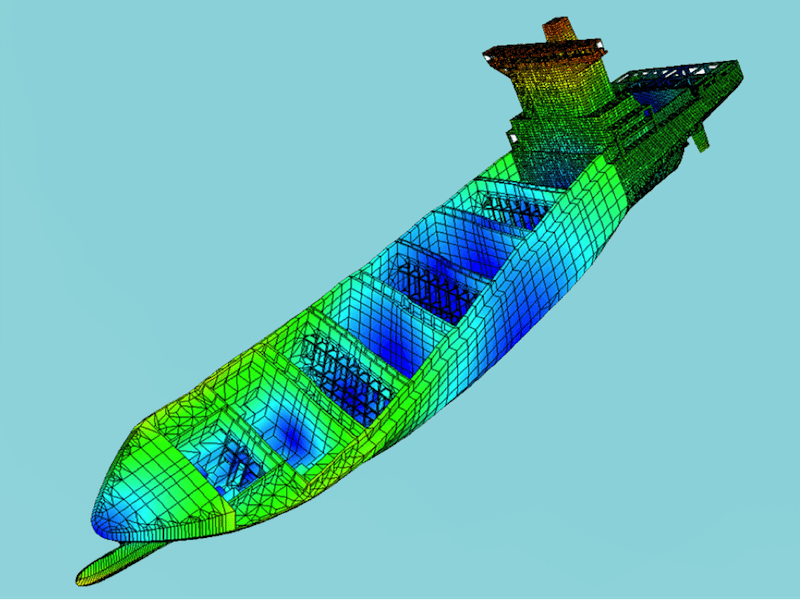 Container ships are highly subjected to torsional moments because of their very large hatch openings. This leads to even higher warping stresses at the corners of the openings due to lack of torsional rigidity. The upper part of the double hull in such ships is fitted with torsion box as mentioned earlier. However, it is not always possible to have the large cross-sectional area, and therefore, the Naval Architect has to increase the thickness of the plate in order to provide torsional rigidity.

The marginal distance between the hatch end and the side shell is approximately 1.5 ft. This is done so as to maximise the space for the stowing of containers. It is often seen that the main deck is subjected to high torsional moments and racking effects and the deck spacing in the way of the hatch opening along the transverse is very less. As a result, the stress concentration can lead to cracking at the corners of the hatches or crack the deck itself!

In order to prevent such failures, torsion boxes are fitted with welded joints on the side shell as on the deck plating which prevent the torsion produced by twisting. 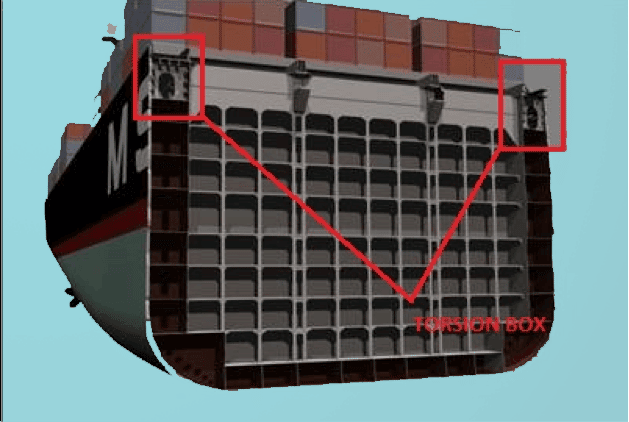 • It helps in preventing torsional bending on ships due to the torsional moment on ship caused by dynamic movement of the waves.

• Helps in avoiding racking effect caused by the sheer stress on the vessel structure. Therefore, while designing ships with large openings (like container ships) it is often ensured that proper FEM analysis and model testing procedures are carried out. Proper strength analysis of the hull and deck plating should be done.

At points of stress concentration i.e., at the corners of the hatch openings, sufficient stiffening should be provided and at times the thickness of the deck plating can also be altered without causing any structural discontinuity.

Do you know more points on torsion box that can be added to this article?

Different Types And Designs of Hatch Covers Used For Ships