As we all are aware, a special type of ships is used for icy water regions. A general name, which is commonly used for such ships is “Icebreakers”.

However, not all ice-plying vessels are icebreakers, some are termed as ‘ice-class’ or ‘polar-class’ vessels.

Let’s have a brief insight into the technicalities of this type of vessels and also delve into their subtle differences and similarities.

Icebreakers are special-purpose vessels designated for breaking ice floes, sheets, and piles in cold climates where the water is mainly icy.

They may be suited explicitly for icebreaking operations or for other special purposes.

On the other hand, ice-class ships are usually general-purpose design ships with an additional level of strengthening and arrangements for navigation and sustenance in ice.

The rules and guidelines incorporated for the construction and construed for classification are known as the “Ice Class” Rules.

But before delving deeper into the technical and construction aspects of these ships, let us briefly have an insight into the ice environment and the physics of the behaviour of ice with such vessels.

Though during wintry months, many of the sea routes in the temperate and frigid zones get laden with ice cover, a lion’ share of ice cover is concentrated in the polar regions, i.e. the Arctic and the Antarctic.

As per a recent study data, the ice cover extents of the Arctic and Antarctic are 5.1*106 km2  and 18.2 km2 respectively. Due to Global Warming and climate change, this ice cover extents are gradually dwindling.

Apart from the ubiquitous problems of flooding, loss of vegetation or drastic climate change, this issue poses other problems as well. The broken ice floats farther as icebergs, sheets or floes and has a crucial effect on the navigational traffic of related seas. Worth mentioning, accidents as well due to collision damage with icebergs or icecaps. Remember Titanic?

Thus, the implications of icing have an indispensable presence in the guidelines and regulations of designated vessels for such areas. But first, let us have a brief and simple discussion related to ship-ice interaction.

Ice, as we know can be of various types such as floes, sheets, bergs or brash ice. Moreover, they differ in their physics, behaviour, strength, and stability. This consequently can have a varied impact on their interaction with vessels and other structures.

To sum up, broadly there can be the following types of ice commonly found in the sea:

Other types do exist, but these are mainly considered in the interest of ice-plying vessels and are related to these principal types only in some way or the other.

Frazil ice is like ice flakes or needles suspended in water. They have an insignificant effect on vessels but may be considered for resistance and abrasive effects onto the hull.

Brash ice is in the form of loosened fragments, basically, like a wreckage of bigger forms of floating ice lesser than 3 metres thick and 2-metre diameter.

Floes are basically flat pieces of ice sheets spread over a vast expanse with small variations in thickness. They too are larger break-offs from pack ice.

Cake ice, as depicted from the name are circular pieces of ice with a certain thickness welling up from the mean sea level.

Fast ice is harder forms of ice, which generally remain attached to the shore or ice wall. They are often dictated by surrounding sea level and may replenish themselves over years.

The age of ice is a foremost factor. Here too, they may be classified into  following main kinds of heads:

New ice is formed as a result of the recent freezing of seawater. They have less thickness (up to 10 cm) and do not pose hazardous ice loads on ships. But they are never to be neglected in ice-class designs. They include frazil ice, brash ice or cakes.

Young ice is slightly harder and thicker (10 cm-30 cm). If they survive up to one year, they may thicken into First Year Ice.

If a pack of ice survives multiple melting seasons, they may accrue into a harder form. This is the multi-year ice. Another factor is the size of ice. The expanse of an ice cover varies from sporadic free-floating pieces to large packs and ridges.

Ridges are said to be the thickest sea ice features and account for half of the total ice volume. They are mount-like features formed as a result of continued stress, convergence and collision between two successive ice covers.

Nonetheless, all forms of ice pose threat in varying degrees to vessels plying on icy waters and needs to be taken care of.  So, in the design regulations of these vessels, several factors are taken into consideration, such as:

Related Read: How the Ice Melting in the Arctic has Affected the Shipping Industry?

When we consider ships plying in icy waters, we consider various implications of the weather conditions persisting in that region. This may be divided as:

Related Read: What to Do When the Ship is Moving towards Sub Zero Temperature Area?

Prior to speculating these aspects, let us first look into the fundamentals of ice loads.

What are ice loads on ships?

Like traditional hydrostatic and hydrodynamic loads, the ice too poses high modulus of forces onto the hull as obvious. Moreover, ice being in a solid-state and having varied sizes and features can cause damage to the hull if unattended. So, vessels plying in icy regions have different build specifications taken into account.

Now, think of this? When a ship encounters ice, any or a combination of the following may occur:

Related Read: What To Do When A Ship Is “Beset”?

As the age, formation, and size of ice in a particular geographic region are multi-variant, the vessel must be structurally and functionally capable of withstanding all plausible types of ice conditions. Apart from the main hull, the propeller and rudder along with appendages (if any) must be capable of enduring ice interactions without compromising the required design performance of the vessel.

Continuing our discussion with icing loads, we can look into 3 crucial aspects of ice loads. They are:

While the encountered ice conditions deal with the physical properties, distributions, occurrences, and variations of ice, the statistics include dealing with statistical data of climates and icing.

Mechanics is the end result of these as they directly dictate the extent of design philosophies incorporated into a vessel enduring such conditions. 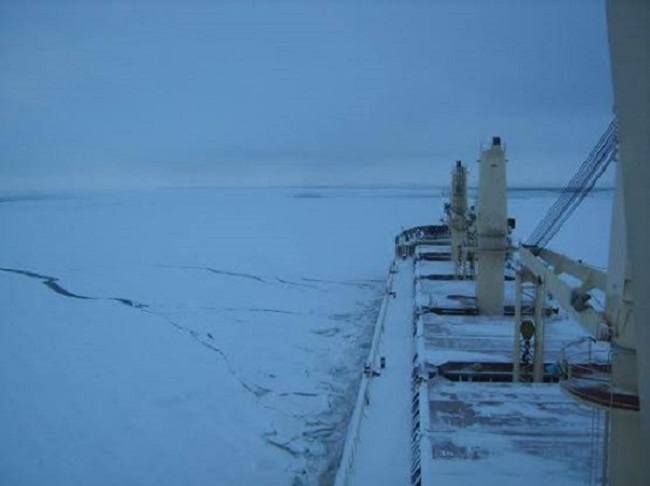 Now, when we contemplate about vessels plying in ice, the most crucial thing that logically comes to the mind is the need for strengthening. This is obviously true.

Classification regulations for strength are incorporated in all sorts of such vessels in varying degrees. From the design point of view, some other alterations are also made depending on the type of vessel and its utility.

In the next article, we will continue our discussion with these aspects as well as ideas on classification for ice.