Imagine yourself to be one of the first passengers of the Royal Caribbean International – ‘Quantum of the Seas’. As soon as you enter the ship you hear the Master requesting all the passengers & crew members to fasten their seat belts and remain in their respective rooms until the voyage is complete!

Definitely, this is something no passenger would like to hear who has spent a fortune to enjoy the excellent facilities, food and exceptional beauty of such a marvellous ship.

However, this could become a reality if the ship had not been equipped with machinery or is designed in a way to overcome all the various types of motions felt at the seas.

Why take only cruise ships and ocean liners, think about the cargo-carrying ships such as Bulk carriers, Ro-Ro ships or even Tankers & LNG carriers. Just imagine how difficult would it be to carry the cargo (liquid or bulk) safely if we did not have any technology to control the various motions during the voyage.

In this article, we shall be focusing on how we can control the ‘Rolling motion’ of the ship and the various principles behind the different types of Roll Stabilization systems.

Rolling is indeed the biggest problems among all the other motion in seas. Technological advancements in the design of ships have already given us naval architects the advantage to study the wave motions around the hull of the ship and give the best possible design to minimize such effects & ensure a comfortable and safe voyage for the passengers and the crew.

Roll motion stabilization can be achieved in conventional ships by changing their hull forms, however, reduction in roll amplitudes are possible by other means as well. Stabilization systems can be broadly classified into –

Bilge Keels are the most popular and fitted to the great majority of ships. They are plates projecting from the turn of the bilge and extending over the middle half to two-thirds of the ship’s length.

To avoid the damage they do not normally protrude beyond the ship’s side or keel lines, but they need to penetrate the boundary layer around the hull.

They cause a body of water to move with the ship and create turbulence thus dampening the motion and causing an increase in period and reduction in amplitude.

Although relatively small in dimension, they have large levers about the rolling axis and the forces on them produce a large moment opposing the rolling.

Their effect is generally enhanced by ahead speed. They are aligned with the flow of water past the hull in still water to reduce their drag in that state. When the ship is rolling the drag will increase and slow the ship a little. 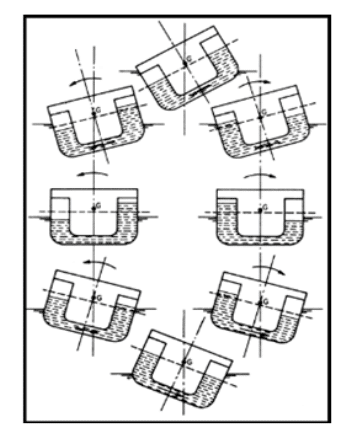 They are similar to the principle of passive tank system but the movement of water is controlled by pumps or by the air pressure above the water surface. The tanks either side of the ship may be connected by a lower limb or two separate tanks can be used.

The air duct contains valves operated by a roll-sensing device. This concept uses an axial flow pump to force the water in the tank from one side of the ship to the other, rather than to have it slosh under the natural roll, sway and yaw forces, as happens in a passive tank. 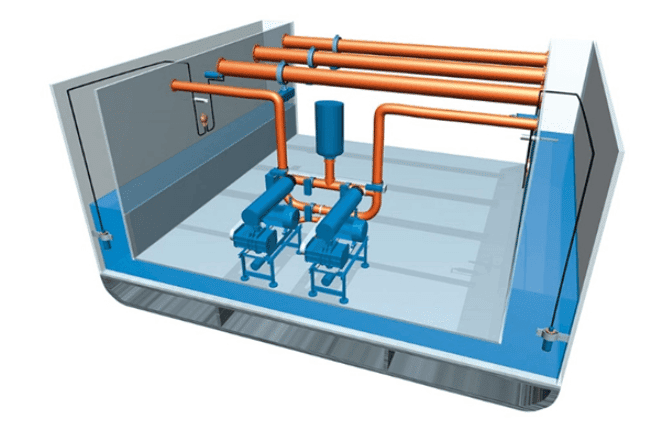 In a simplified version of an active system, an accelerometer senses the rolling motions, and signals are sent from this roll-sensing device to a variable pitch pump, which controls the liquid flow between the tanks.

The device can be either a simple accelerometer or a complicated gyroscopic sensing system that detects even a small angle of the roll by the gyroscopic precession.

Thus, the device can be used to control ship motion due to every single wave. Depending on the sophistication of the system active tank stabilizers have been found to leave an efficiency of 80% or more in motion stabilization.

With active fins, a sensitive gyro system senses the rolling motion of the ship and sends a signal to the actuating system which, in turn, causes the fins to move in a direction such as to cause forces opposing the roll. The actuating gear is usually electrohydraulic.

The fins, which may be capable of retraction into the hull, are placed about the turn of bilge in order to secure maximum leverage for the forces acting upon them.

A flap from the trailing edge may be used to enhance the lift force generated. The capacity of a fin system is usually expressed in terms of the steady angle of heel it can cause with the ship moving ahead in still water at a given speed.

The force on a fin varies in proportion to the square of the ship speed, whereas the GZ curve for the ship is independent of speed. However, a fin system is not likely to be very effective at speeds below about 10 knots. 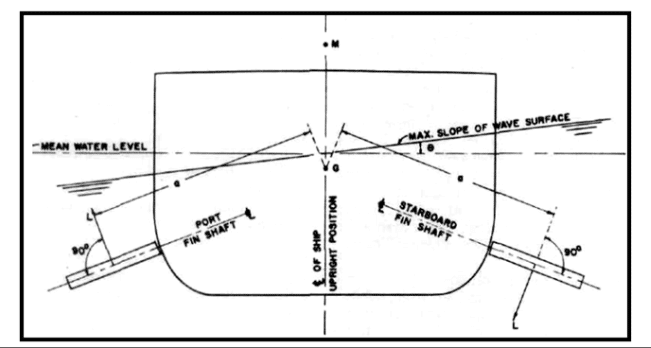 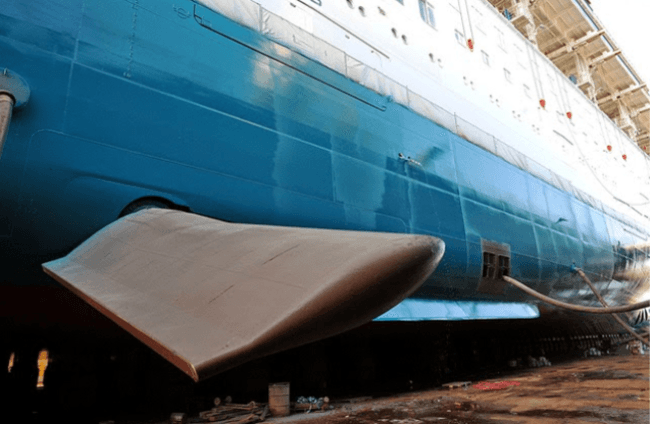 The following table highlights some of the major aspects among the Roll Stabilizers as discussed above:

From the above observation, it can be concluded that each and every stabilization system has got its own advantages & disadvantages. Therefore, more amount of effort has to be given to the hydrostatics and the hydrodynamics of the ship hull motion through the waves, so as to avoid the need for kind of roll stabilization system or to use it to its minimum.

Do you know about any other type of Roll Stabilisation Systems Used For Ships?

Importance Of Ship’s Keel and Types Of Keel

Ship Construction: Plate Machining, Assembly of Hull Units And Block Erection
Want to share your tips and advice? Got questions? Visit the community forum to ask questions, get answers, meet people, and share your tips!