You are here: Home › Marine Technology › An Overview Of Sludge And Bilge Management Onboard Ships
TwitterFacebookLinkedInPinterestBuffer

The operation of the main engine, various types of auxiliary machinery, and handling of fuel oil results into the production of sludge on board ships. This sludge is stored in various engine room tanks and is discharged to shore facility or incinerated onboard. Also, various leakages from seawater and freshwater pumps, leakages from coolers, etc. generates bilges.

In this article, we will see from where sludge and bilge are generated, how they are stored in engine room tanks, what record keeping is done, and how sludge and bilges are incinerated, evaporated, or discharged.

Sludge on board ship comes from various sources like:

The lube oil purifiers have a designated discharge interval depending on the quality of lube oil and the running hours of Main engine and Auxiliary generators. After every set interval the bowl of the purifier discharges sludge accumulated, into the sludge tank or designated lube oil purifier sludge tank. This sludge contains oily water and impurities which has been separated from the lube oil by the purifiers.

Related Read: Everything You Ever Wanted to Know About Scavenge Fires

5. Save all tray drains of oil machinery

All fuel oil machinery i.e. pumps, filters, purifiers, etc. have the tray under them to collect any leakage if occurs. The drain of the tray goes into sludge tanks. 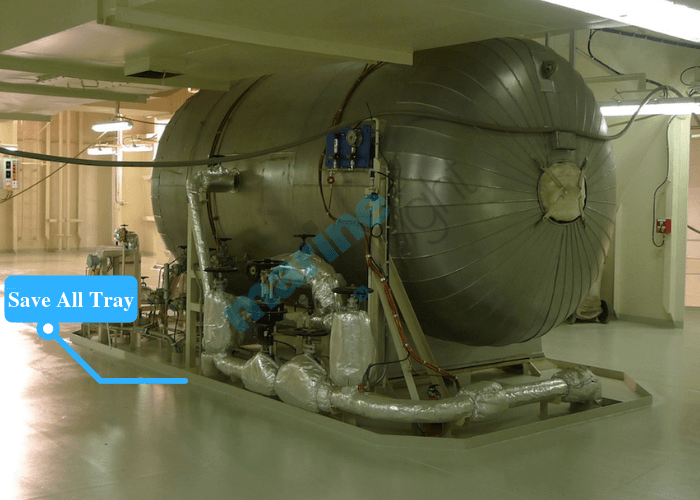 They are other drains going into the sludge tank, for example, air bottle drains, fuel oil settling and service tank drains, etc. All these drains are oily water and are collected in sludge tanks.

Related Read:  A Comprehensive List of Fuel, Diesel and Lube Oil Tanks on a Ship

The number of sludge tanks varies from ship to ship, it depends on from which shipyard ship is built and also depends on the machinery in the engine room. Some ships have one common sludge tank and some have individual sludge tanks. Sludge pump is used to make internal transfers and transfer to shore reception facility. All sludge tanks have to be in compliance with flag state oil record book and every transfer has to be recorded in oil record book. All designated sludge tanks and bilge tanks have to be mentioned in International Oil Pollution Prevention (IOPP) certificate. Any transfer from or into IOPP tanks has to be recorded in Oil Record Book for the Engine room by the Chief Engineer.

The sludge generated have some water content in them coming from HFO & LO purifiers, from HFO settling and service tank drains, Air bottle drains. This water can be evaporated in the waste oil tank. Sludge is transferred from various sludge tanks into waste oil tank for incineration. Before incineration, all the water has to be evaporated so that sludge can be burned efficiently in the incinerator.

Sludge is transferred from HFO purifier sludge tank, LO purifier sludge tank and Oily bilge sludge tank into the Waste oil tank and steam valves (inlet and return) are kept open for water evaporation. The tank temperature reaches 100 degrees Celsius and water starts evaporating, when the temperature goes above 100 degrees Celsius it indicates that the water has been evaporated and oil has started to heat up. Now the sludge is ready for incineration. The quantity of water evaporated has to be recorded in the oil record book. 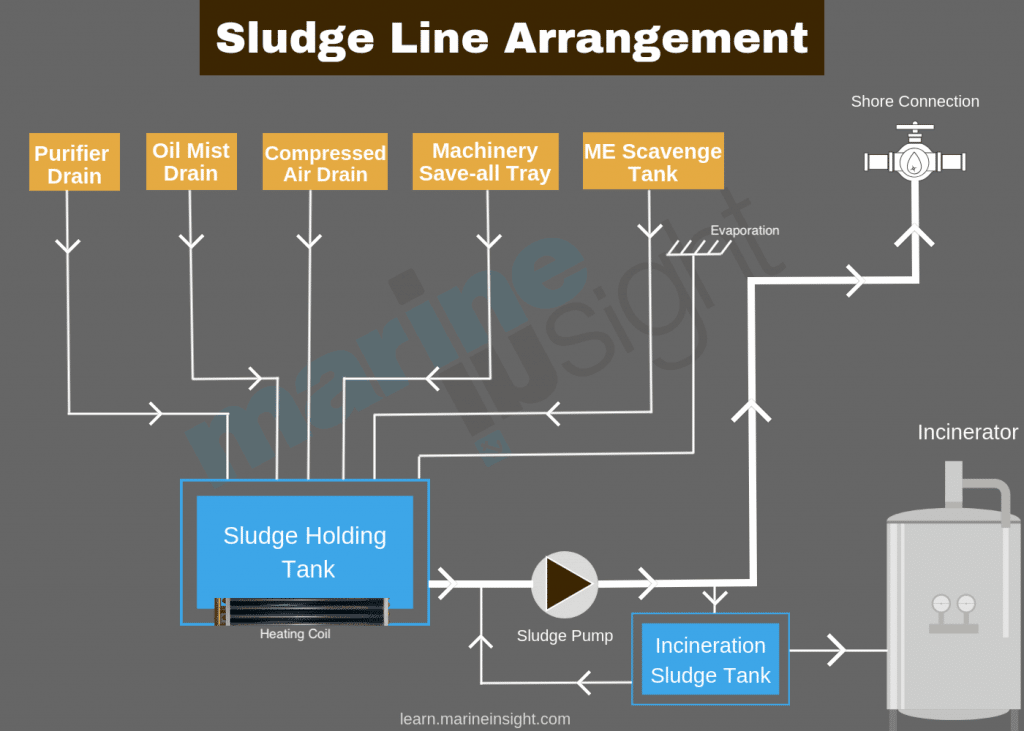 All the leakages in the engine room bottom platform are collected in these bilge wells and can be transferred to the bilge holding tank via the oily bilge pump. The oily bilge pump may also pump these spaces to the sludge tank (via the sludge pump bypass line) and the deck connections for discharge to shore or barge.

The bilge tanks in the engine room are:

Bilge is transferred here to separate oil by gravity. Any oil layer formed on the top can be removed

Present on some ships in which bilge can be transferred and evaporated by heating.

All the moisture from Main Engine scavenge air coolers and generator scavenge air cooler is drained in this tank. They might have some oil as engine room air may contain oil vapour. Hence they are discharged overboard via PPM monitor. 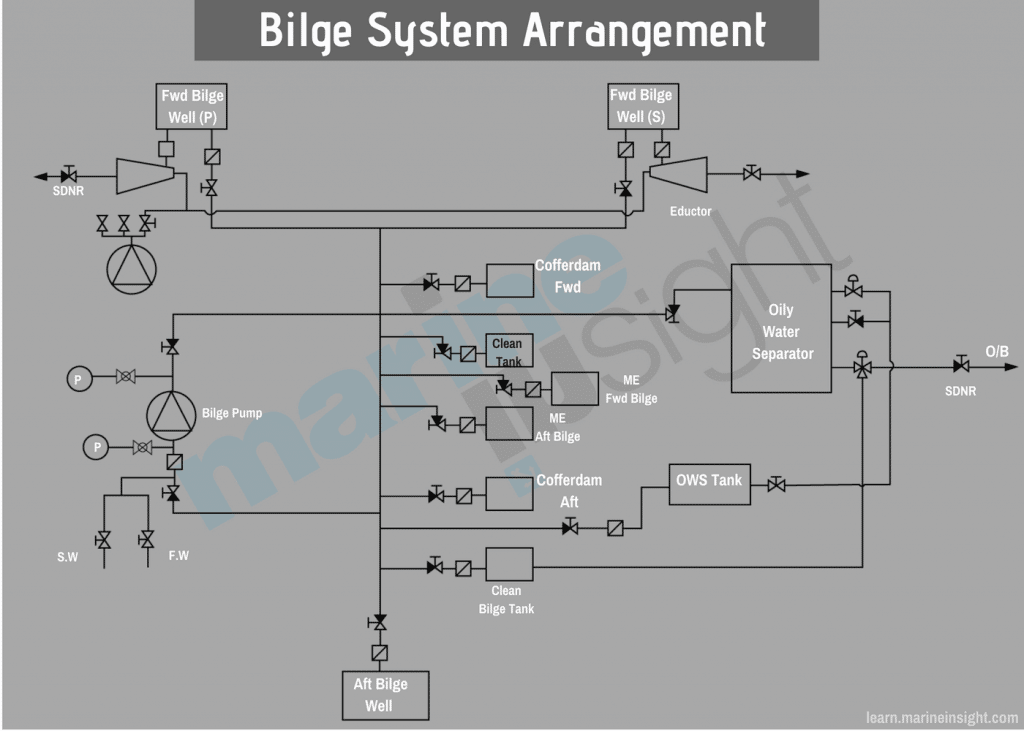 Atmospheric air contains moisture and when this air is compressed in the turbocharger and then cooled in the air cooler, the moisture condenses to form water droplets. If these water droplets enter the cylinders with the scavenge air they can remove the oil film from the liner, resulting in excessive cylinder liner and piston ring wear.

Related Read: How to Operate an Oily Water Separator (OWS) on Ship?

Cargo holds, generally of container vessels, have bilge wells located at the bottom on each side, port, and starboard. The hold bilges are normally pumped overboard through bilge eductor from Fire & GS pump as they contain only water. However, before pumping hold bilge wells, a visual inspection has to be carried out of the bilge wells. If any traces of oil is found, then they have to be pumped to the hold bilge collecting tank or other designated engine room tank, from where they would be processed in the OWS. Before any bilges are pumped directly overboard, it must be ensured that no local or international anti-pollution regulations will be contravened. The eductor should only be used when at sea.

Sludge and bilge management on-board are very critical and important. MARPOL rules are very stringent and have to be followed properly to prevent pollution at sea. Any violation of MARPOL can lead to imprisonment and huge fines.

7 Underrated Marine Technologies That Can Give Promising Results