You are here: Home › Maritime Law › What To Do When A Ship Is “Beset”?
TwitterFacebookLinkedInPinterestBuffer

“Beset” is a term defined as – When a vessel is surrounded so closely by ice that eventually it’s unable to move or manoeuvre under its own power or steer using its steering gear.

Beset of the vessel can lead the ship to dangerous condition wherein the vessel is unable to use its propulsion or steering machinery, leaving the vessel fully at the mercy of the wind, weather and ice packs. If the situation gets worse, the ship might drift to shallow regions or areas with thick ice or larger icebergs.

As the layer thickens or the pressure of the ice around the ship side mounts, the ice presses the hull and makes the vessel “Nipped”( When a ship finds itself in a situation where ice is forcibly pressing on both sides, it is said to be “nipped”).

Handling a vessel Beset or Nipped in ice is one of the toughest situations a Ship Master’s would face at the sea.

In 2013, MV Akademik Shokalskiy, a scientific expedition ship was beset by ice in Commonwealth Bay. Three icebreakers were called to help free the Russian vessel, which endured a fierce blizzard that appears to have increased the build-up of the surrounding ice. For two weeks Akademik Shokalskiy was trapped in thick ice in Commonwealth Bay, Antarctica while operating an expedition for the Australasian Antarctic Expedition 2013-2014. The scientists and passengers were evacuated on 2 January. 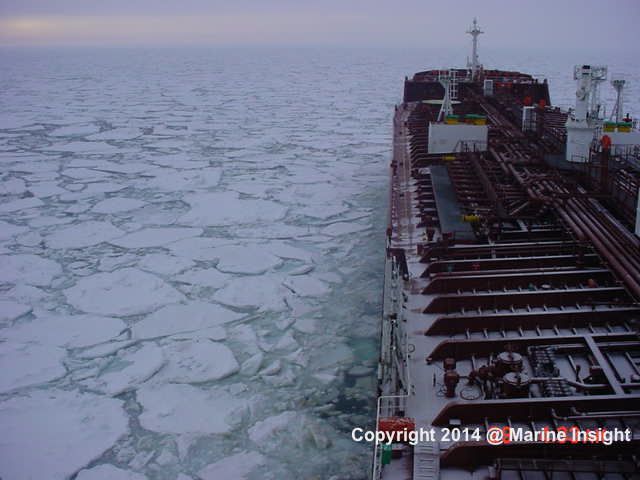 Ice navigation so far has drawn a lot of attention from shipmasters and weather routing agencies. In order to free a vessel from Beset situation, the following points may be crucial:

Patience:  Severe conditions often demand mariners to exercise patience and restraint from taking evasive steps, underestimating the strength of ice packs and direction of flow. On some occasions, seafarers are required to wait for meteorological conditions to improve. This helps the vessel in saving fuel and sometimes provide for necessary repairs to be carried out. However, it is extremely dangerous for a vessel to approach an iceberg closely even if it appears to be stable.  In case such a situation arises, the vessel must keep moving slowly, and the movements of the ship should be such that they work with the ice movements and not against them. It can be a long and tiring exercise with or without an ice breaker assistance. In such cases, mariners’ best ally will be keeping patience until the meteorological conditions changes.

Stability of a Ship: Superstructure icing is a major concern endangering the stability of the vessel. Intensive ice formation can result due to wind and seas from ahead. Ice accumulation is more on the windward side as compared to the leeward side, leading the vessel to list constantly on one side and to deck immersion angle for a loaded vessel. 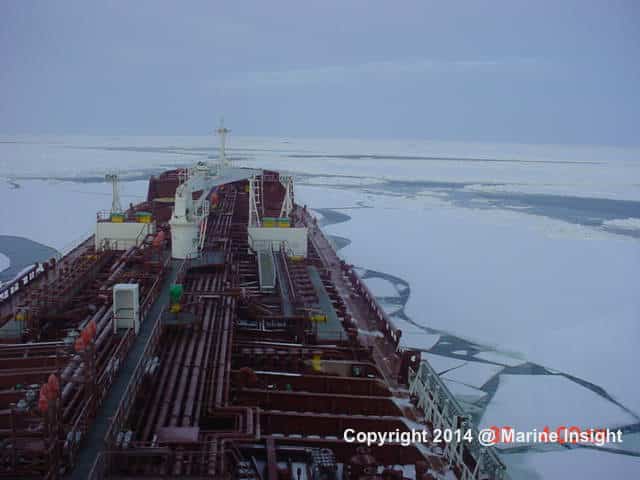 – It is advisable to avoid passage through an ice pack under pressure. Progress should be made in a general direction rather than the intended direction. While backing a vessel in pack ice the rudder should always be amidships

-Propellers can be kept to turn slowly with short kicks ahead. However, when a vessel is stuck fast, an attempt to free can be made by giving full speed astern. This may also be achieved by transferring the ballast in tanks or alternately flooding forward and aft tanks – which can reduce trim substantially and thus break the vessel free

-A heavyweight swung out on a cargo crane might give the vessel ample list to break the ice surrounding it. By attaching deadman or ice anchor to the ice, astern winches can be used to warp off the vessel while she is going astern

-Last resort can be to use explosives, placed in holes cut near the bottom of the ice around 10-12 meters deep and detonated while the vessel is moving astern

– While an ice breaker is assisting a vessel it is important for the vessel and its crew to be fully versed with the symbols between ice breaker and assisted vessel. If more than one vessel is using the assistance of an ice breaker, the distance between the vessels should be kept as constant as possible 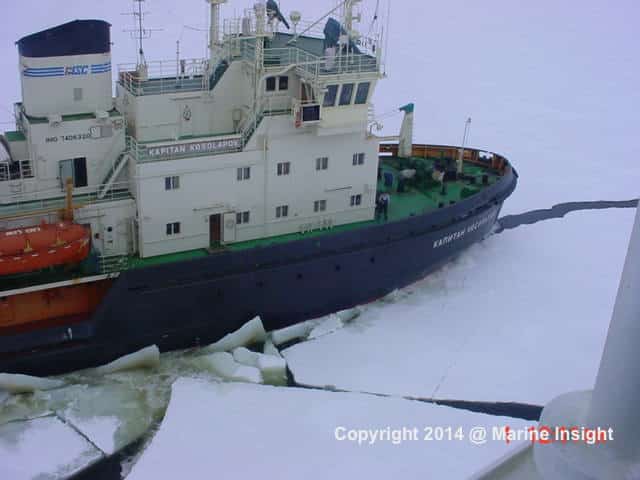 Ice navigation is very different from coastal navigation or navigation through congested waters or river passages. IMO ‘s subcommittee on Ship Design and Construction is co-ordinating to draft a new chapter XIV of SOLAS “ Safety Measures for Ships operating Polar Waters.” A draft code has also been developed which will be mandatory under Chapter XIV of SOLAS.

The Polar Code aims to cover a full range of design, construction, equipment, operational training, search and rescue and environmental protection matters relevant to ships operating in the polar regions. The subcommittee on Human element, Training and Watch-keeping (HTW) will further review the chapters on grounds of Fire Protection, Safety and Life Saving Appliances.

Thus legalization of ship operation and management will help secure the safety of shipping in polar areas which is gradually increasing. Equipping ships and seafarers with better training and methods will ultimately result in safe and environmentally friendly operations.

Polar Ocean Governance in an Era of Environmental Change

Arctic Security in an Age of Climate Change

How the Ice Melting in the Arctic has Affected the Shipping Industry?