Navigating in ice waters can be a real task for ships, as the later moves cracking and smashing through the frozen and frigid seas. While moving towards subzero temperature with ice covered waters, the ship’s captain has to be extremely cautious and must pay utmost attention to the type of ice, thickness, and its exact location in the subzero navigation areas. If there’s any kind of misjudgment during ice navigation, a detour from the navigable route would lead to additional fuel wastage and might also get the vessel stuck in thick ice leading to dangerous situation and damage.

The existence of ice on seawater corresponds to a major restraint for ships and offshore operations at high latitudes in both the hemispheres. The sea-ice, which on an average is 2–3 m thick, can be pierced only by specially designed ice-strengthened vessels or icebreakers with an appropriate ice class.

Most merchant ships and fishing vessels which are not ice-strengthened must consequently keep away from all ice waters and sub-temperature areas. In many places, where the concentration of ice is maximum and the ice pressure is highest, even the most powerful of the icebreakers have problems with ice navigation.

To avoid such mishaps during ice navigation, an ice pilot and ice breakers are normally provided for commercial vessel operations which help to safely guide the vessels through the ice field to and from their destinations. In addition to the ice pilot being on board and the ice-breaker’s relentless assistance, a few other measures must be kept in mind by the vessel’s crew during the ice navigation.

First of all, it is imperative to understand that if any alternative route is available for the ship, ice water should be avoided at all costs. However, if ice navigation is inevitable, it should be made at right angles to the leeward edge where the ice is loose or broken. While manoeuvring through ice if a floe cannot be avoided then it should be hit squarely with the stem. Note that a glancing blow may damage the ship’s shell plating or throw the vessel off course causing another unavoidable blow.

Entry in ice should always be done at low speeds to avoid any sort of damage. Once into the pack, the vessel’s speed can be increased so as to maintain headway and control so as to never lose all way off and avoid the ice floes to close in on the hull, rudder and propeller.

If the ship is stopped by heavy concentration of ice the rudder should be put amidships and the engines should be kept turning slowly ahead. This will wash away the ice that is accumulated astern and will help the vessel to fall back.

In a close pack during ice navigation, avoid sharp alterations of course and keep the speed enough for steerage way. Full rudder movements should be avoided or used only in cases of emergencies. 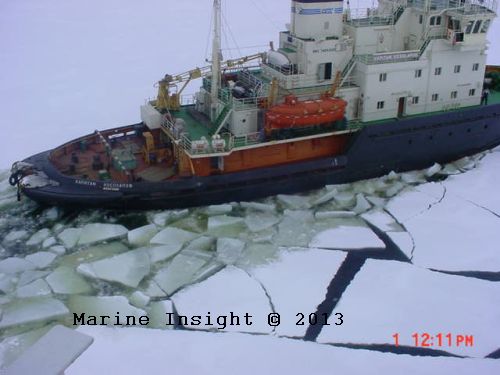 Always keep vigilant lookout for leads (navigable channel within an ice field) through ice. Additional lookouts should be posted forward or at higher ends for safety concerns. Conning should be carried out from the ship’s bridge to get a better view of the ice accumulation.

Keep in mind that at all times the stern must be observed for rudders’ movement so as to avoid a floe from actually moving the stern towards it. In such cases, it is advised to post men right aft with torches, whistles, walkie-talkies, etc. to make sure that the bridge is informed immediately in case the propeller is in any kind of danger. This is extremely important in twin screw vessels. Reduce speed if the ice goes under the ship. 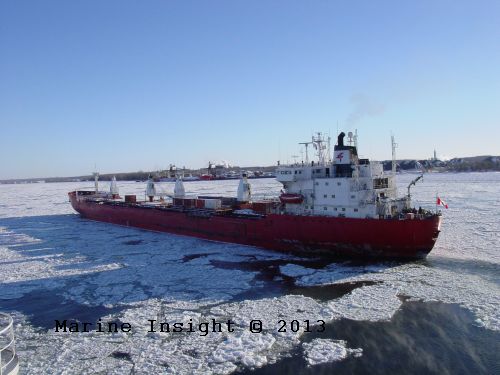 During ice navigation, engines should be kept running at all times and under maneuvering conditions in such a way that the ahead and astern movements can be easily carried out without time delay. Similarly, engine movements from ahead to astern and vice-verse should be made cautiously to avoid stressing the engine mechanisms in low temperatures, which could be unfavorable to the ship’s engine parts. Also, when ice approaches the stern of the vessel while maneuvering  bursts of the engines should be given accordingly to keep ice from accumulating.

As far as possible, avoid navigating through ice at night. It is preferred to “heave to” since the leads or lanes cannot be seen. Most ice navigators stop the vessel along the edge of the ice and leave the vessel drifting along with the pack.

At nights, seawater lubricated tail end shafts are in the danger of getting frozen. To avoid from freezing, vessels with single screws should have their aft peak tank filled with water and have it kept warm by means of steam hose injection, or other alternative means. The vessel should keep her engines running with propeller on low RPM so as to avoid seizure by ice. 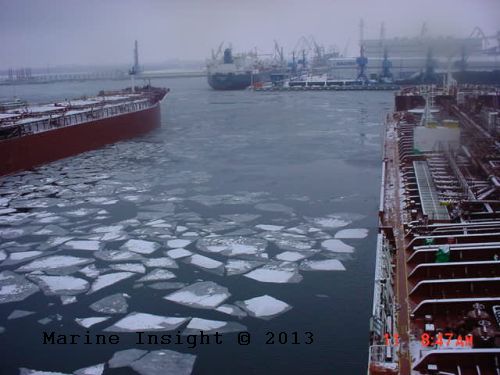 Anchoring in heavy concentrations of ice should be avoided; if ice is moving then its force may break the cable. When conditions permit, anchoring can be carried out and it must be done in light brash ice, rotten ice or widely scattered floes with the main engine on immediate notice. Anchor should be brought in as soon as the wind threatens to move ice onto the vessel.

Even with the advent of new techniques and technologies for ice navigation such as radar sensor images through cloud cover, infra-red images, and satellite images for a larger view of the surroundings around the vessel, it is vital to understand that ship’s operations of any sort under the influence of sea-ice are not only dangerous but also life threatening, and utmost care must be taken while navigating through such ice areas.