The E-Class container vessel fleet of the AP Moller-Maersk shipping line is known for its massive capacitance. Measured in terms of Twenty-Foot Equivalents (TEUs), the eight E-Class Maersk container ships are regarded to be the World’s largest container ships.

It is to note that all the eight Maersk E Class Series container ships are sister ships, which means that they have same features and characteristics. The Biggest Container ships in the world are:

The first E-class ship from the series, the Emma Maersk, was launched in the year 2006. It has a capacitance of 11,000 TEUs as per the company’s calculation standards, while according to the internationally prescribed TEU calculation standards, the large container ship can carry anywhere between 13,000 to 15,000 TEUs.

Built by the Danish Odinese Steel Shipyard, the Emma Maersk was christened for the late wife of the company’s founder – Maersk McKinney Moller.

The second vessel in the E-Class Maersk fleet, the Estelle Maersk was also launched in the year 2006. With a length of 397 metres and a beam of 56 metres, the Estelle Maersk has a TEU capacitance of 11,000 units as per the company’s calculating standards.

According to the internationally prescribed calculation standards, this figure rises up to around 15,000 TEUs.

Eleonora Maersk, launched in the year 2007 is the third in the series of E-Class vessels. Similar to Emma and Estelle Maersk, the vessel can carry around 11,000 TEUs (per company standards) and around 15,000 TEUs (per international standards).

Built by the Danish Lindo Shipyard, the ship offers a speed of 27 knots with a length of 397 metres and a beam of 56 metres.

The fourth in the series of the world largest container ship, the Evelyn Maersk was also launched in the year 2007. Built by the Odinese Steel Shipyard, Evelyn Maersk has a dead weight tonnage (DWT) of 156,907 metric tons.

The ship measures 397 metres lengthwise and 56 metres beam wise and has a capacitance of 11,000 TEUs (15,000 TEUs as per international standards).

The fifth large container ship, the Ebba Maersk, was launched in the year 2007.

The sixth in the series, the Elly Maersk was launched in the year 2007. Having a DWT of 1, 15,000 tons, the Elly Maersk has a speed of 19.7 knots. Lengthwise the sixth of the E-Class Maersk Container Ships measures 397 metres, with a beam of 56 metres and a height of 66 metres.

It’s TEU capacitance is same as all of her other sister vessels – 11000 TEUs and around 15,000 TEUs (per international standards).

Built by the Odinese Steel Shipyard, the Edith Maersk was launched in the year 2007 with cargo capacitance similar to her previous six sister vessels. The vessel is the seventh in the series of the world largest container ships in the Maersk-Moller E-Class vessel fleet.

The vessel specifications include the 90,000 kilowatts (kW) diesel engine to enhance its movement in the water.

The eighth and the final vessel in the Maersk shipping line’s E-Class fleet is the Eugen Maersk. Launched in the year 2008, the world’s largest container ship was televised as a documentary, the first Maersk E-Class vessel to feature so. The vessel has similar specifications to that of the other E-Class fleet with respect to dimensions and cargo capacitance. 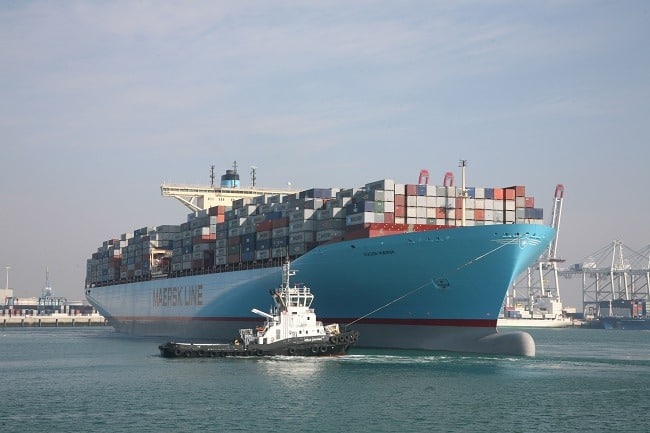 The Maersk shipping conglomerate has recently launched the Triple E-Class vessel which offers more capacitance. Around 10 such Triple E-Class vessels have been ordered by the company, which would revolutionize and set new standards not only for the Maersk-Moller Group but also for the other international shipping conglomerates. These Vessels when launched would take the place of E Class Vessels as the world’s largest container ships.