You are here: Home › Maritime History › A Brief History of the Panama Canal
TwitterFacebookLinkedInPinterestBuffer

The 48 mile-long (77 km) international waterway known as the Panama Canal allows ships to pass between the Atlantic Ocean and Pacific Ocean, saving about 8000 miles (12,875 km) from a journey around the southern tip of South America, Cape Horn.

Read: Do you know about these important Panama Canal Facts?

The describing of the Panama Canal goes back to the 16th century. After understanding the riches of Peru, Ecuador, and Asia, and evaluating the time it took the gold to reach the ports of Spain, it was suggested in 1524 to Charles V, that by cutting out a piece of land somewhere in Panama, the trips would be made shorter and the danger of taking the treasures through the cape would rationalize such an enterprise. A survey of the isthmus was ordered and subsequently, a working plan for a canal was drawn up in 1529. The wars in Europe and the thirsts for the control of kingdoms in the Mediterranean Sea put the project on permanent hold.

In 1534 a Spanish bureaucrat suggested a canal route close to that of the now present canal & shortly abandoned its interest in the canal.

Various surveys were made between 1850 and 1875 showed that only two routes were practical, the one across Panama and another across Nicaragua. In 1876 an international company was organized; two years later it obtained a concession from the Colombian government to dig a canal transversely the cape.

In 1899, the US Congress created an Isthmian Canal Commission to observe the potential of a Central American canal and to advise a route. The commission first decided on a route through Nicaragua, but later on, reversed its verdict. The Lesseps Company offered its assets to the United States at a price of $40 million. The United States and the new state of Panama signed the Hay-Bunau-Varilla treaty, by which the United States guaranteed the liberty of Panama and secured a continuous lease on a 10-mile strip for the canal. Panama was to be compensated by an early payment of $10 million and an annuity of $250,000, beginning in 1913. This strip is now known as the Canal Zone.

Construction of a lock canal was decided in 1906. The first three years were spent in the expansion of construction facilities, surveys, and disease control. The canal was opened in Aug. 15, 1914 and formal dedication took place on July 12, 1920. The whole cost was $336,650,000, and c.240 million cu yd of earth was vacated. 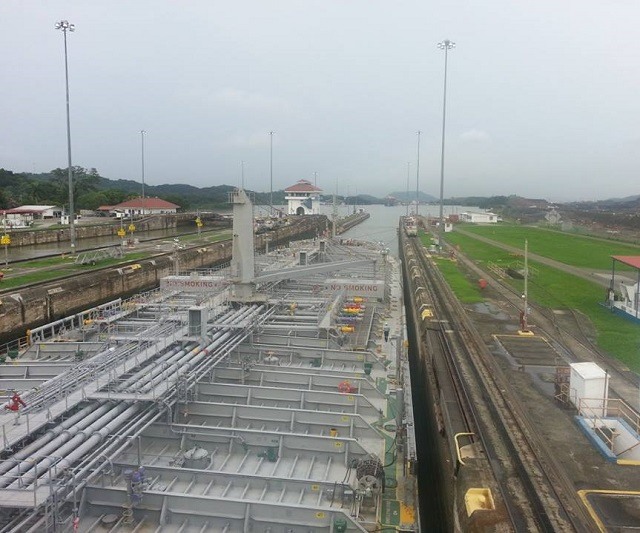 In 1939, treaty amendments increased Panama’s annuity to $434,000, provided for a transisthmian highway, and abrogated the US. guarantee of the impartiality and autonomy of Panama. Although in the same year Congress authorized construction of the third set of locks, then World War II intervened, and the plans were shelved. In 1955 the income was raised to $1,930,000, and the United States undertook to build a high-level bridge over the Pacific side of the canal. The Gaillard Cut was widened in 1969 to permit two-way traffic.

Very few human endeavours have ever conceded to change the face of the planet on which we live, as did the successful completion of the inter-oceanic Panama Canal in 1914 by the United States.

If you liked this article, you may also like to read A brief history of the Suez Canal.