The only time a vessel can be assumed to be stationary and in upright position is when it is in dry dock or before it is launched to the sea. Once in the sea, the ship has to sustain different environmental conditions, along with effects of various external and internal changes.

A ship is always acted upon by several forces from factors such as seawater, wind, internal mass weight, free surface effect etc. Thus, it is of utmost importance for a vessel to always remain stable and afloat in all conditions.

Ship stability can be defined in simple terms as its characteristics or tendency to return to its original state or upright state, when an external force is applied on or removed from the ship.

A ship is at equilibrium when the weight of the ship acting down through centre of gravity is equal to the up thrust force of water acting through centre of buoyancy and when both of these forces are in same vertical line.

A ship will come to its upright position or will become stable, when an external force is applied and removed, if the centre of gravity remains in the same position well below metacentric height of the ship. When ship is inclined, centre of buoyancy shifts from B to B1, which creates a movement and the righting lever returns the ship to its original position and makes it stable. 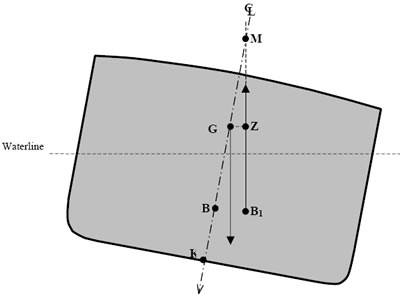 M is metacenter and GZ is righting lever

A ship is seaworthy if it fulfills two important stability criteria- Intact and Damage stability.

Requirements for Intact and Damage Stability of the Ship

For a cargo vessel, the intact stability requirements are follows-

The angle of down flooding is an angle at which deck immersion takes place with subsequent water ingress. 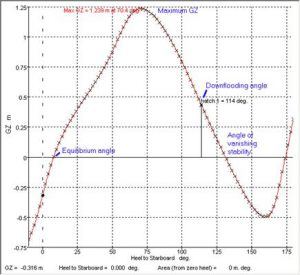 Under all the criteria as applicable, vessel margin line should not be submerged after the damage. Margin line is an imaginary line drawn 75mm below the free board deck.

Intact and damage stability are very important factors that govern the overall stability of the ship.

You may also like to read-What is Anti-Heeling System on Ships?

Book on Naval Architecture by E A Stokoe