On completing discharge, a tanker was ordered by the port to vacate the berth and tie up at a waiting berth, about 8 miles upriver. The assigned berth was identified with some difficulty on the chart and was seen to be on a sharp bend in the river. A passage plan was made with the limited information available onboard, and, during the transit, the pilot provided more details of the berth. He mentioned that the jetty was partly damaged and had two pontoon barges secured to it and that the vessel was to moor starboard side to them.

The Master was advised that the final line configuration would be 3+2+2 forward and aft and that about a mile before the berth, two ‘powerful’ tugs would assist the mooring operation with ship’s lines from the port bow and quarter. The plan was explained to the C/O and 2/O before they proceeded to their respective mooring stations. Meanwhile, the deck crew rigged portable fenders just above the water level as the pilot warned that the steel pontoons had none and also prepared ship’s lines for the tugs on the port side. Just before the tugs approached on the Master’s instructions, the C/O prepared the port anchor for letting go in an emergency.

Contrary to what the pilot had stated earlier, both tugs appeared to be too small and underpowered for the tanker’s size, and they refused to make fast the ship’s lines. To the shock and disbelief of the vessel’s bridge team, the pilot denied that he had ever implied that the tugs were to be made fast. With no possibility of aborting the manoeuvre, the vessel was forced to attempt berthing without the benefit of controlling towlines.

The tanker passed two bulk carriers double-banked at the wharf close downstream and then prepared to approach the two pontoon barges secured in line at her assigned berth. Considering the length of his ship, the Master estimated a final overhang of about 25 metres at each end. He also noticed that the middle section of the pier, inshore of the two barges, was missing. 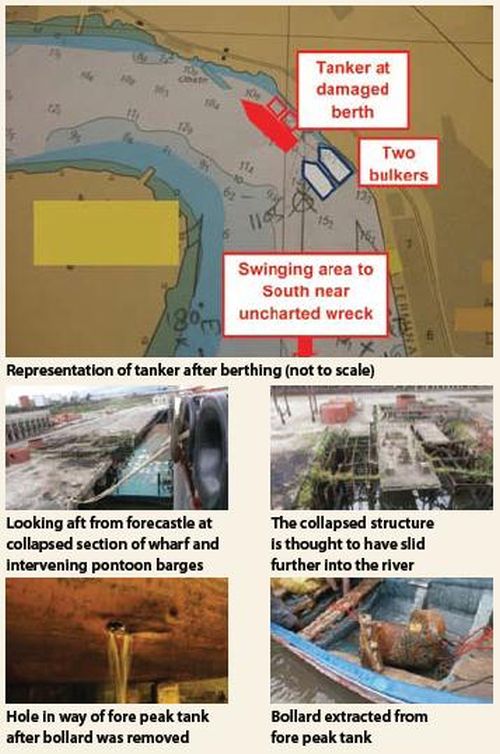 A strong current was setting the ship sideways on to the pontoons and wharf. With no meaningful tug assistance, a very tense and stressed Master heeded the pilot’s rapid engine and rudder orders. To add to his worries, the C/O reported from the forecastle deck that the collapsed portion of the jetty appeared to be extending into the river. The vessel was drifting astern with the ebb current and the 2/O reported that the distance to the bulkers was only 20 metres and closing rapidly. An urgent ahead movement on the engine took the tanker ahead by an estimated 50 metres when the engine was stopped and the Master ordered the port anchor to be let go. Holding on to 2 shackles of chain, the vessel was being brought sideways towards the pontoons, when a loud grating noise was heard along the starboard shell plating accompanied by intense shuddering.

After securing to the shore with unusually long lines, it was discovered that the empty fore peak tank was holed below the waterline. Fortunately, the ballast pump was able to cope with the inflow and a zero tank sounding was easily maintained. The company’s emergency procedures were followed and appropriate reports were sent to the office. The next day, when the tank was carefully opened for the class surveyor, a mooring bollard was found tightly wedged in the hole at the bottom of the tank, partly stemming the inflow. It was decided not to disturb the bollard, which fortuitously acted like a plug. It is presumed that the impact dislodged the bollard from the submerged collapsed section of the pier. The surveyor issued a temporary permit to sail to the nearest drydock for permanent repairs and the vessel departed from the port.

During the Master-pilot information exchange before departure, the swinging area about 0.5 mile downstream from the berth was shown on the chart and it was also revealed that a harbour tug had recently sunk in mid-channel. The Master was horrified that the pilot who conducted the vessel inward had omitted to relay this crucial information. After casting off the berth just after slack water, the vessel’s stern-first exit was assisted by two large tugs. In order to avoid the new unmarked wreck,the pilot executed the swing closer to the shoal ground on the west bank, which gave the Master more anxiety, as the tugs appeared to be turning the vessel with minimum power.

During the short passage to drydock, all tanks were monitored and the ballast pump was continuously discharging the ingress into the fore peak tank. Regular situation reports were sent to the management team ashore. In the drydock, it was observed that apart from the large hole punched in the shell plating in way of the fore peak tank, there was no other damage.

It may be advantageous to appoint an independent owner’s agent or a port captain in ‘difficult’ ports, where reliable navigational and commercial information may not be readily provided by charterers / local authorities.