Recently, a freight ship was underway in 15 foot seas when the forepeak flood alarms activated. The crew investigated and discovered the starboard anchor had slipped 10-15 links, causing it to strike and puncture the hull.

As a result, seawater flooded the bow thruster and emergency fire pump compartment. The casualty resulted in excess of $1 million in vessel damage and a month’s lost revenues while the vessel was out of service undergoing repair.

During the repair period, it was discovered that the anchor windlass brake pad had worn down to 2-3mm thickness. With only this amount of pad, the fully applied brake could not achieve its designed holding power. The crew should have recognised the excessive wear to the brake pads and that these required replacement. It was also discovered that the anchor involved in the incident was a replacement, and had different specifications to the original anchor. 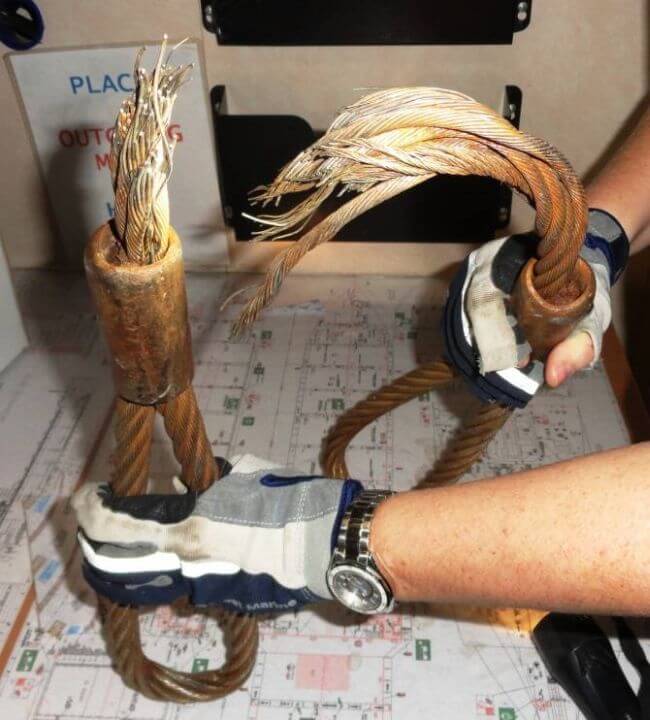 The replacement anchor’s relative position in the hawse pipe was not the same as the original, because the shank length and connecting linkages were different. The size difference prevented the riding pawl from properly engaging the anchor chain. As an added safety device, a wire sling had been used to secure the anchor while at sea. The wire sling was threaded through a chain link and secured to the vessel with a pelican hook.

When the sling broke and the brake failed, the anchor’s weight and the ship’s movement then caused it to drop before the riding pawl could properly engage. The sling failure was likely caused by the corrosion of the inner wire strands; the inner wire strands being exposed to the elements because of the sharp bend in the wire. Although the wire sling was inspected regularly, those performing the inspections were not instructed on how to examine and determine its serviceability.

Editor’s note: Inspection of wire rope is not an easy task and cannot be properly done without opening the lay with a spike and examining the inner core. Even this step is not foolproof, and wire rope degradation within the core can be hard to spot. Crew should adopt the ‘precautionary principle’ when using and examining wire rope – that is, if unsure, replace with new.