A car carrier sailed from port under the con of a pilot, with 1,633 cars and various heavy equipment loaded. The ship proceeded out, making good a speed of 10 kts when the pilot gave the first helm order to starboard. The turn was completed without incident, the ship heeling to port and returning upright as expected. A few minutes later, as the car carrier entered the main channel, the pilot requested that the ship’s speed be increased.

Meanwhile, the chief officer was still undertaking final stability calculations in the cargo control room. He became concerned that the indicated metacentric height (GM) on the stability computer was less than his earlier departure stability calculation had predicted. He sent the deck cadet to take soundings of the three aft peak tanks in preparation for loading additional ballast water. The chief officer began setting up the ballast system as he anticipated that he would require additional ballast in the aft peak tanks. 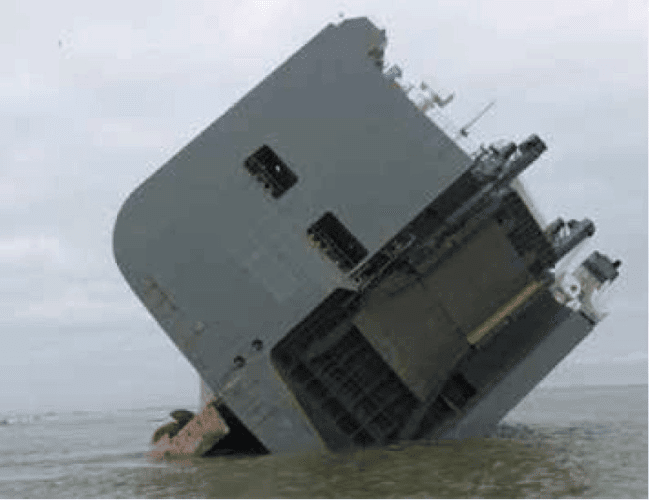 As the vessel made the next turn, this time to port, it heeled progressively to starboard until its rudder and propeller were clear of the water. The vessel then suffered a blackout. Several cargo units and items of ship’s equipment broke free from their lashings and shifted as the ship heeled. This resulted in a hole being punctured through the shell plating in way of the ship’s gangway recess, allowing sea water to enter deck 6 when it became submerged.

Two tugs were tasked by vessel traffic services (VTS) to proceed towards the vessel and assist as required. Eventually the car carrier grounded. The inclinometer on the bridge was indicating a list of 40° to starboard.

Following the accident, all 24 crew were successfully evacuated from the ship or recovered from the surrounding waters. There was no pollution. A major salvage operation successfully refloated the vessel and it was taken to a safe berth.

A key finding of the official investigation is that a departure stability calculation had not been carried out on completion of cargo operations and before the car carrier sailed. Witness and anecdotal evidence suggests that this practice extends to the car carrier sector in general. The critical task of establishing whether the ship has a suitable margin of stability for the intended voyage before departure had been eroded on board. This unsafe practice had become the norm.

Many contributing factors were interconnected with the unsafe practices, such as: