On a passenger vessel, two members of the crew were preparing a lifeboat for lowering as a drill. The lifeboat’s doors were opened and the two locking pins were inserted in the dedicated slots. The lifeboat was lifted slightly from the stowed position so that the forward and aft lashing gripes could be retracted. The aft lashing lever was released by one crew member and the lashing gripe retracted normally.

The other crew member was busy disconnecting the battery charging supply cables and checking that the engine was ready to start. Somehow, both crew forgot about the forward lashing lever. It remained in position and thus the bow of the boat remained secured.

Soon afterwards, other crew members arrived to assist in the lowering: five to man the boat and one to lower the boat. The crew member who was to lower the boat did not visually check the forepart of the boat. He released the winch brake, and the stern of the boat immediately started to descend, but the bow was locked in theguide by the forward lashing gripe. The lifeboat was destabilised and tilted heavily backwards. Under the combined effects of the excessive inclination and the weight, the bow of the boat freed itself from the guide and the forward long-link slipped out from its release hook. The lifeboat tilted heavily forward, creating a new imbalance. The aft longlink in turn slipped from its hook, tearing its stop pawl. The lifeboat then fell into the sea with a forward tilt angle. 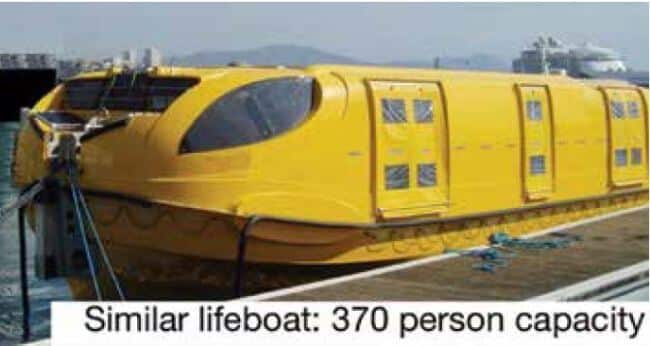 Due to the force of the impact, the forward hook-man was fatally injured. Two other crew were seriously injured and two more sustained minor injuries.

Types of Lifeboats Used On Ship

Nadiro Lifeboat: The Next Level of Safety in Lifeboat Launching Systems of Ships

Measures to Stop Accidents on Lifeboats