The crude oil tanker Amoco Cadiz was single-handedly responsible for one of the hugest maritime casualties in the late 1970s as it tipped over two hundred thousand tons of rock (crude) oil near the Brittanie coast line, near to the waters of the English Channel.

However unprecedented the reasons for the oil tanker accident were, post the oil spill, the maritime ecosystem in the region were disturbed thoroughly, some with long-lasting effects hindering their otherwise occurring naturalness.

Registered to the Liberian port of registry, the Amoco Cadiz was a VLCC vessel owned and operated by the American shipping conglomerate Amoco. 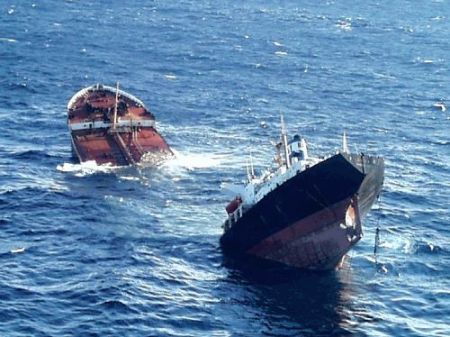 Put into operation in the year 1975, the oil carrier was built in the Spanish shipbuilding yard of Astilleros Espanoles and was in operation for three years, before the accident cut short her operational longevity.

The oil disaster occurred quite unexpectedly in the morning hours of 16th March, 1978 while the crude oil tanker was on-route from the Gulf of Persia to Europe, laded with almost 2,20,000 tonnes of rock oil.

Inclement weather conditions wrecked the vessel’s steerage equipment completely, preventing its manoeuvring in the water. And though tugging vessels, responding to the call of disaster, were prompt to respond, the continuing rough weather forestalled the tugging operations at the earliest. The resultant delay caused the oil tanker to further adrift near to the shore line, compounding the problems of the Cadiz’s captain and that of the skippers of the towage vessels. 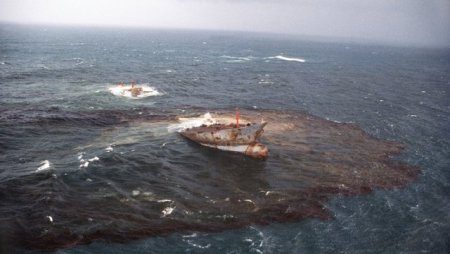 Towards the end of the day, almost 12-hours after the vessel’s steerage was wrecked, the tanker ran aground which led to a complete inundation of water into its engine compartments. This also led to the cleaving of the vessel through its hull, which became the primary causation for the oil spillage.

The persistent gales and stormy weather prevented an immediate containment of the spilt oil and also the salvaging of the oil remaining within the broken confines of the tanker. The week following the actual accident, the tanker yet again cleaved which caused the balance of the entirety of the original oil cargo to flood into the oceanic waters.

No crew person lost his life though the captain undertaking his responsibility monitored the condition in situ, till he was suitably discharged from his captaincy duties.

Repercussions to the Maritime Life-forms

In terms of the wreckage to the maritime life-forms occurring in the water zone, the loss was enormous. The water zone boasted of several unique animal, bird and plant life-forms which were irrecoverably – at least for the near future – lost following the ship accident. These included two-shelled molluscs, arthropods and plants belonging to the Cayenne Jasmine (periwinkle) family. 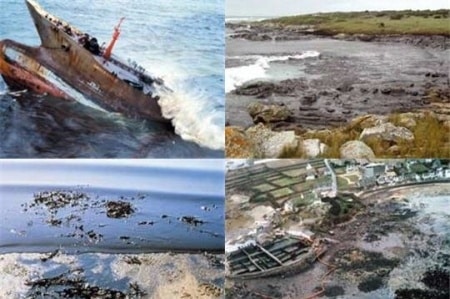 Though these life-forms were expected to rejuvenate following a time gap of at least five years, several alternative life-forms non-native to the original water zone came up replacing the naturally occurring ones. Alongside it was also observed that the reproductive cycle and the ability of various fauna was damaged extensively, which caused grave concerns about the oil spillage accident.

Fishing activities took a huge hit as most of the caught fishes either showed symptoms of extensive health damage or were already dead because of the extensiveness of the oil contamination.

Concerns about Adherence to LOF

Lloyds Open Form (LOF) is a document presented to the captain of a vessel in emergency to enable a suitably equipped ship to carry out the necessary salvaging operations. The form, mandated by the maritime body Lloyds, doesn’t bear any specification about the costs of the salvaging operation, thus justifying its titular import. According to its stipulations, the costs are to be determined at a later date in a court with both parties present and amenable to the mediated costs. 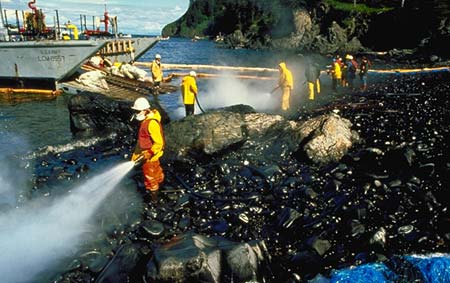 Following the accident, when the skipper of the tug ship Pacific proposed a LOF solution to salvage the Amoco Cadiz, in adherence with his owners’ demands, the captain of the oil tanker refused to agree to the estimated salvaging costs. This caused further delay to the tugging and salvaging operations, which gave rise to a huge uproar amongst the maritime community throughout the world. Experts and critics argued that the damage following the accident would have been limited, had there not been an unwanted prioritisation of salvaging costs between the two parties.

Current Scenario and Ramifications to the Shipping Domain

With a shroud of oil covering over 300-miles in the French province, the ramifications of the oil disaster were hugely felt. Not just to the locals but also to the vessel’s American owners. Financially, the loss was totalled to about a quarter of a billion, though the French estimates were quoted at nearly eight times that amount. The American conglomerate finally settled to reimburse almost half of their originally quoted loss tabulation to the French governmental authorities in the year 1990, following a long and prolonged stand by both the parties.

Looking beyond the financial aspect however, the spectre of the Amoco Cadiz oil spill still haunts the global maritime industry. Listed as the world’s fifth hugest oil tanker accident, the Cadiz oil disaster is a maritime chapter whose pages might have been turned many times over, but one whose adverse memories will continue to put its details into prominent focus, no matter the passage of time.