VesselsValue’s Senior Analyst Court Smith gives a rundown on which countries have splashed the most cash on second-hand vessel purchases over 2018. 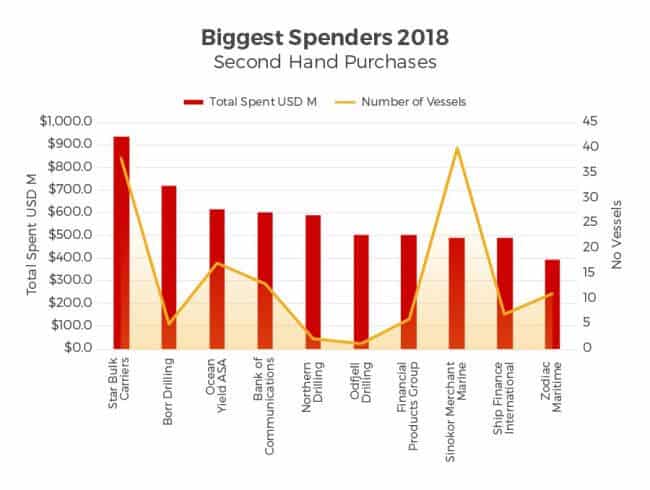 The biggest buyer in 2018 of second-hand vessels is the Greek company Star Bulk Carriers. The vessels involved in the 2018 transactions were valued at just under 1 billion USD on the day of sale. Star Bulk have acquired vessels from a variety of sources: 6 capesize bulkers in a part share and part cash deals from ER Schiffahrt, 15 more bulkers from Songa Bulk with 145 million USD cash plus 13.7m shares, 3 capesizes from Oceanbulk for 3.4m shares, 6 panamax and post panamaxes from Augustea Group in a debt and shares deal and another 6 from ABY Group Holding at the start of the year in another part debt, part share deal.

Throughout 2016 and 2017, Chinese buyers remained close to the top of the bigger spenders on second hand vessels. Chinese financial institutions in particular are the purchasing powerhouses, making up the top 5 biggest spenders in 2018, involved in over 2 billion USD worth of transactions.

The majority of sales have been in the traditional maritime sectors: bulkers, containers and tankers. However, the Bank of Communications have also purchased 2 LNG vessels for 379 million USD in 2018. Considered more of a niche trade, LNG has become more mainstream throughout 2018 as increased demand makes this vessel type a more desirable investment.

The biggest spenders in Norway are buying Mobile Offshore Drilling Units, unsurprising given their historic interest in the offshore space. Since its formation at the beginning of 2017, Borr Drilling has been raising funds from a variety of sources, such as Schlumberger Ltd, Goldman Sachs and Belgian Euroclear Bank. Adding an extra 5 MODUs in 2018, Borr Drilling has amassed a fleet of 36 live and on order drilling units using this war chest.

Other key players from Norwegian include Ocean Yield, the public shipping and offshore company within which Norwegian billionaire Kjell Inge Rokke owns a 61.7% investment. All the cargo vessels purchased within the last 12 months include charter agreements.

MPC Container ships is another recent addition to the shipping landscape, acquiring its first vessels in the spring of 2017. Now with a fleet of 71 container vessels, mostly purchased from German owners, they are the largest owner of sub 3,000 TEU box ships.

JP Morgan Global Maritime is the US company who has spent the most on second hand vessels: 308 million USD so far in 2018. However, they have changed their purchasing strategy half way through the year. They stopped buying bulkers in the summer and acquired 4 LPG vessels, worth 263 million USD on the day of the sale. Today they are valued at 272 million USD, already a paper profit of 9 million USD. They have been steadily selling off their bulkers throughout 2018, already making 65 million USD in profit on 11 trades. Genco spent the second most on vessels in 2018 so far, spending 239 million USD on 6 vessels.

Sinokor is an aggressive player in the sale and purchase markets and continues to be a net buyer of ships. The purchases the company has made over the past several years have been spread across all market segments. It is interesting to note that they invested almost as much money in new build orders, spending 423 million USD at shipyards in 2018, compared with the 40 second hand purchases.

They have been more active buying than selling in 2018. Their activity in the LNG space was mostly for older, steam turbine vessels, but a look at the average age profile of ships they acquire shows they have been investing in ships around 10 years of age, a natural transaction point for commercial vessels as they leave their first owner. The company has been a net buyer even when considering the years of 2014 and 2015 when they liquidated a substantial number of ships.