You are here: Home › Marine Navigation › The Strait Of Dover – The Busiest Shipping Route In The World
TwitterFacebookLinkedInPinterestBuffer

The Dover Strait or the Strait of Dover is a vital maritime route in the Western European region located at the narrowest part of the English Channel. It is the strait that separates the English Channel and North Sea, and a boundary between the Great Britain and France, or continental Europe. The strait has width of 18-25 miles, while the depth of the strait is between 120 to 180 feet. Across the Dover Strait, the shortest distance is 20.7 miles, from the South Foreland to Cap Gris Nez, a cape near to Calais in France.  Since the width of the strait is less, it is possible to see the opposite coastline of both the countries with the naked eye on a clear day.

Geologists suggest that the Strait was created, half a million years ago, by the erosion of a land bridge that connected the Great Britain and the mainland Europe. Researchers claim that water suddenly started cascading over the narrow strip of land and eventually damaged the natural bridge hundreds of thousands of years later in a two-stage process. The new study published this year said the first breach must have happened about 450,000 years ago, creating a smaller channel compared to the existing one. The second one, probably happened hundreds of thousands of year later, created a catastrophic breach, separating Britain from France completely. Since the exact period of these events remain uncertain, the Geologists from UK, Belgium and France are planning to drill into the sea floor in order to retrieve samples from the plunge pool sediments, hoping to determine the precise time.

The Strait of Dover, which is considered to be the busiest maritime route in the world, has been a mainstay of the European shipping network for several years now. In spite of its narrowness, the Strait’s geographic location is quite distinct. Both for vessels wanting to cross the English harbours and enter European harbours and for those entering the North and the Baltic Sea through the English Channel, passing over the Dover Strait is unavoidable. Statistically, it is estimated that the Dover Strait sees the passage of around 400-ships on an everyday basis. These vessels transit through the Strait of Dover are not only cargo carrying ships but also Voyager and specific Ro/Ro ferryboats.

The harbour of Dover on the strait’s British side and the harbour of Calais on its French side are two of the world’s most engaged harbours located along the Strait. Since it is a major transportation link between the two countries and also part of a busy shipping route, the traffic safety has become a critical issue in the water in recent times.  And, the significance of the Strait has been further emphasised with several necessary protocols set up in order to enable a safer and more secure passage through the strait. In addition, the Dover Strait is also referred to as the Strait of Calais on account of its significance to the French maritime domain. Alongside, being a crucial marine entryway, the Dover Strait is also a popular recreational swimming location, especially for swimmers wanting to cross the English Channel. Meanwhile, in order to reduce the traffic in the Strait, the 50.45-kilometre-long Channel Tunnel was opened in 1994 between the UK and France. The underwater rail tunnel, one of the biggest engineering projects ever undertaken in the UK, connects Folkestone in UK and Coquelles in France.

Maritime Protocols and Regulations in the Strait of Dover

Being the busiest international seaway in the world, several important and noteworthy regulations have been established to aid the passage of vessels through the strait during the past four decades. Due to its narrowness, the Strait had witnessed various accidents every year in the earlier days. As part of the introduction of Collision Regulations of 1960, the strait comes under full radar surveillance and also operates a Traffic Separation Scheme (TSS), with which two lanes run through the strait for inward and outward-bound traffic in order to avoid collisions. Introduced in 1967, the Traffic Separation Scheme in Dover was the first International Maritime Organisation (IMO) approved TSS in the world. The Collision Regulations was later replaced with International Regulations for Preventing Collisions at Sea, which adopted as a convention of the IMO in October 1972. The new law amended the existing regulations with more strict navigation rules to prevent collisions in the water. 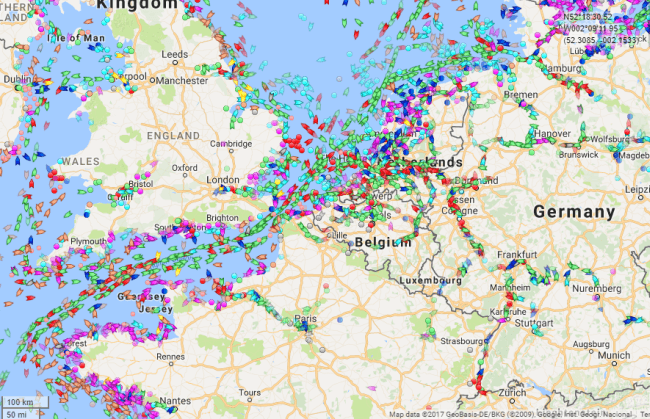 In addition, the CNIS (Channel Navigation Information Service), which was established in 1972, runs for the fulfilment of the aforesaid objective. The CNIS helps in the supervising of the maritime traffic crossing through the Strait by way of a full-day, round-the-clock radar system surveying and radio channel feasibility. Jointly operated by the UK and France from the Dover Maritime Rescue Co-ordination Centre (MRCC) in the UK and France’s CROSS Gris Nez, CNIS is assigned to keep the Dover Strait TSS under observation in addition to monitoring the flow of traffic. In the case of any ship not following the stipulated guidelines while crossing the Strait, the Channel Navigation Information Service is also authorised to report the lapse and take any measures required as a set-off.

The Strait of Dover also falls under the category of a ‘mandatory reporting zone.’ Under Pas de Calais/Dover Strait report or CALDOVREP, the vessels with GRTs over 300 tonnes, transiting these zones are mandated to announce their details and specifications. The information required to provide include name of the ship, call sign, IMO identification number and MMSI number, position in latitude and longitude, the draught of the ship, course and speed of the vessel, route information, details about the hazardous cargo and IMO class and quantity, among others. The vessels entering the Strait through its South-western entryway are required to announce their details to the British Coast Guard at the Dover harbour. Similarly, ships that use its North-eastern entryway to pass through the strait are required to announce their details to the French coastal authorities at the Cape of Gris Nez. However, ferries operating in the Strait of Dover need not take part fully in the scheme, but only need to advise the Dover coastguard or CROSS Gris Nez about their departure.

Naval Battles and The Dover Strait

The Strait of Dover has played a significant role in several historic naval battles in the region. While the first notable one would be connected with the Spanish Armada, the most significant involvement is in the Battle of Dover Strait that happened in October 1916 during the First World War. The Battle of Dover Strait saw five groups of German torpedo boats entering the Strait and attacking a different section of the shipping in the channel, and also attempting to disrupt the Dover Barrage. Though the German torpedo boats were challenged by the British naval ships, they could destroy one British destroyer, a transport, and several drifters before withdrawing from the scene.

The Strait was also the scene of the second Battle of Dover Strait that happened during the First World War itself. In April 1917, two groups of German torpedo boats raided the Dover Strait as they did a year ago in a bid to attack Royal Navy ships patrolling in the Strait. Two Royal Navy destroyers, HMS Broke and Swift, engaged with the torpedo boats and were able to sink two of the German torpedo boats after suffering damages themselves.  Moreover, the Strait of Dover marked its role in the history of Second World War as it witnessed the Battle of Dunkirk. As portrayed in Christopher Nolan latest war film, Dunkirk, the battle marks the fight between British allies and Nazi Germany, and also the defence and evacuation of British and Allied forces in June 1940.

Marine Life at the Dover Strait

Apart from the economic importance, the Strait of Dover also boasts of a rich and varied maritime ecology. Having a depth of 120 to 180 feet, the Dover Strait has a succession of rocky areas, sandy flats and sub-aqueous dunes underneath, creating a rich marine environment. Many underwater species comfortably find shelter in the Strait since the strong currents of the Channel are running slow around the rocky areas. According to the ecologists, the water is clearer in these areas, helping a variety of algae to grow significantly.

Moreover, since the Dover Strait makes a bridge between the Atlantic Ocean and those of the southern part of the North Sea, it has become a transition zone for the species from both the oceans. The rich marine life in the strait has led to various environmental stipulations being imposed in order to ensure the continuity of the Strait’s ecological richness and variety. In addition to these, further, continued efforts are also being undertaken both by British and French authorities to nurture the environmental diversity of the locale.

What are Mooring Anchors?

When Should Officer on Watch (OOW) Call the Ship’s Master?
Want to share your tips and advice? Got questions? Visit the community forum to ask questions, get answers, meet people, and share your tips!