Several electrical machines and panels are fitted on board so that the ship can sail from one port to another, safely and efficiently.

The electrical machinery and system require scheduled maintenance and checks to avoid any kind of breakdown during sailing.

Different instruments are used onboard for measuring several electrical parameters to analyze and keep these machines in proper running condition.

A permanent magnet moving coil (PMMC) is one such instrument which is popularly used onboard and has several applications. The other popular nomenclature of this instrument is D’alvanometer and galvanometer.

When a current-carrying conductor is placed in a magnetic field, it experiences a force and tends to move in the direction as per Fleming’s left-hand rule.

The interaction between the induced field and the field produced by the permanent magnet causes a deflecting torque, which results in the rotation.

The three important torque involved in this instrument are:

where N: turns of wire on the coil

B: flux density in the air gap

I: current in the movable coil

L: vertical length of the coil

Theoretically, the torque (here electro-magnetical torque) is equal to the multiplication of force with distance to the point of suspension.

Therefore the total torque will be = TL + TR

Here are a few fantastic ebooks to get important maritime information in the next couple of minutes!

eBooks For The Smart Mariner 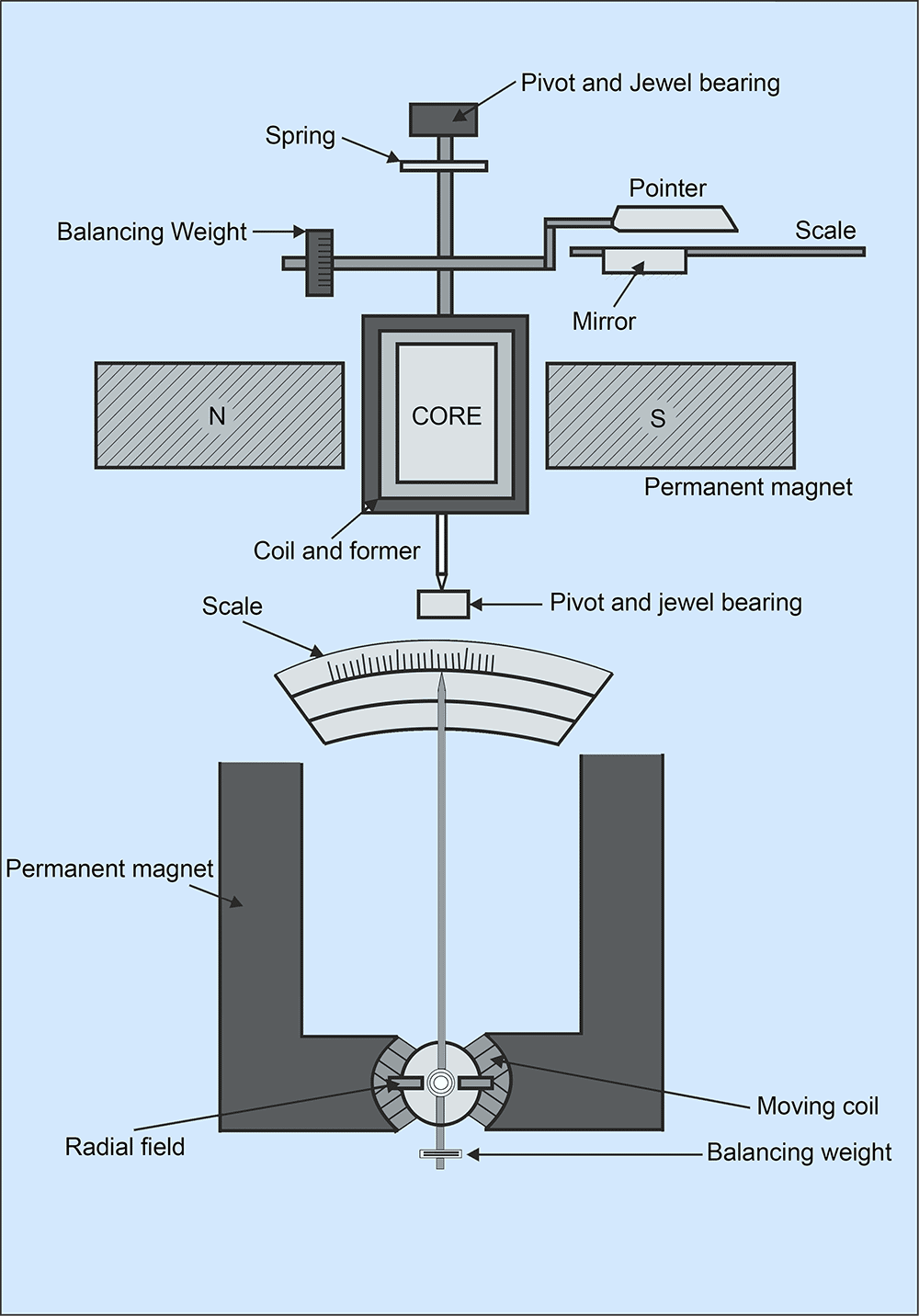 This torque is produced by the spring action and opposes the deflection torque so as the pointer can come to rest at the point where these two torques are equal (Electromagnetic torque = control spring torque). The value of control torque depends on the mechanical design of spiral springs and strip suspensions.

The controlling torque is directly proportional to the angle of deflection of the coil.

This torque ensures the pointer comes to an equilibrium position i.e. at rest in the scale without oscillating to give an accurate reading. In PMMC as the coil moves in the magnetic field, eddy current sets up in a metal former or core on which the coil is wound or in the circuit of the coil itself which opposes the motion of the coil resulting in the slow swing of a pointer and then come to rest quickly with very little oscillation.

A coil of thin wire is mounted on an aluminium frame (spindle) positioned between the poles of a U shaped permanent magnet which is made up of magnetic alloys like alnico.

The coil is pivoted on the jewelled bearing and thus the coil is free to rotate. The current is fed to the coil through spiral springs which are two in numbers. The coil which carries a current, which is to be measured, moves in a strong magnetic field produced by a permanent magnet and a pointer is attached to the spindle which shows the measured value.

When the torques are balanced the moving coil will stop and its angular deflection represents the amount of electrical current to be measured against a fixed reference, called a scale. If the permanent magnet field is uniform and the spring linear, then the pointer deflection is also linear.

The controlling torque is provided by two phosphorous bronze flat coiled helical springs. These springs serve as a flexible connection to the coil conductors.

Damping is caused by the eddy current set up in the aluminium coil which prevents the oscillation of the coil.

The PMMC has a variety of uses onboard ship. It can be used as:

When PMMC is used as an ammeter, except for a very small current range, the moving coil is connected across a suitable low resistance shunt, so that only small part of the main current flows through the coil.

The shunt consists of a number of thin plates made up of alloy metal, which is usually magnetic and has a low-temperature coefficient of resistance, fixed between two massive blocks of copper. A resistor of the same alloy is also placed in series with the coil to reduce errors due to temperature variation.

When PMMC is used as a voltmeter, the coil is connected in series with high resistance. Rest of the function is the same as above. The same moving coil can be used as an ammeter or voltmeter with an interchange of the above arrangement

The galvanometer is used to measure a small value of current along with its direction and strength. It is mainly used on board to detect and compare different circuits in a system.

What are the different reasons that cause an error in PMMC?

Related Read: The Problem of Single Phasing in Electrical Motors

Can PMMC be used to measure AC?

If the frequency is low enough, the PMMC with the addition to a rectifier can be used to measure AC which converts the measured quantity into a dc current typically less than 1mA. Add an appropriate scale and you have a meter.

What will happen if I use it with high-frequency AC?

If the frequency of ac is high, the meter just vibrates in and around the zero value (preferable to verify with a centre zero meter), and finally stops responding to ac

What are permanent magnets made of?

Permanent magnets are made of special alloys such as :

Related Read: Minimize the risk of electrical shock on a ship.