It is said that waste management on board ship is technically a full-time job for the ship’s crew. The waste produced by some types of ships can go in thousands of tons on daily basis.

The sewage waste produced by a ship depends on the number of crew members and the type of ship. A large cruise ship can produce about 170,000 gallons of sewage on a daily basis. On an average of 0.01 to 0.06 m3 of sewage is produced per person in a day.

The Sewage waste produced on the ship can further be divided into two categories; Blackwater and Grey Water.

Together they are called as wastewater.

The black water comprises the following wastes produced on a ship:

– Waste generated from the drainage of a medical dispensary, sickbay, etc. via washbasins, washtubs and scuppers located in such premises

– Drainage from the cargo hold of living animals; or other wastewaters when mixed with the drainages of such spaces

The Grey Water produced on Ship comprises of:

– Waste generated from the drainage of cabin showers, bath and washbasin drains

– Waste generated from the drainage of laundry

The untreated sewage contains a concentration of nitrates, phosphates and organic matters. This will contaminate the water bodies such as lakes, rivers, and the sea as the bacteria in the untreated sewage are strong and can consume oxygen at a very high rate from the surroundings, making it difficult for the natural fauna of the aquatic environment to sustain.

The sewage waste discharge from the ship is regulated under MARPOL Annex IV. The regulation states that:

– Every ship of 400 GT and above which is engaged in international voyages, and carrying minimum 15 persons onboard must be equipped with either a sewage holding tank of appropriate capacity or an approved sewage Treatment Plant (STP) or both

– The sewage discharge from the ship is allowed if it has an approved sewage treatment plant, which can treat the raw sewage and discharge comminuted and disinfected sewage. With this arrangement, the discharge is allowed at a distance of more than 3 nautical miles from the nearest land when the ship is proceeding with a speed of 4 knots and above

Where:
DRmax is maximum permissible discharge rate (m3/h)
V is ship’s average speed (knots) over the period
D is Draft (m)
B is Breadth (m)

The most recent amendment for MAPOL annexe IV was enforced in January 2013, wherein, the Baltic sea area has been adopted as the first special area for sewage discharge regulation. This regulation targets passenger ships, which are the major cause of sewage-related pollution at sea and in coastal water bodies.

This regulation bans the discharge of untreated sewage out at sea in the Baltic area region. The untreated “raw” sewage produced on the ship can either be treated in an STP before discharge or the collected sewage can be transferred to the shore facility.

The sewage treatment plant installed on a passenger ship, intending to discharge sewage effluent in Special Areas, should additionally meet the nitrogen and phosphorus removal standards when tested for its Certificate of Type Approval by the Administration.

The discharge requirements for Special Areas in regulation 11.3 of MARPOL Annex IV for the Baltic Sea Special Area shall take effect:

– MARPOL Annex IV does not address those vessels carrying fewer persons, which can be ships and ferries plying in domestic waters. However, there are several smaller vessels around which are discharging wastewaters that are not subject to these legal regulations

– Tourism/recreational vessels such as yachts and small boats are also not covered under the MARPOL regulation. In fact, such vessels contribute to a good percentage of marine pollution, especially in countries with a high number of tourists

Arrangement to Treat Sewage On Ships:

1. Holding Tank: The holding tank is usually fitted irrespective of the treatment equipment available on the ship. The operation of the ship, its voyage and the total number of crew onboard ships are taken into account to determine the capacity of the sewage holding tank. The holding tank shall have a means to visually indicate the amount of its contents.

2. Comminuting and disinfecting equipment: Ships can have the equipment, which comprises of grinder-cum-filter that breaks the sewage into smaller particles. The filter separates the solids and liquids from the “grinded” sewage. Chemical treatment is done to disinfect the “grinded” sewage sludge (solid), which is then retained in a small tank. The liquid effluent which is separated from the sewage is disinfected using chemicals, which are again filtered using fine filters. The liquid effluent which is free from solids and any bacteria can be re-used for flushing of the toilets. The solid sludge is then given to the shore retention facility.

3. STP: A ship can also be fitted with an approved sewage treatment plant (the most common type uses biological or aerobic digestion based system). The biggest advantage of using STP is that the effluent and treated sewage can be discharged anywhere into high seas. 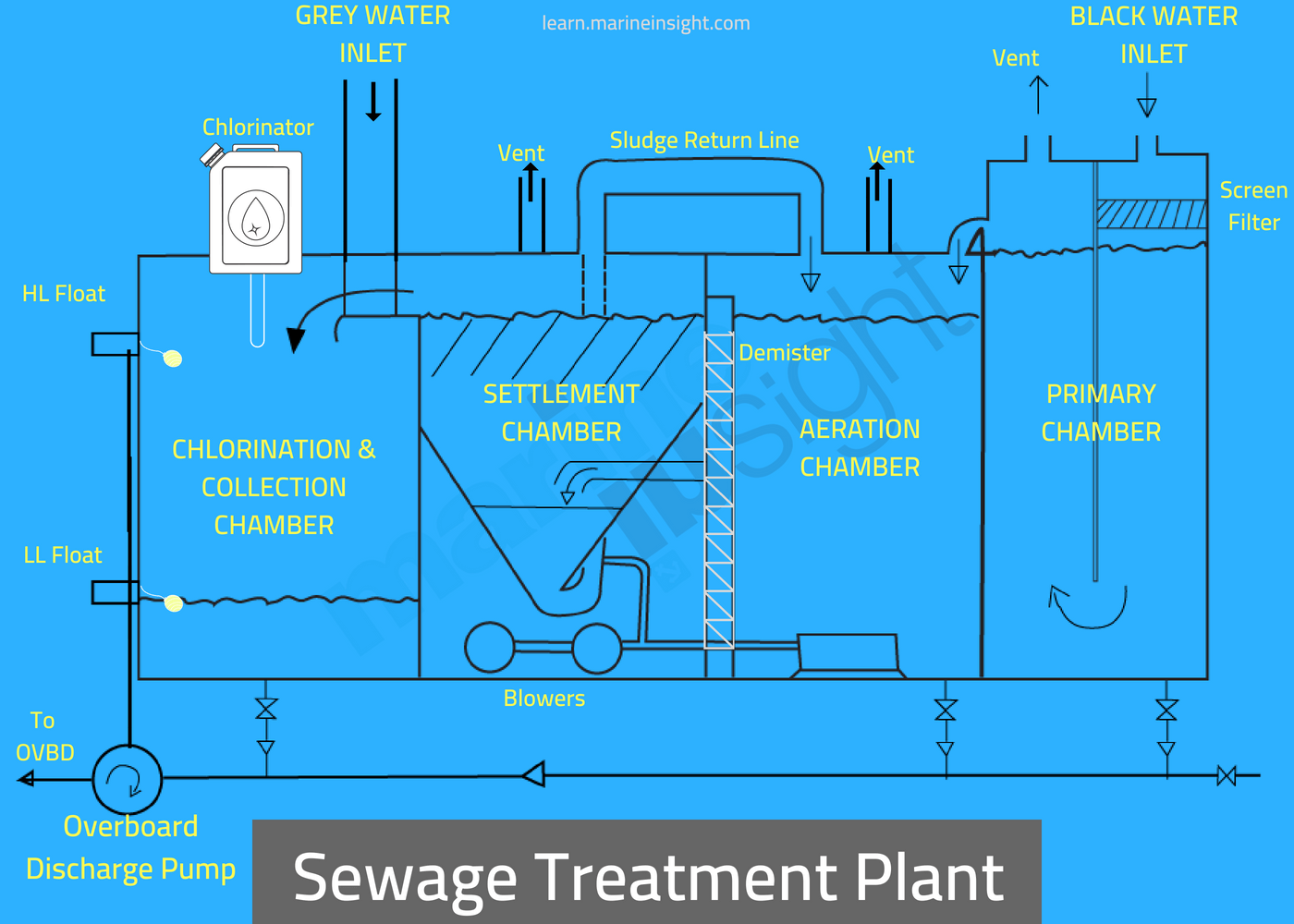 Related Read: Starting and Stopping of Sewage Treatment Plant on a Ship

Most Common Issues With Sewage System:

The ship may be fitted with a sewage holding tank or a sewage treatment plant to comply with the MARPOL Annex IV norms. Following are the most common problems faced by the ships’ crew while using the sewage system:

One of the biggest reasons for the problem in the sewage treatment plant is “an untrained crew”. It may happen that some of the crew members had experienced only of holding tanks from there previous ships and the current ship has a biological STP.

The master should ensure all the ship staff is trained on do’s and don’t of using the toilet (for e.g., not putting any non-biodegradable things, not cleaning the toilets with unapproved chemicals or washing powders etc.)

What PSC inspects in sewage system?

Whenever a ship arrives in a port, an inspector representing the port state may inspect the ship for any deficiency. The most targeted area by any PSC authority is the ship’s pollution prevention system, which also includes the sewage system.

The PSC surveyor may check the following things:

1. STP is operated correctly by the ship’s crew
2. All the crew members know the international and local regulations
3. The sewage discharge valve is shut and sealed/locked in port
4. The internal chamber of STP is clean (no sign of metal wastage)
5. The safety management system onboard includes the steps for regular checks and maintenance of the sewage plant
6. The chlorine content in the effluent can be checked
7. Log of opening and closing of the discharge valve
8. The validity of the International Sewage Pollution Prevention Certificate

Those ships which are not fitted with sewage treatment plant do have a holding tank as a minimum requirement under MARPOL.

With a period of time, the tank will mostly have solid sludge which needs to be disposed at the shore. This is done by using international discharge connection (for sewage, sludge and bilge) from the ship-to-shore reception facility. A pipeline from the holding tank is provided to the connection with an isolating valve.

The dimension of a standard discharge connection is as follows: