It is a well-known fact that nearly 70% of the earth is filled with water in the form of different kinds of water bodies such as oceans, lakes and rivers etc.

All these water bodies, especially oceans and seas,  form an indispensable part of our existence as it has key roles to play in our everyday life.

This factor of indispensability has not only helped us tremendously but has also resulted in the exploitation of the oceanic resources without any second thoughts.

The careless human intervention has badly affected the oceanic ecosystem, threatening the existence of several other species on earth, including human beings.

Accidents such as the BP oil spill and Samarco dam collapse are the striking instances to see how badly human activities can destroy the rich ecosystem of water bodies.

Dumping sewage in the ocean has always been considered the cheapest and the easiest way of disposing of wastes.

The billions of tons of litter end up in the ocean each year reportedly bring 250 million tons of trash into the sea every year.

However, reports also suggest that littering makes the aquatic life in the oceans and seas worse these days.

Some of the materials emitted by the industrial wastes and sewage wastes contain materials like mercury, cryolite and DDT. 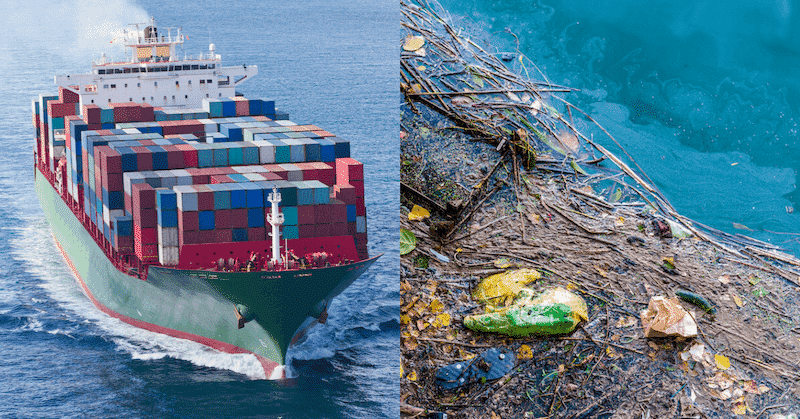 The scale and the magnitude of the ocean dumping are not just vast but are so huge, that our entire civilisation could be wiped out with the intensity of careless dumping.

The discharge of ballast water also causes the problem by way of ocean waste. Ballast water tends to proliferate and transfer organisms that debilitate the growth of naturally occurring fishes in a particular oceanic area.

According to researchers, many pollutants, almost eighty percent pollution, are released into the marine environment far upstream from coastlines.

The non-point pollution, which is a result of land runoff brings many wastage materials such as the debris of cars and boats into the sea every day.

Moreover, rivers during floods pick up harmful contaminants including fertilizers, petroleum, and pesticides, among others.

Studies have suggested that the presence of fertilizers in the ocean will result in the sudden explosions of marine algae, which can disrupt ocean ecosystems, and also the creation of dead zones in the waters.

Spilling of oil from tankers and offshore rigs in the oceanic area is also another example of sea pollution. Several of such oil spills from tanker ships after accidents, including Deepwater Horizon, Gulf War oil spill and Atlantic Empress, have shown us the extent of the damages the spills can do to the ecosystems.

The pollution through oil spills can have serious consequences for society, both economically and environmentally. Importantly, the main victims of oil spills are birds and mammals.

The Gulf of Mexico oil spill has caused problems to birds among the other marine creatures whose wings had gotten covered by the slick, causing them to die a slow and painful death.

Beaches covered with plastic wastes are not a rare scene in these days. Besides the large chunk of industrial wastes, the dumping of plastic is another biggest source of pollution as it slowly leads to adverse effects.

Materials like plastic are non-degradable which means they will not be absorbed and recycled. When oceanic creatures and even birds consume plastic inadvertently, they choke on it which causes a steady decline in their population. 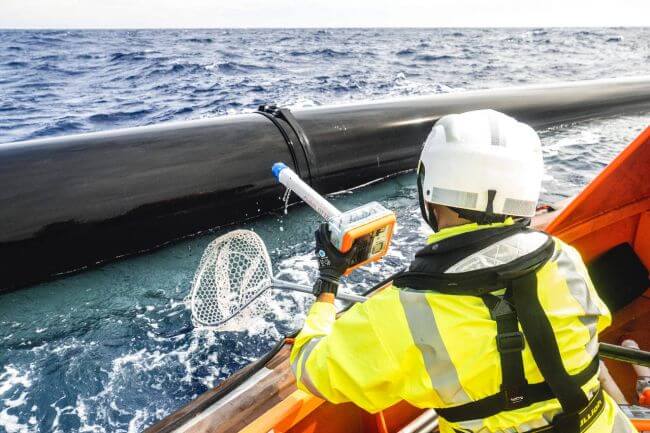 Image Credit: theoceancleanup.com
(A crew member retrieves a GPS drifter from the water.)

Activists say who suffer from the plastic debris are dolphins, sharks, turtles, crabs, and sea birds, among others.

The Pacific Ocean Garbage Patch is a very good example of plastic being hazardous and Islands like Henderson have transformed from the beautiful lands to Plastic Junkyards.

Mining under the ocean for silver, gold, copper, cobalt, etc. is another source of ocean pollution. Mines, where ores are drilled thousands of meters down, dispose of their wastes in the ocean, creating disastrous impacts in the marine life on the seabed.

Researchers, with limited scientific evidence, suggest that such activities help increase the toxicity, which will eventually put the ecosystem in the area under threat.

Besides these reasons, the aquatic life in the sea is also disturbed by several other factors. Recent studies have proved that the increasing noise pollution in the sea also creating threats to marine life.

In addition to the increased traffic, the loud sounds from sonar devices and oil rigs also making the situation worse.

According to researchers, the noise pollution will disrupt the migration and reproduction patterns of mammals like whales and dolphins.

The adverse effects of marine pollution are two-fold. Marine creatures and plants bear the brunt of the harmful substances in the dumped materials.

The wastes that are dumped into the oceans tend to have toxic substances, which soak in all the oceanic oxygen. This leads to a marked depletion of oxygen available to mammals and other fishes causing them to die in their natural habitat.

Every year, according to reports, more than one million seabirds are being killed by ocean pollution. In addition, thousands of dolphins and porpoises are dying every year due to increased human intervention.

The increased presence of plastic on the ocean surface has resulted in more serious problems. Since most of the plastic debris that reaches the ocean remains floating for years as it does not decompose quickly, it leads to the dropping of oxygen level in the water, severely affecting the survival of marine species.

Similarly, the presence of harmful wastes in the waters make impacts on the food habits and health of human being because it spoils the food chain and fails the reproductive system of fish and other aquatic beings.

Also, in case the dumping ground is closer to areas where fishing is the main scale activity and if the toxic substances get consumed by the fishes which get deposited and accumulated in their fat tissues, then the humans consuming these affected fishes can face unwanted complications.

In order to prevent further degradation of the oceanic environment and the eco-system, several laws and regulations have been enacted.

The London Convention of 1975 is one of the prominent ones, while other laws include the Clear Water Act (CWA) and the Ocean Dumping Act (ODA) which have been established by the United States to tackle the problem of pollution of the ocean.

Meanwhile, efforts are underway to clean up the mess that pollutes the oceans and its ecosystem. The Ocean Cleanup project, initiated by Dutch-born inventor-entrepreneur Boyan Slat, is attempting to remove plastic wastes from the sea and also preventing more plastic debris from entering the waters.

Started in 2014, the team now conducting research on the total quantity of plastic debris in the oceans, feasible recycling methods.