You are here: Home › Guidelines › Maintenance and Checks for Sewage Treatment Plant on Ship
TwitterFacebookLinkedInPinterestBuffer

An efficient running of a sewage treatment plant on a ship requires periodic maintenance and daily checks of the system. Failure to do so can lead to an output that cannot be discharged into the sea, blockage of pipelines, and even failure of some parts.

There are several factors that results in smooth working of a sewage treatment plant on a ship and this article enumerates all the maintenance and checks for that smooth running.

1. During daily rounds the pressure of the system should be checked and should be within the limits.

2. The air lift return should be checked to make sure the system is working properly. This is usually checked by the flow through the clear plastic pipe present on the installation. A clear sludge can be seen flowing through the tubes back to the aeration chamber.

3. Over a period of time, the sludge content in the aeration tank due to the recycling of the sludge from settling tank and fresh sewage increases. This sludge content or suspended solid particle is measured in mg/liter. The method of checking it is to take sample in a conical flask provided by the manufacturer and filling it up to 1000ml mark. The sample is then allowed to be settled and reading of sludge content is checked. 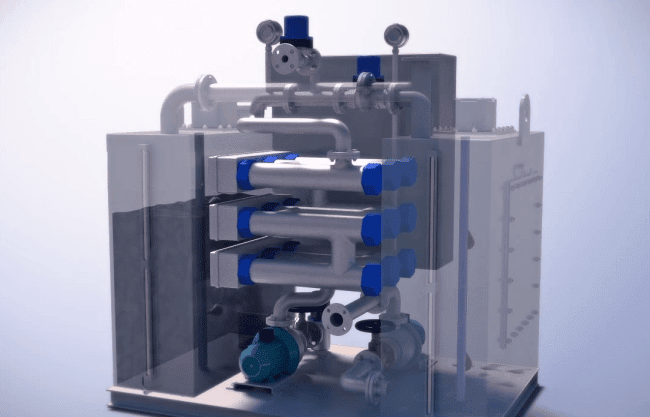 The sludge content should not be above the 200 mark, but if it is above the 200 mark, the tank has to be emptied for increasing the performance. In some ships this is checked by filtering the sample through a pre-weighed pad which is dried and re-weighed. This also depends from manufacturer to manufacturer, but is done every week.
4. Also the bio-pac is added every week to the plant to increase efficiency. The bio-pac contains aerobic bacteria which get activated when mixed with hot water.

strong>5. The chlorination of the sample should be between 1-5 ppm and accordingly the dosing has to be increased or decreased.

6. The level of biological oxygen demand (BOD) is also checked and it should not be above 50 mg/liter. The sample is checked by incubating the sample at 20 degrees and well oxygenating the same. The amount of oxygen absorbed over a period of five days is measured. This is done to check the oxygen required for full breakdown of sewage after it has been treated by aerobic bacteria.

7. The internal coating of the sewage treatment plant should be checked for cracking and blistering. If any kind of damage is found then we first need to empty the tanks and then necessary repairs to be performed. Special precautions should be taken before entering the tank as it may contain toxic gases that cause suffocation. The gases should be checked by dragor tube, a special tube in which samples of various gases are taken before entering.

When it is made sure of the absence of toxic gases, entry is made with the mask and gloves. After completion of work the area has to be disinfected. Later, hands should be properly scrubbed and overalls be thoroughly washed.

8. If the sewage treatment plant is fitted with UV disinfectant system instead of the chlorination system, the UV lamp has to be changed as recommended by the manufacturer.

9. High and low level limit switches should be checked for auto cut-in and cut-out of the discharge to over-board pump.

10. Make sure the stand-by sewage discharge pump is put on auto during the working of the sewage treatment plant.

In case of a blockage of the sewage line there is a connection for back flushing which uses sea water. This is to be used to unclog the sewage pipelines; however, it is to note that all valves are closed and only the necessary valves are open, for it might back flush from WC of the cabins.

Generally, stewards are instructed for using chemicals provided by various manufacturers such as Drew Marine and Unitor during washing so that no blockages of lines are caused. However, there shouldn’t be any overuse of these chemical as it would lead to killing of aerobic bacteria which will decrease the efficiency of the plant and other problems.  The amount of chemicals is to be as per manufacturer recommendation.

10 Ways to Identify Faulty Machinery Onboard Ships
How Maintenance Work is Done Onboard a Ship?
How the Water Locks of Panama Canal Work?
Procedure for Cleaning Fuel Oil Tanks on a Ship