Navigating a giant vessel is not at all an easy job and when it comes to situations of emergency, wherein the navigational officer has to make some quick decisions, the safety of the entire ship and its crew depends on that officer.

This is when automated systems are extremely useful.

BNWAS is one type of automated system used on ships. While the navigation of the ship is probably the most important aspect of delivering the cargo and the crew safely between two points, it must also be understood that the human component attached to navigation is open to errors and faults; with a sudden mishap with respect to the watchkeeper (sudden unavailability due to health reasons while on watch), the ship might be exposed to dangers and the BNWAS assists to tackle such a problem.

Bridge Navigational Watch & Alarm System – BNWAS is a monitoring and Alarm system which notifies other navigational officers or master of the ship if the officer on watch (OOW) does not respond or he/she is incapable of performing the watch duties efficiently, which can lead to maritime accidents.

The purpose of a bridge navigational watch alarm system (BNWAS) is to monitor bridge activity and detect operator disability which could lead to marine accidents.

The system monitors the awareness of the Officer of the Watch (OOW) and automatically alerts the Master or another qualified OOW if for any reason the OOW becomes incapable of performing the OOWís duties. This is achieved through a mix of alarms and indications which alert backup OOWs as well as the Master.

BNWAS warnings are given in the case of incapacity of the watchkeeping officer due to accident, sickness or in the event of a security breach, e.g. piracy and/or hijacking. Unless decided by the Master only, the BNWAS shall remain operational at all times.

There have been many incidents in the past wherein ships have collided or grounded due to wrong decision or inefficiency in taking a decision at the correct time.

If during an emergency situation, a navigational officer is not capable of handling that situation, it can lead to devastating scenarios. To avoid this BNWAS is installed on the bridge which acts similar to a dead man alarm in the engine room. 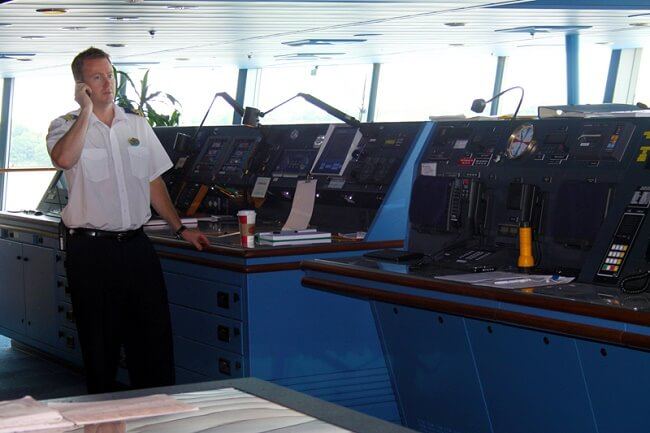 A series of alert and alarm is first sounded by BNWAS in the Navigation Bridge to alert officer on watch. If there is no response to the series of alarms, then BNWAS will alert other Deck officers, which may include Master of the ship, so that someone can come out on the bridge and handle the situation and tackle the problem.

The BNWAS primarily has three modes of operation:

Do you know more information that can be added to this article? Let’s know in the comments or email us at – info@marineinsight.com

How Bow Thruster is Used for Maneuvering a Ship?
Ash Plume From Volcano Eruption Hinders Satellite Imagery For Marine Navigation
How Marine Fenders Are Used For Ship Berthing?
10 Things to Consider While Using Auto-Pilot System on Ships