Cospas-Sarsat, with International Maritime Organization’s cooperation, came up with this project of Ship Security Alert System (SSAS). The basic idea is that in case of an attempted piracy effort, terrorist act, or any other incident which can be defined as a threat to the ship under the maritime security, the ship’s SSAS beacon would be activated, responding to which an appropriate law-enforcement or military forces would be dispatched for rescue. The Ship Security Alert System (SSAS) beacon and the Aircraft Transponder Emergency Code 7700 are operated on the fundament of similar principles. 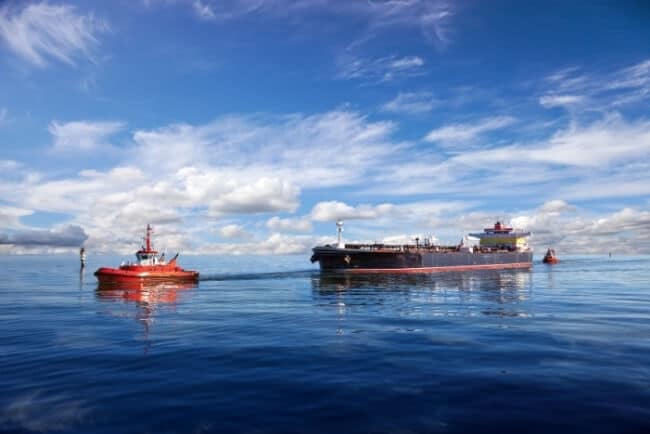 The SSAS is a type of silent ship security alarm system which, when activated, does not issue any audio-visual signal on the ship or to nearby vessels or security forces. The alert in most cases is first received by the ship’s owner or an SSAS management third party, then passed to the ship’s flag state, and these receivers are obliged to inform the national authorities of the coastal states where the ship is sailing.

The Flag States decide who will be the initial recipient of the security alerts from the ships. The recipient may be one or more parties designated by the Flag State as competent authorities, which may include the Company (shipowner) or a SSAS manaegement third party. 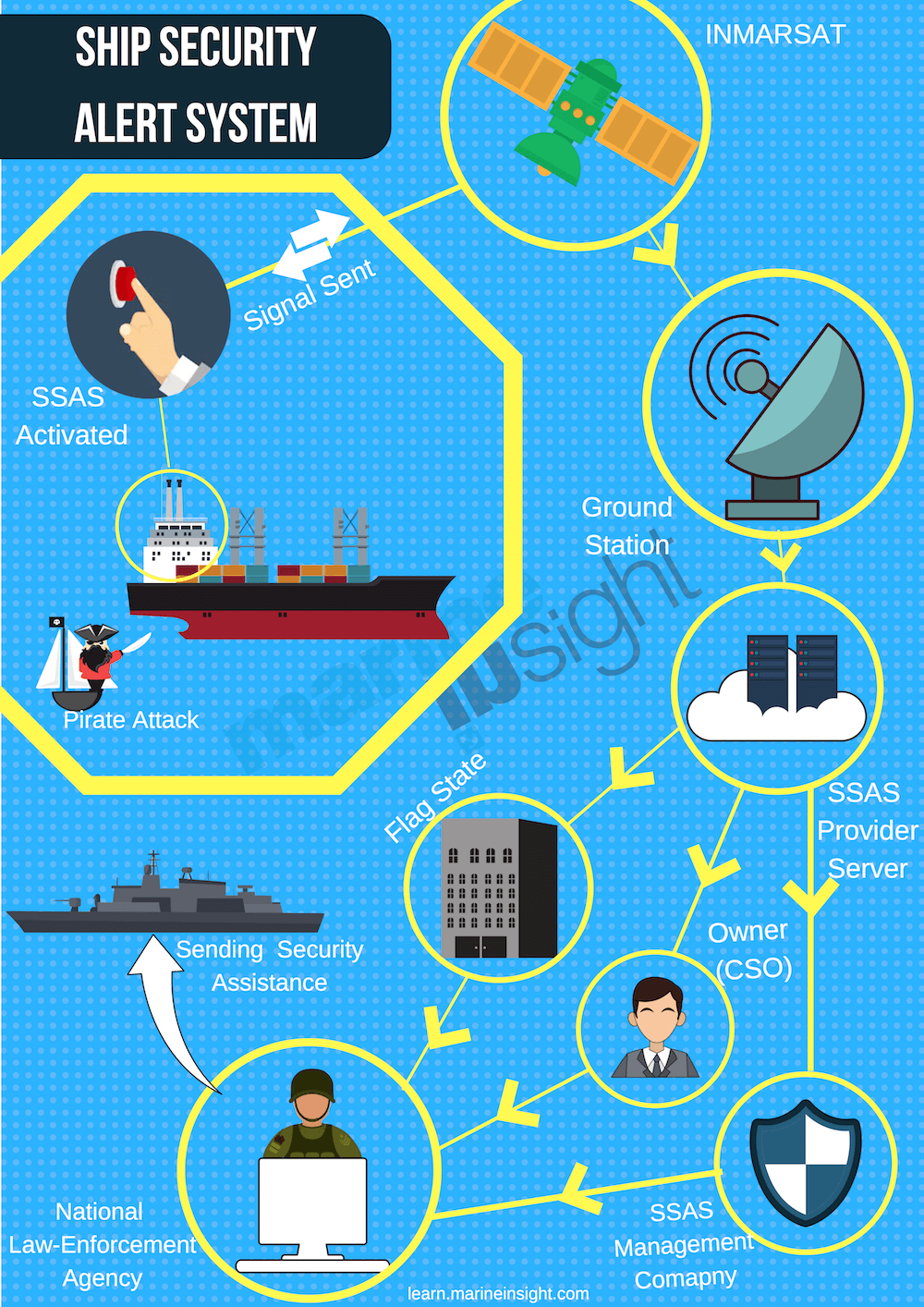 In December 2002, International Maritime Organization (IMO) adopted some changes within which Ship Security Alert System (SSAS) was determined in SOLAS Chapter XI-2, Regulation 6. It also required IMO to produce guidance on the implementation and instructions on the handling of covert alerts from SSAS instrumentation.

According to the international requirements regarding the security of ships and of port facilities, following ships must be provided with an SSAS:

Related Read: What Are The Security Levels Under ISPS Code?

The SSAS alerts are to be sent by the security staff, necessarily at routine priority, from the ship to its administration directly or other proper recipient designated by the Administration (flag state).

These routine priority SSAS alerts might be chosen by Administrations to have from their flagships addressed to Maritime Rescue Coordination Centres in their own region or to other targets such as ship owners or managers.

Satellite service of Inmarsat C, mini-C and D+ would help affirm the full accessibility of processing the messages of Ship Security Alert System (SSAS), while the existing outdated GMDSS would require an update provided by its manufacturers or agents.

SSAS solutions, which are available on the Inmarsat network, inevitably render more flexibility in the routing of SSAS alerts.

In accordance with the requirements of the IMO, these alerts could be sent to any destination, which might be a rescue coordination center, or a national security organisation or the shipowner or any other third-party organisation but necessarily selected by the flag administration.

The security staff can deliver the Ship Security Alert System (SSAS) to fax, email, telex, GSM phone, or even to other Inmarsat terminals for the sake of ship security complying with the legislation specified in Regulation 6.

As per the regulation, minimum two security alert buttons must be provided on the ship, one being located on the bridge and the second one should be located in any other prominent position (for e.g. Accommodation). The location of the switch must be known to all the ship’s crew.

The switch must be provided with a protective latch cover, to avoid misuse or accidental operation of the vessel. When the ship is at dry dock and if any work is being carried out near the SSAS button, proper instruction must be given to the person involved in that area for not touching/operating the button. In dry dock or layups, the latch can be locked temporarily, with the key kept at an accessible location and known to Master and the Ship Security Officer. During normal operation, the safety cover should never be locked.

When the Ship Security Alert System is Activated, following details will be sent to the administration:

The responsibility of the Signal Receiver:

Related Read: What are the Duties of Ship’s Company Security Officer (CSO)?

Related Read: What Are The Duties Of Ship Security Officer (SSO)?

Annual check of complete SSAS system must be performed (usually done during annual radio equipment survey) and also during the renewal or intermediate inspection of ISPS certificate. The checks to be performed as per the Ship Security Plan.

The unit should have the option to test the alarm internally when the flag state representative is onboard. 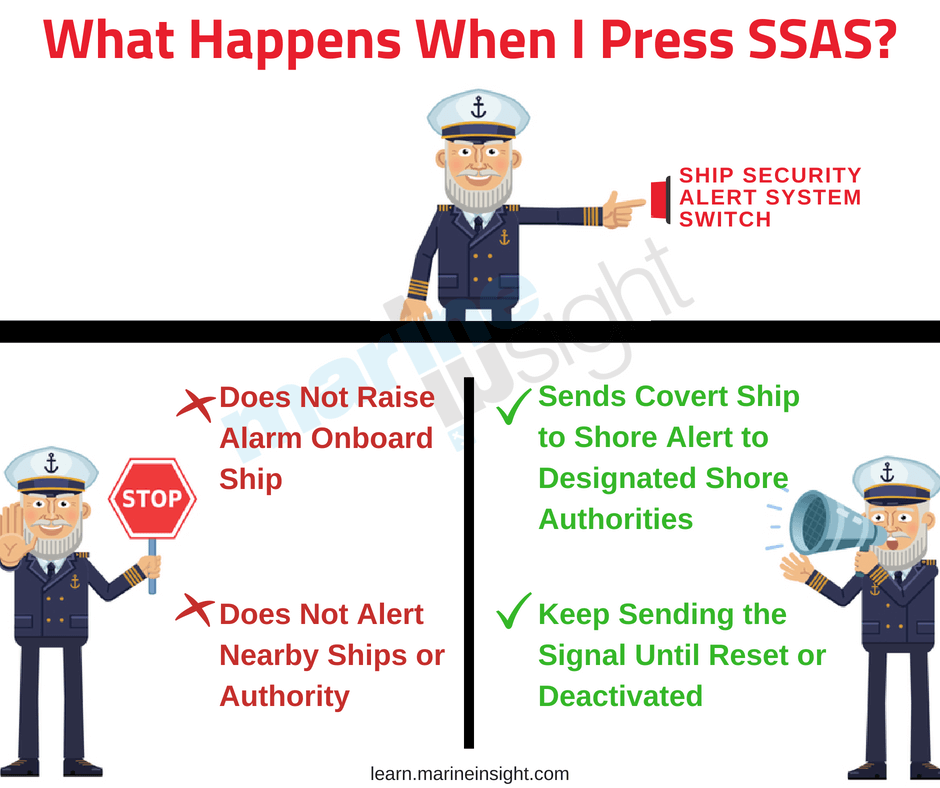 IMO: Promoting A Whole Of Government Approach To Maritime Security
IMO Appoints Special Advisor On Maritime Security
No Information On Kidnapped Seafarer From MV Tampen After 11 Days Of Pirate Attack
Gulf Of Guinea Is World’s Piracy Hotspot With 95% Seafarers Kidnapped