In this article, we will list and discuss different types of SOLAS approved fire extinguishers on board ship (Portable and semi-portable fire extinguishers), which are installed at different parts of the vessel according to the type of fire sources present in that area, their use and also answering the most frequently asked question which –  what’s in a fire extinguisher?

A portable fire extinguisher is one of the most convenient and speedy ways to fight the fire on ships.

Related Read: Basics of Fire Prevention On board Ships

Class A: These types of fire extinguishers are used in fires which are a result of the burning of wood, glass fibre, upholstery, and furnishing. Usually, Water, DCP and Foam fire extinguishers smother the Class A fire by removing the heating factor of the fire triangle. Foam agents also help in separating the oxygen part from the other aspects.

Class D: Fires occurring as a result of combustible materials such as magnesium and aluminium are extinguished by this type of fire extinguishers. These elements burn at high temperatures and will react vigorously when coming in contact with water, air, carbon dioxide and/or other chemicals.

For extinguishing this class of fire, Dry Powder extinguishers are used which is similar to dry chemical besides they extinguish the fire by isolating the oxygen from the fuel or by eliminating the heat factor of the fire triangle.

The dry powder extinguishers are only used for class D fires and they cannot be used for other classification of fire on board ship.

Class E: This type of fire extinguisher on a ship is used for subsiding fire resulting from any of the above-mentioned materials along with high voltage electricity. Hence, if a portable extinguisher with a conductive agent is used for fighting the class E fire, it may lead to a risk of shock to the operator. CO2 or DCP portable fire extinguisher is used in such fires. 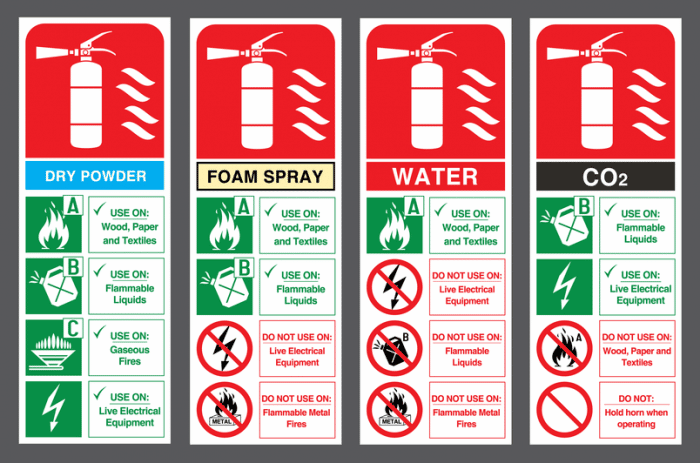 Type of Portable Fire Extinguisher used in a ship:

When it comes to choosing a ship fire extinguisher, we need to keep in mind different types of combustible material and fluids which are located in different parts of the ship along with the fire extinguisher reaction with the source of a fire. Based on the above-mentioned classification, portable fire extinguishers are classified and used according to the classes of fire as per IMO.

A soda acid type fire extinguisher is recommended for putting out fires which involve burning of class A fires. The soda acid extinguisher can be found in the accommodation area of the ship.

Sodium bicarbonate (soda) and sulphuric acid are the prime components of the extinguisher. They combine to form a chemical reaction to produce carbon dioxide gas, which is used to smother the fire.

Related Read: Dos and Don’ts to Avoid Fire in the Ship’s Accommodation Area 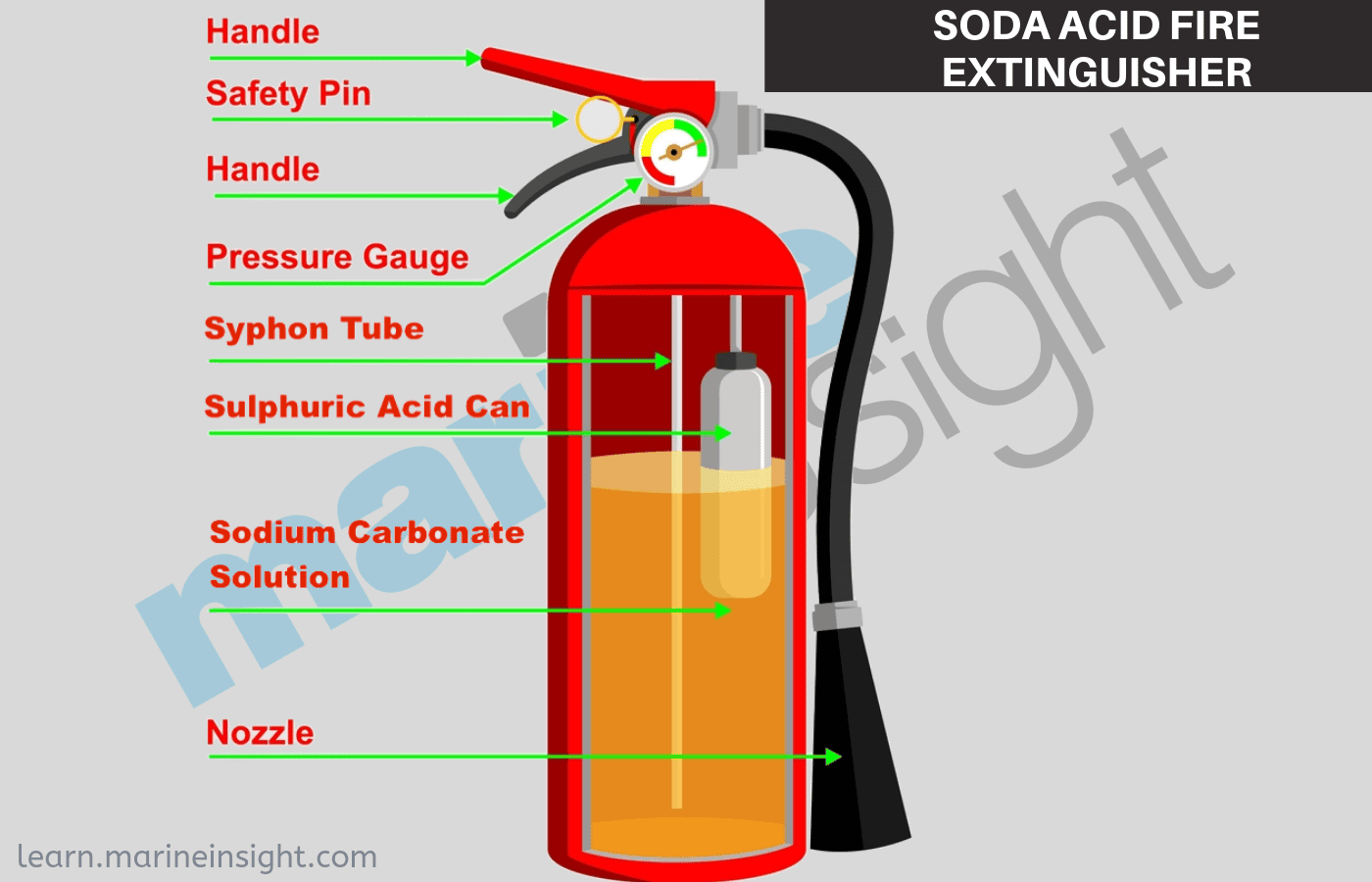 The arrangement of the extinguishers comprises of a container which holds the sodium bicarbonate solution. A small glass bottle (phial) containing sulphuric acid is placed below a plunger mechanism, which is covered by a safety glass along with a screw and cap at the top.

When the plunger is struck hard, the glass bottle breaks, resulting in mixing of acid and soda, a chemical reaction takes place which produces carbon dioxide gas.

The carbon dioxide gas pressurises the space above the liquid (used for extinguishing the fire) and forces it out through the internal pipe of the nozzle.

Note: As the CO2, which is used in soda acid fire extinguisher, may create a toxic effect in confined spaces, Soda Acid Extinguishers are now banned on ships.

To counter the A-Class fire, portable water type fire extinguisher of 9Ltr are used. The outer container is filled with water and fitted with a CO2 Cartridge (inner container) which forces the water out of the container with pressure. 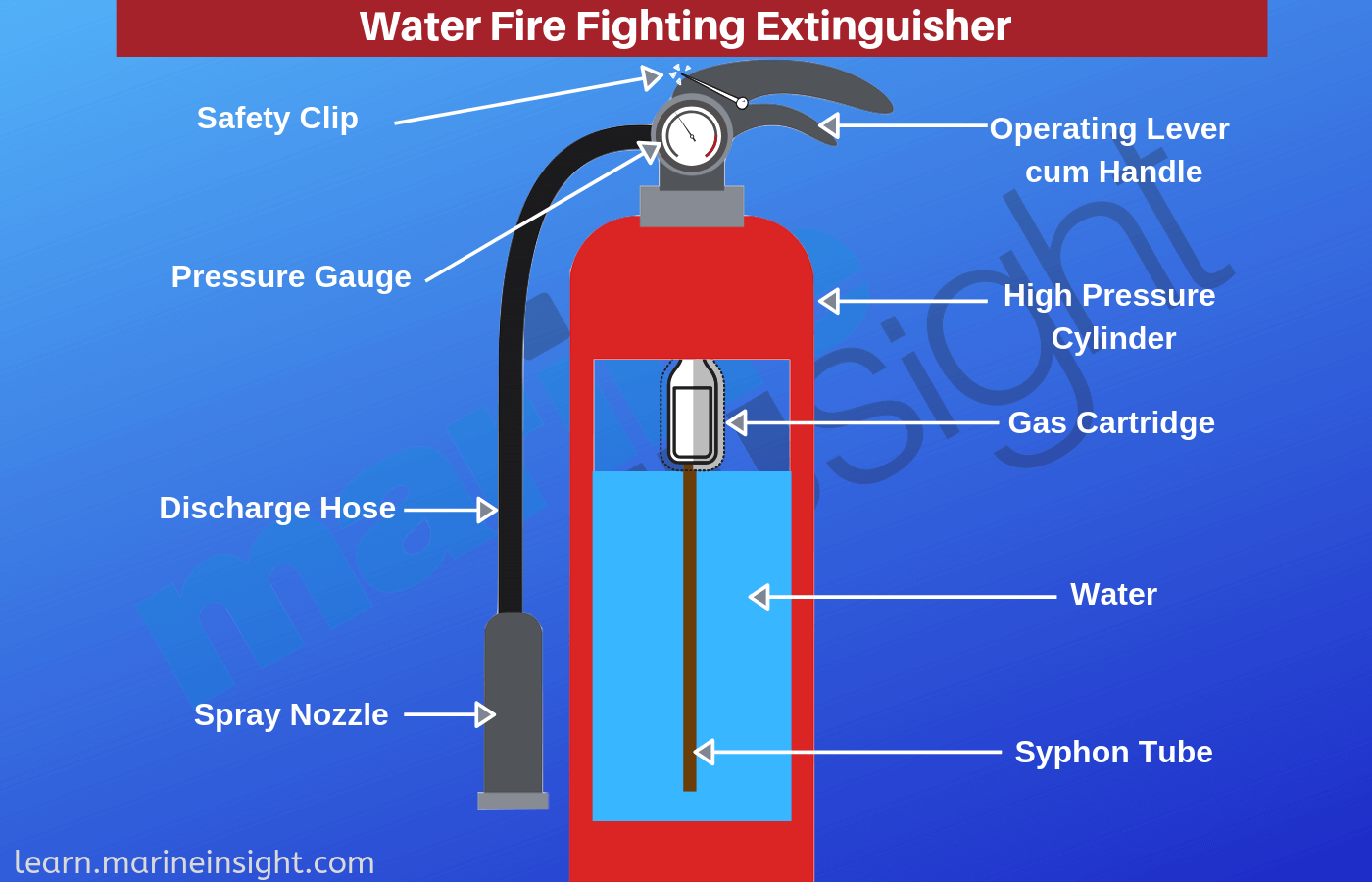 To operate the extinguisher, first, the safety pin/clip is released. When pressure is applied on the plunger, the CO2 cartridge ruptures and forces the water out of the extinguisher.

Foam extinguishers are used to extinguish Class B fires and are located near flammable liquids. There can be two types of foam fire extinguisher depending upon its contents- 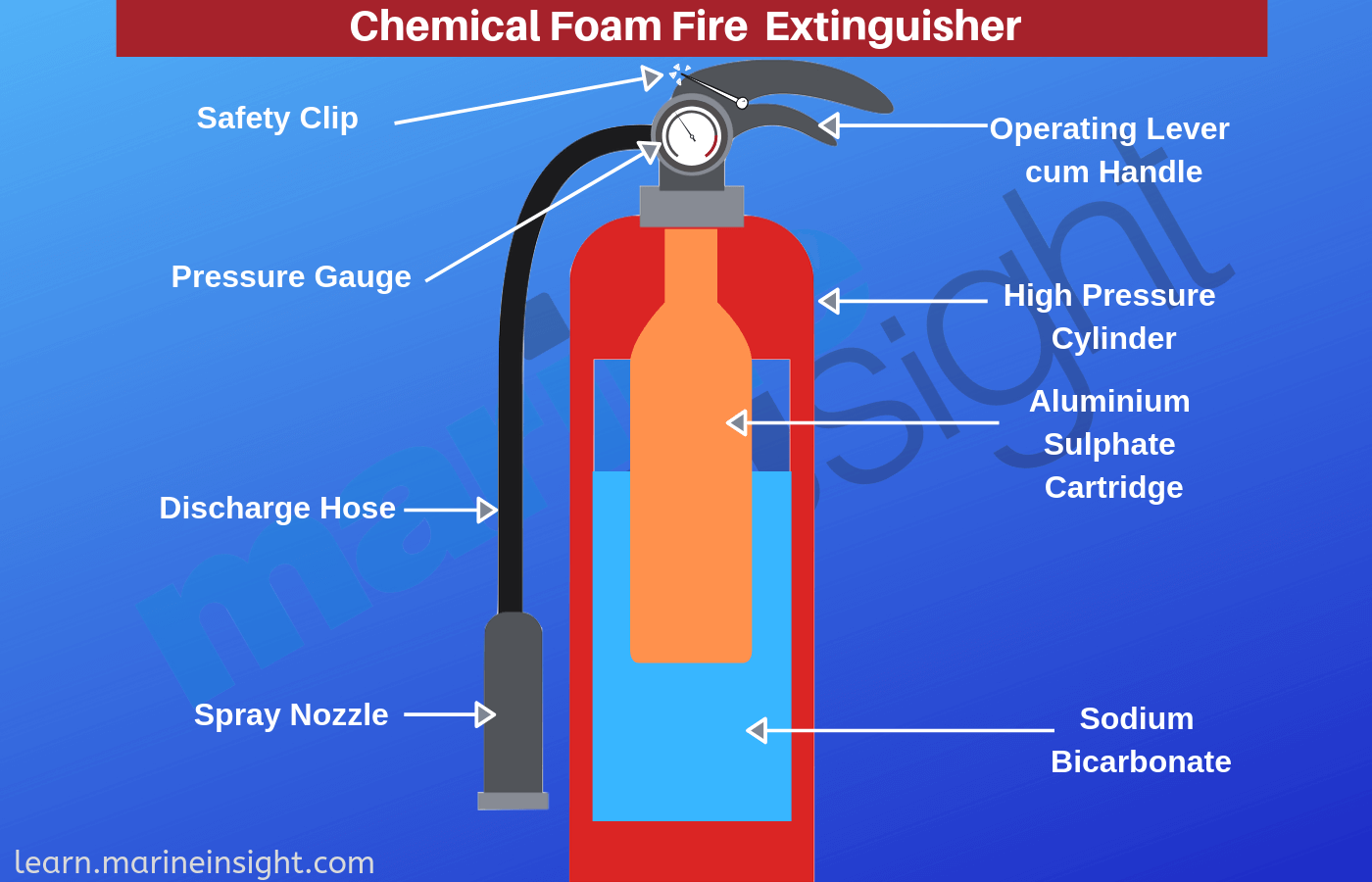 The inner container has a cap at the top which is kept in place by a plunger.

The plunger is turned to release the cap and the extinguisher is then inverted for both the chemicals to mix. Carbon dioxide is produced from the chemical reaction which pressurizes the container from inside and forces out the foam.

This type of portable foam fire extinguisher chemical equation is shown below:

Note: Chemical Foam Extinguishers are now banned on ships because of the poisonous effect which the gas can create. 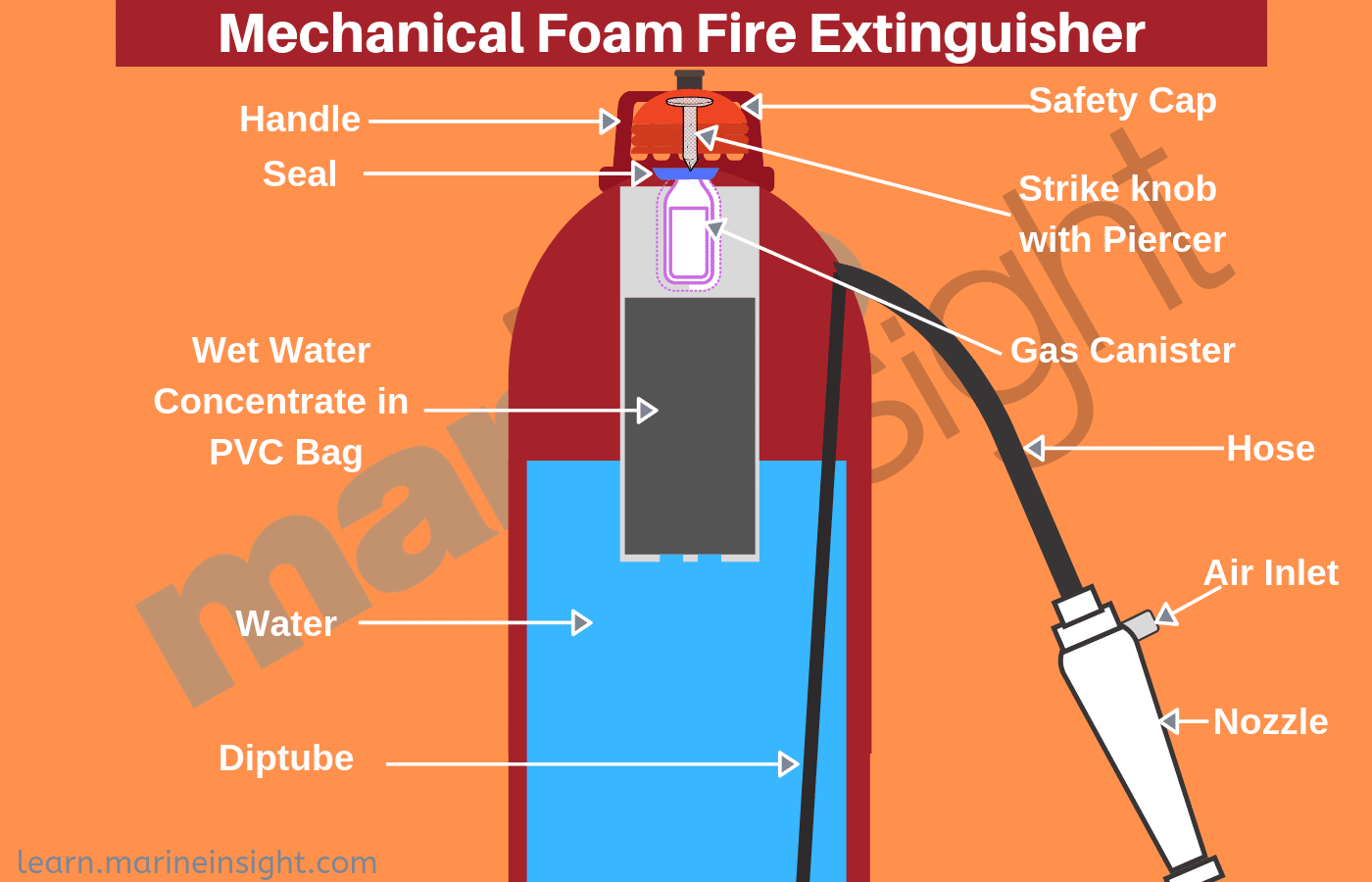 The central container has a plunger mechanism at the top which when depressed releases the carbon dioxide and allows foam and water to mix.

The foam and water come out of the nozzle, creating mechanical foam. This extinguisher is operated in an upright position.

Carbon dioxide extinguishers are mainly used for class B or class C fires. They are not used for accommodation areas and confined spaces because of the gas used in lethal. These are widely used as engine room fire extinguisher. 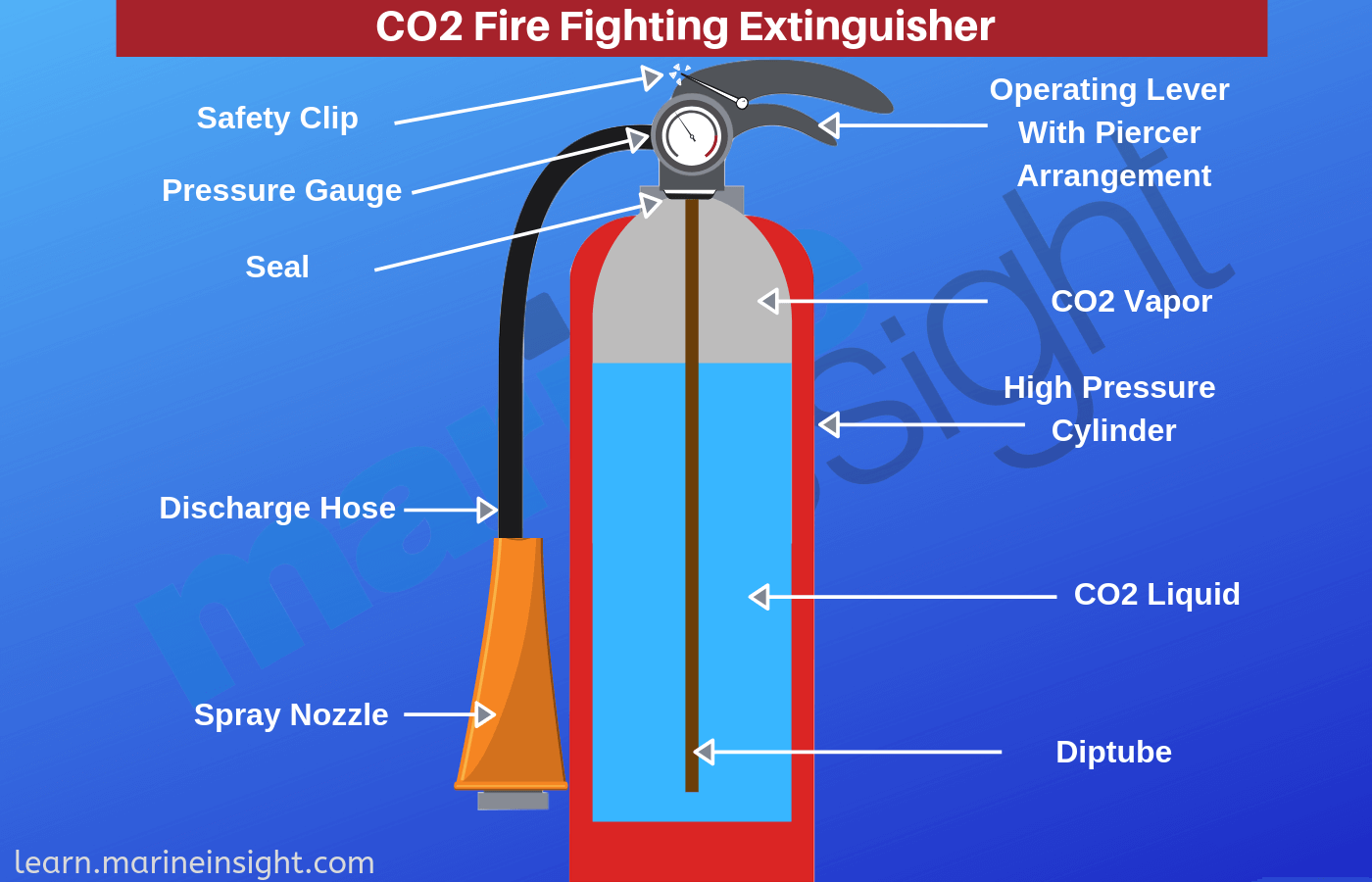 Carbon dioxide is stored in liquid form under pressure. A central tube acts as an outlet for carbon dioxide gas. A plunger attached to a bursting disc at one end and a trigger at the other is used to release the carbon dioxide gas. The liquid changes to gas as it comes out of the extinguisher through a hose.

Related Read: 12 Things You Must Do Before Operating Ship’s CO2 Fire Extinguishing System

Sodium bicarbonate powder is used to extinguish almost all types of fires. It is mainly located in the engine room and near electrical equipment. 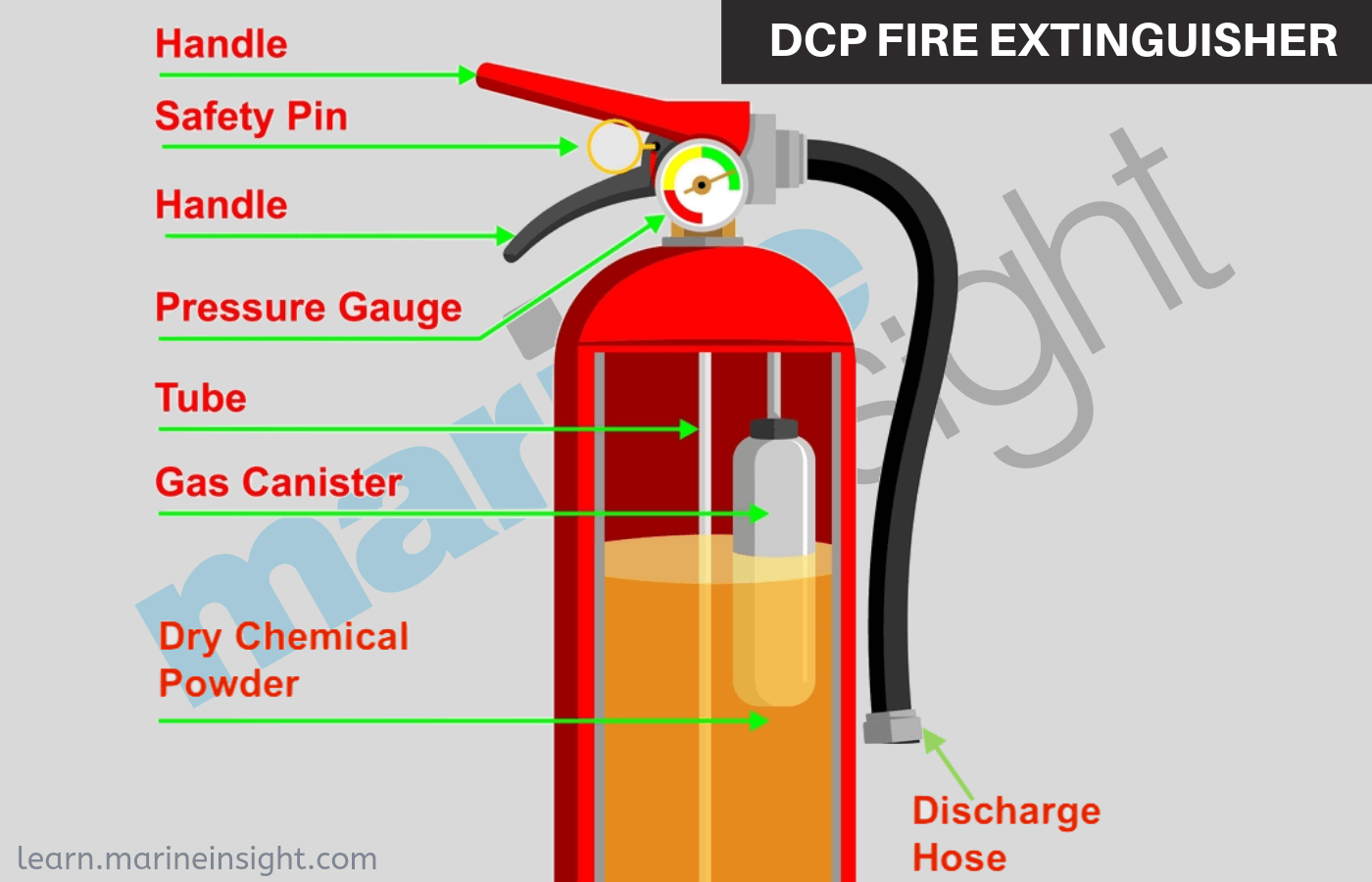 A small container with carbon dioxide is placed beneath the plunger mechanism.

When the plunger is pushed, it releases the carbon dioxide gas, which in turn forces the dry powder out of the discharge nozzle. 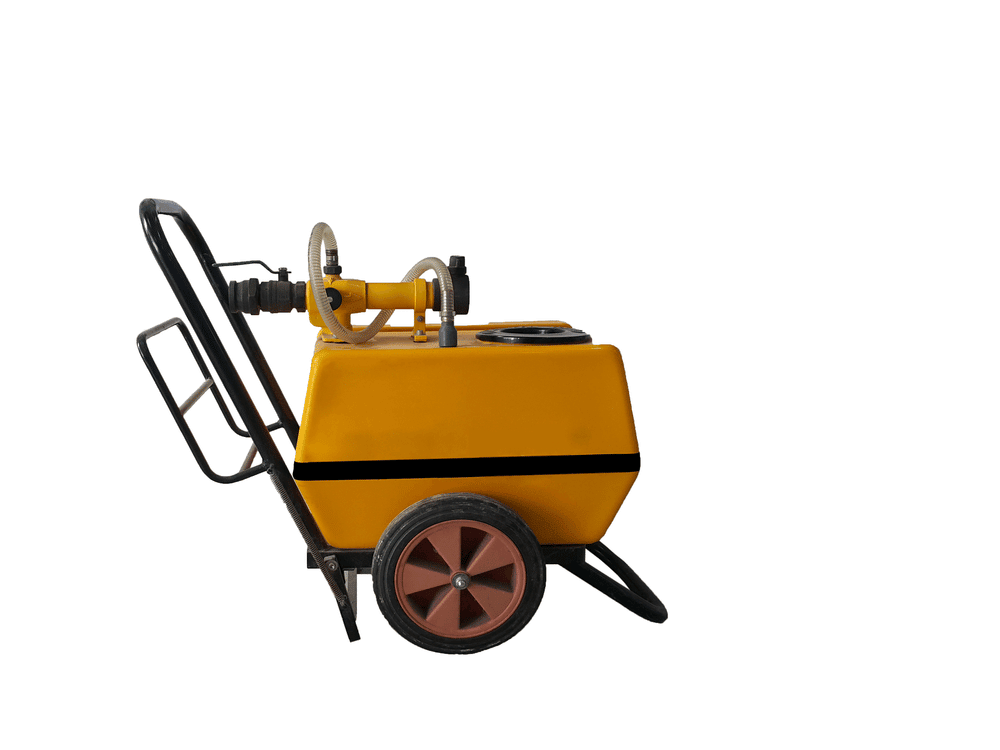 These extinguishers are kept onboard on that location which has a higher risk of fire. E.g. The semi-portable type fire extinguisher is located near the boiler and incinerator in the engine room and also in the galley. The galley fire fighting system in a ship may include a small CO2 fixed firefighting setup apart from the portable galley fire extinguisher.

The below diagram shows the operating procedure for a portable fire extinguisher: 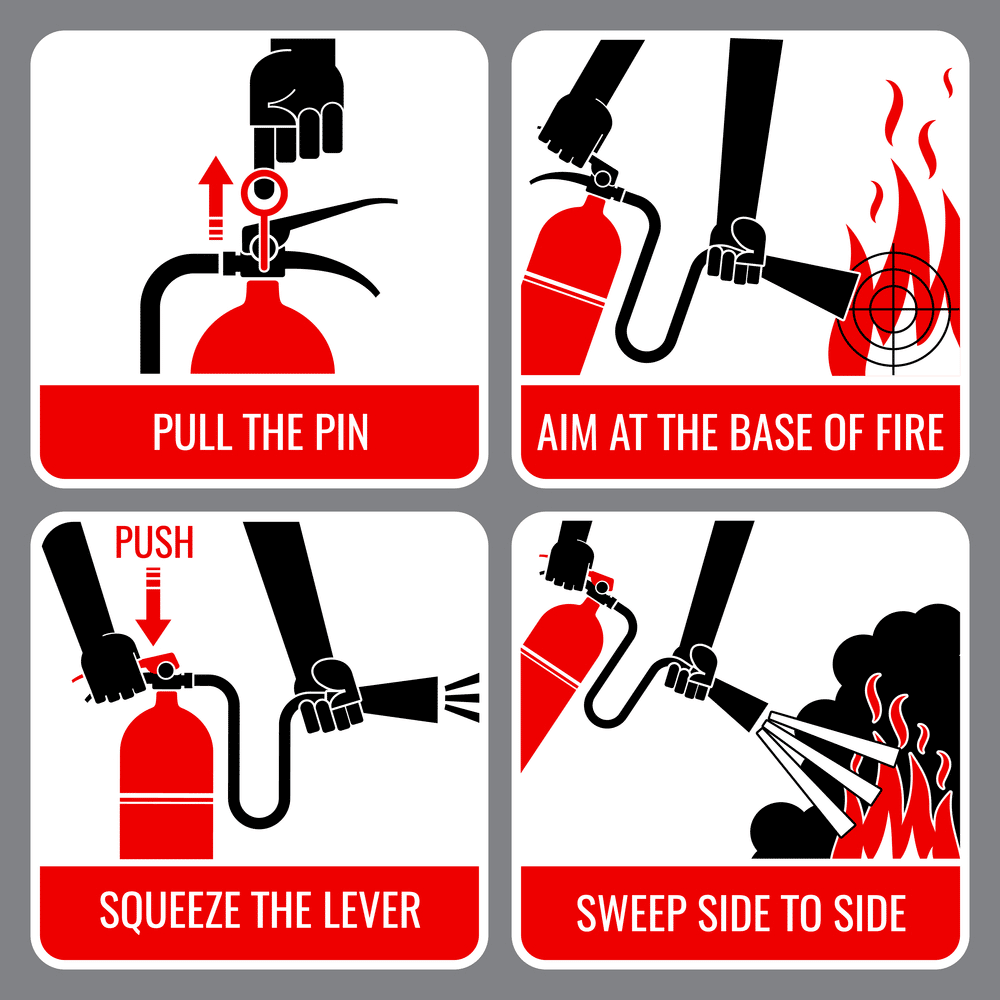 This type of portable fire fighting unit consist of a portable foam tank carrying foam-forming liquid of at least 20l capacity with foam applicator connected to an inductor type nozzle designed to be connected to the fire main by a hose. One spare tank of foam making liquid is also provided.

The nozzle shall be capable of producing the rate of at least 1.5 m3/m of foam for extinguishing an oil fire,