You are here: Home › Marine Safety › Can Bacteria Cause Fire on Ships?
TwitterFacebookLinkedInPinterestBuffer

Fire, a constant threat to everyone on board ship, is the last thing a maritime professional would want to face while at the sea.

However, in spite of the stringent safety measures and various techniques that emerge everyday to combat fire on ships, it’s still not possible to completely eradicate the possibilities of fire.

We know that a fire requires heat, fuel and air to sustain itself (chain reaction). Moreover, there are numerous causes of fire, which have been identified, recorded and cautioned about. 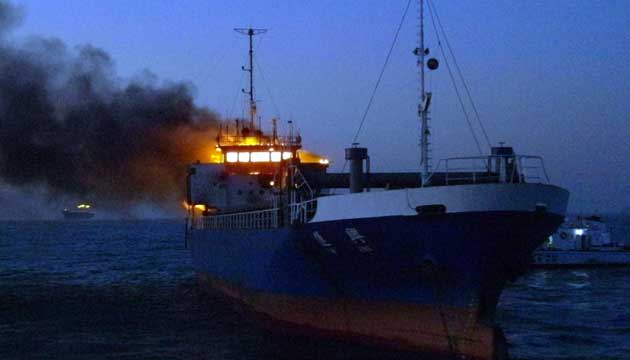 But here is an incident of fire which took place on board a ship and had the most unusual medium as its source.

It was a fine calm morning on a cargo ship and the engineers were busy with their routines.

The chief engineer was also on his regular rounds after tea time. On the cylinder head platform, as he was checking the parameters and engine components; he observed some hazy white patches of smoke emerging out of a partially covered waste bin.

He attempted to open the cover to check what was going on inside the bin. As he opened the bin, a flame of fire broke out due to fresh air ingress into the bin. He immediately raised the fire alarm and took a nearby dry powder extinguisher to extinguish the fire.

The fire was very small one and thus was put out very easily. After everything settled down, an investigation was made to analyze the cause of fire. The chief engineer suspected that other engineers or engine crew might have dropped an unquenched cigarette butt in the bin. But when he enquired, to his astonishment, none were smokers.

As the next step, the Chief Engineer immediately informed the Master about the incident with investigation under way. However, no one onboard ship could find the reason for that fire.

The chief engineer asked the oiler, who was the in charge of that particular platform for clearing out the garbage from the bin on daily basis. The oiler explained that he followed the regular practice without any change. The oiler dumped milk packs, oily rags, some waste bread and other eatables, cotton wastes, etc. into that bin.

At the end of the day, the bin was emptied and the contents were incinerated the next day. The master informed the management regarding the incident, and the management decided to send the samples to the laboratory ashore.

It took nearly a month for the lab to come up with the reason for the fire. The entire sample was divided into 25 to 30 equal smaller samples, with each kept at a certain temperature to observe its behaviour.

The samples which were kept at a temperature of 20 to 30 degree Celsius did not show any considerable change in its behaviour. However, the samples which were kept at 40 degrees and above showed a strange behaviour. Even after the heating element for the sample was turned off, their temperature went up rapidly to more than 90 degree Celsius. Later upon testing, it was found that the steep increase in temperature was due to a peculiar kind of bacteria called the “thermophilic bacteria”.

The thermophilic bacteria (Thermophile) grow with liberation of heat at the right atmospheric conditions. It requires hot and humid atmosphere to multiply. When it multiplies, it liberates heat. This was the reason the oily cotton rags, which were inside the bin caught fire.

The result of this peculiar investigation was sent to the company and a caution message was sent to all ships regarding the incident.

It is a good practice to have a garbage management plan and to follow it strictly on board every ship. A practice of segregating garbage, for example oily rags in a separate bin, food waste, metal scraps, ash, batteries, etc. assigned to different bins and colour coded is mandatory these days in all ships. It is also a good idea to clear of all the bins before unmanning the engine room.

Basics of Fire Prevention on Ships

What to do in case of purifier room fire?

How is ISM Code Implemented On Ships?
7 Dangerous Diseases/Disorders Seafarers Should Be Aware Of
10 Points To Consider When Preparing For Safety Equipment Survey On Ships