Accidents on ships are mainly a result of unsafe practices that are followed by the ship’s crew.

Many a times, while working on ships, we are aware that a particular action, which is being taken by us, is unsafe and yet we neglect our conscience and carry on with the same.

Blame it on negligence, laziness, or sheer will to complete the work as soon as possible, in every aspect of live we are looking for some or the other form on shortcut.

In this article, we have mentioned a very common situation, which most of us are familiar with. However, many of us might not be aware as to how it can turn into a life-threatening situation.

We are talking about working around – oily rags on ships. 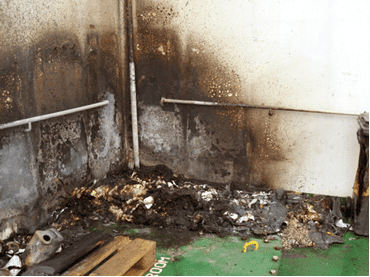 If you are an engineer officer, you might be familiar with a scene wherein maintenance of particular machinery is going on, and scattered around lies several oily rags. Quite familiar, right?

In this article, a real incident has been depicted in which oily rags lead to engine room fire.

This incident took place on a cargo ship, where the fourth engineer was assigned the task to clean the lubricating (LO) and fuel oil (FO) filters of auxiliary engine.

The fourth engineer started his duties, opened the fuel oil filter, and kept the elements on the floor plate along with oily rags scattered around. The rags made the area wet with fuel oil.

Once the fuel oil filters were opened, the fourth engineer opened the lube oil filters and again kept the elements on the floor. He then took the wire lamp, turned it on, and hung it on a hook on the bulk head.

However, while working, he accidentally pulled the wire of the lamp. The lamp fell down near the oily floor with the rags. Now as the lamp was without a glass cover or the protecting grill, the bulb broke on the impact. The hot filament of the bulb came in contact with the oily rags, which instantly caught fire.

The fourth engineer was stunned by the incident and got panicked. However, the experienced motor-man of the ship came to the rescue. He picked up a nearby fire extinguisher and extinguished the fire, thus preventing the fire from spreading.

The fourth engineer made a very common mistake – keeping his working environment hazard-free and safe. Moreover, he followed unsafe practice of keeping floor plates oily and not disposing off the oily rags after use.

It is important that officers take a proper look of the surrounding of their working area and clear off all the hazardous elements lying there before beginning their work. They should always follow safe working practices on ship – come what may!

Basics of Fire Prevention on ships

How to prevent fire in accommodation areas on ships

How to ensure personal safety in rough weather?

Shipwreck Survivor Secures Compensation With Union’s Support
8 Common Problems of Ship’s Incinerator Mariners Should Know
How Maintenance Work is Done Onboard a Ship?
The Role of General Average in the Maritime Industry