Since the inception of merchant ships, bulk carriers have been used extensively for transporting cargo across oceans.

Prior to the Second World War, most of these commodities were carried by general cargo ships, but as time progressed, bulk carriers came into being.

Loading arrangements in bulk carriers cause high shear forces at the end of the holds and that requires additional strengthening of the side shell in way of the bulkheads.

Hatches with large capacities are provided to facilitate rapid loading and unloading of bulk cargo; this is in place owing to the many voyages undertaken by a bulk carrier.

With the passage of time, bulk carriers have been improvised to enhance both the cargo carrying capacity and safety of the cargo and crew.

However, several maritime accidents in the past have involved bulk carrier ships mainly because of the failure of ship’s structure, which resulted from deterioration of the ship’s hull, corrosion, fatigue, effects of cargo, water ingress etc.

Throughout the late 1990s, the issue of the safety of bulk carriers received consideration from IMO and other regulatory bodies.

The up-gradation of the integrity of bulk carriers had more focus put on the structural hull details, stress experienced due to cargo operations, structural and protective coatings, cargoes, maintenance and inspection of the ship structure.

In order to safeguard from these factors, bulk carrier ships are now added to the enhanced survey program (ESP) along with oil tanker ships.

In this article, we mention some important points that help in improving the overall safety of the ship.

Corrugated bulkheads can be seen as a transverse arrangement on the inside of the cargo holds. The concave shape is achieved by the use of plate rolls or heat line bending.

The corrugated has a higher strength than a flat plate when subjected to bending moments during cargo operations or even at sea.

The corrugations are present to negate the need for vertical stiffeners as with other structures; removal of these stiffeners also reduce costs as well as the overall weight.

Reinforcing the corrugated transverse bulkhead installed between No.1 and No.2 cargo holds and the double bottom of No. 1 hold.

This ensures watertight integrity to be maintained at all times even when the side hold or bottom is damaged.

The water ingress alarm is in place seeing as the ingress of water may taint or corrupt the cargo/commodity being carried on a bulk carrier.

For example, rice or sugar when in contact with water causes tainting of the cargo rendering it unusable and therefore liable for rejection.

Checking and maintaining an active water ingress alarm in the cargo hold as per SOLAS requirement at all times.

For example, SOLAS states that “In each cargo hold, giving audible and visual alarms, one when the water level above the inner bottom in any hold reaches a height of 0.5m and another at a height not less than 15% of the depth of the cargo hold but not more than 2.0 m”.

Also, check and maintain the water ingress alarm in the area located at the forward of the cargo area.

It is advisable for the reader to go through the SOLAS Chapter XII Regulation 12 for a better understanding of this alarm system.

A complete hull survey of bulk carriers as per IACS condition to maintain the strength of the ship’s hull. This is done as per the ESP and ensures that the IACS standards are complied with.

Being exposed to the sea at all times, it is impossible to have a dry deck at any given second! However, what can be done is that the deck can be kept dry to an extent that is practically possible.

Protection from the weather in general and the spray is essential to the carriage of cargo on a bulk carrier. Increasing the Integrity of fore-deck fittings on bulk carriers to avoid the problem of deck wetness i.e. flowing water on ship’s deck due to rough weather, also known as green water loading.

A bulwark is the extension of a ship’s sides above the level of the deck. Not only does it fulfil the purpose of strengthening but it also prevents the outflow of water or, God forbid, oil!

The planking along the sides of a ship, above the upper deck and below the gunwale, also protect the crew from falling overboard.

Hatch covers are the primary arrangement for protecting the cargo being carried on board; also, to maintain the watertight integrity as well as to protect the cargo from the sea, sun and the weather in general.

During cargo operations in port (or at anchor), hatch covers are opened and closed often which means that they should be in optimum working condition.

The most common type of hatch cover is the McGregor hatch. Reinforce the hatch cover which is located at the forward of the ship within 0.25L, where L is the length of the ship. 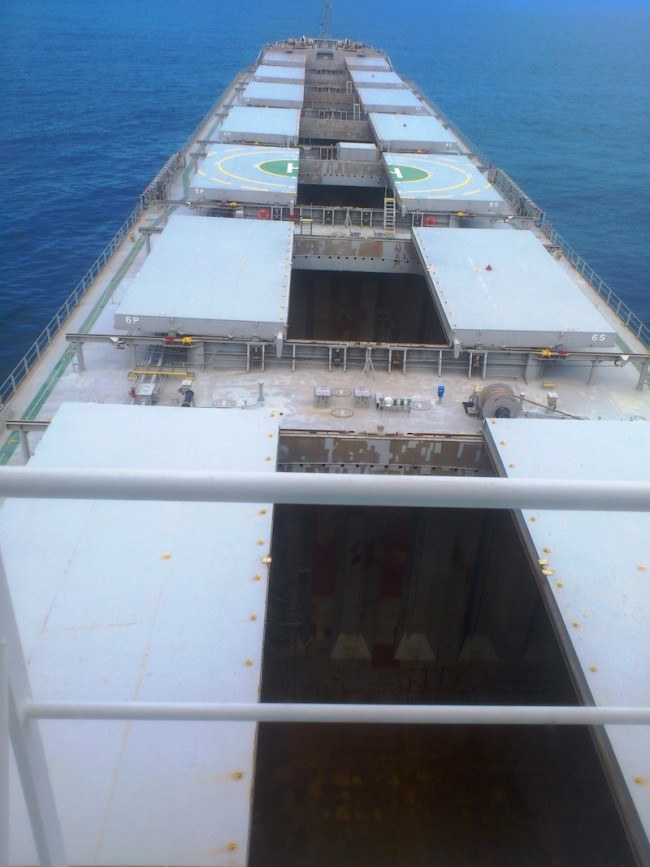 Maintaining water tightness of all the hatch covers to avoid water ingress. This can be done by the use of Ramneck hatch cover tapes that are additionally increased in the adhesive property by the use of a butane torch.

A fire hose may be used at high pressure to subject the hinges to a water jet at full force that can be used to determine the watertight integrity of the hatch.

Side shell frame to be double skin ensuring extra safety in case of structural damage. In layman terms, if one layer is compromised or breached, there is another layer to ensure that the hull is not entirely breached which might result in a lot of damage to the ship and its contents

A good anti-corrosive coating on the ship’s structure to avoid damage due to corrosion. The ship is subjected to great stresses from the sea which might result in causing the structure to reduce in strength.

Not just the hull, but the entire vessel is vulnerable to constant forces of nature (as well as internal stresses due to the cargo) which renders the anti-corrosive paint essential to the structural integrity of the vessel.

It is important to remember that whichever part is being painted must be de-rusted and cleaned prior to such application. Painting on top of rust is only going to add to the misery later on!

Aside from the launching and evacuation procedure, the system holding the lifeboat in places such as the davit, gripes and other such moving parts must be maintained regularly so that they do not get jammed when they need in case of an emergency.

There is ample work on the ship on any given day and it is not possible to adhere to everything all the time.

However, a planned schedule for the upkeep of all the above-mentioned aspects can ensure that bulk carriers operate smoothly and economically, reducing any chance of damage to the safety of the ship or life at sea.