As the name indicates, anti-seizure compounds are special type of compounds which prevent seizure of metal components used on ships.

Seizure of metals may happen due to variety of reasons which includes corrosion, high temperatures, galling, vibration, humid conditions, and caustic environment etc.

It is often found that seafarers have a misunderstanding between the functions of lubricant and anti-seize compound. A lubricant might not have anti-seizing property, however all anti-seizure compounds will definitely have lubricating property, especially at high temperatures. 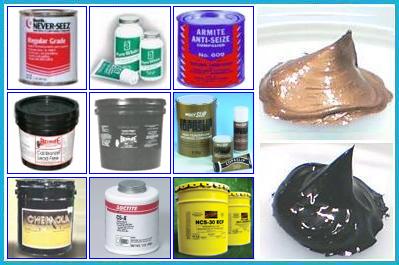 In environmentally adverse conditions such as high humidity and salinity, extreme pressure, acidic atmospheres or excessive temperatures, metals can fuse or weld together.

The chief culprit of seizure of metals is corrosion, particularly in marine surroundings. Corrosion happens due to galvanic action between two metals.

Qualities: Good quality anti-seizing compound would be a thick paste containing lots of active metal ingredients and little of grease.

Zinc based anti-seizure compounds are most suitable for its usage in ambient conditions. At elevated temperatures, copper based ones are commonly used in marine environment.

Copaslip is an anti-seize compound consisting of finely divided copper particles in a non-melting bentone base to which are added highly effective oxidation and corrosion inhibitors. Copaslip is used for mating surfaces which work under high temperatures.

When working under high temperature, the lighter fractions evaporate and leave copper and other contents behind, giving an anti-seize property by preventing galvanic action. Copper being superior metal sacrifices itself and thus prevents metal to metal contact. This compound is used for temperatures up to 1100°C. It contains copper, bentone based non-melting grease, polybutene, and other anti-corrosive additives.

It is commonly used for fuel injector, fasteners, exhaust cover bolts, and other machinery parts which are exposed to extreme temperatures.

Alum slip is similar to copaslip but has aluminum in place of copper. This compound not only withstands high temperature, but also high pressures. It has aluminum, magnesium silicate and graphite, which provide capability to withstand high pressures. It is proven to be effective when used on turbocharger bolts and other high temperature area fasteners.

It is used mainly where both high and low temperature characteristics are expected. This compound contains high nickel content, aluminum, and graphite in a non melting bentone base.

Nickel Slip can withstand temperatures up to 1350 degree Celsius. They ease assembly and disassembly of press fit, sleeve fit and reduce frictional wear.

Molykote or molyslip is widely used throughout the world for all types of industrial applications. It comes in many forms such as a paste, glue, and spray cans. One can also get in bulk as per his requirement and thus can be used with spray gun.

On board ship, these are generally used on all metal components to avoid metal to metal contact. It provides an insulating layer between metals so that dismantling is free from breakage of fused components.

These are used for wide variety of applications whose temperatures ranging from minus 40 degree Celsius to 1100 degrees Celsius.

There are various types of grease that are used for anti-seizing protection on ships. It should be emphasized that grease cannot withstand high temperatures or pressures. However certain special greases can withstand moderate pressures.

Grease mainly helps for lubrication between mating parts. It also has low to moderate anti-seizing property. Grease can be used on metals which are exposed to sea water. Thus grease can prevent corrosion due to salt water by providing a protective layer. Typical usage can be seen on sea water line flange bolts, sea water pump cover bolts etc.

Silicone grease is used on board for corrosion resistance and also to withstand temperature to some extent. Zinc Oxide is a typical form which finds extensive use for general purpose.

Lubricating oil is commonly used for lubrication and to avoid friction between metal components. They also help to carry away heat produced due to friction.

Most of the lube oils possess high thermal stability and corrosion resistance. They also prevent oxidation of metal components. These are mainly used where no other anti-seizing compounds are permitted, e.g. 1. oil casings where other anti-seizing compounds if present would contaminate the oil. e.g. 2. main air compressor bottom end bolts are usually coated with lube oil until otherwise specifically specified by manufacturer.

Since usage of MOS2 and copaslip inside compressor crankcase would contaminate the lube oil, it is suggested to use lubricating oil for the fasteners inside oil casings. At times, the o-rings are coated with lube oil for smooth drag on to the metal surfaces.

These are not commonly claimed anti-seize compound as they perform a function of lubricant than that of anti-seize compound. The usage of Vaseline/petroleum jelly/soft soap is not recommended on screws and fasteners. These cannot be used under high temperature and pressure. However, there are specific manufacturer recommended compounds which are typically used in centrifugal separator bowl assemblies and screws used within them. 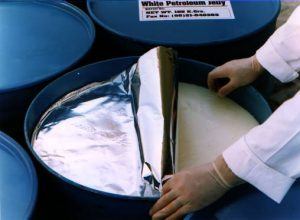 One can usually find such kind of lubricant which has a minimal anti-seizure property, used upon o-rings and main engine maneuvering pneumatic valves. These are areas where perfect cleanliness is essential and usage of other compounds such as copaslip or molyslip would be considered as abrasive in nature.